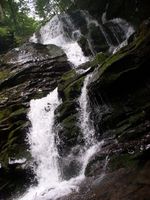 Ukraine has diverse geographic features, including several waterfalls. A vast number of rivers run through the mountain ranges. The snow melt from the mountains feeding the rivers and sudden drops in elevation create many opportunities for waterfalls to form. 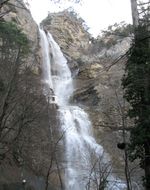 Most of the waterfalls in the Carpathian Mountains are short and cascade waterfalls. The highest waterfall is the Maniava waterfall, located near the Maniava village (Bohorodchany Raion) which is 14 m (46 ft) tall.