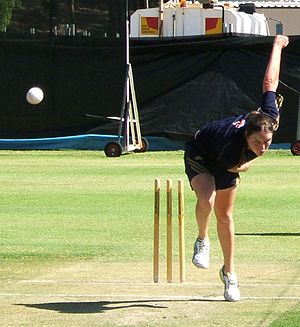 Rene Farrell is the most recent bowler to have taken a hat-trick in a women's Test match.

A hat-trick in cricket is when a bowler takes three wickets from consecutive deliveries. It is a relatively rare feat,[1] and has occurred sixteen times in the history of women's international cricket.[lower-alpha 1] The first hat-trick was taken in a Test match between Australia and England in February 1958, by Australia's Betty Wilson.[5] The most recent bowler to achieve the feat was the Sri Lankan Left-arm orthodox spiner, Inoka Ranaweera, against New Zealand during a One Day International (ODI) in November 2015.[lower-alpha 1]

Two further hat-tricks have been taken in women's Tests; by Pakistan's Shaiza Khan in 2004, and Australia's Rene Farrell in 2011.[2] Farrell's hat-trick is one of four in women's international cricket that did not involve a fielder, as two of the batsmen were dismissed leg before wicket (lbw), and one was bowled.[6] Sana Mir's T20I hat-trick in 2015 similarly contained two lbws and one bowled, while Julie Harris' One Day International (ODI) hat-trick during the 1993 Women's Cricket World Cup was made up of three consecutive lbws and Dane van Niekerk (ODI) hat-trick in 2013 had two bowled and one lbw.[7] The first hat-trick in women's One Day Internationals was made just six days prior to Harris', by Carole Hodges, during the same competition. Those remain the only hat-tricks to have been taken in women's World Cups,[3] though Ekta Bisht took a hat-trick for India during the 2012 Women's World Twenty20, the equivalent competition for women's Twenty20 International cricket.[8]

No player has taken multiple hat-tricks in international women's cricket, and similarly no venue has hosted more than one hat-trick. English and Pakistani bowlers have taken more hat-tricks than any other nations; three bowlers from each nation have achieved the feat. Eight hat-tricks have been taken in ODIs, while all five of the hat-tricks in T20I matches have happened since the most recent instance in women's Tests.[lower-alpha 1]

1 Dane van Niekerk took 4 wickets in 5 balls during this spell. She dismissed Shemaine Campbelle (st †Trisha Chetty) and bowled a dot ball right before she took the hat-trick.