The Lithuanian Air Force or LAF (Lithuanian: Lietuvos karinės oro pajėgos (LK KOP)) is the military aviation branch of the Lithuanian armed forces. It is formed from professional military servicemen and non-military personnel. Units are located at Šiauliai military airfield near the city Šiauliai, at Radviliškis and Kaunas.

After the declaration of Lithuania to be an independent state on February 16, 1918, the most urgent task of the new government was to organize a military force that could repel enemy armies that were coming from all sides. The first order for the creation of a Lithuanian army came on November 23, 1918.

In January 1919, an Engineering Company was formed within the military, which contained an Aviation Squad.[1] On March 12, 1919, the group was reorganized into an Aviation Company and became an independent military unit. Its leader was appointed to be marine engineer officer Petras Petronis. This date is considered to be the birthday of the Lithuanian Air Force.

Between March and December 1919 and between 1932 and 1940, the Kaunas Military Aviation School operated in that city. The school trained officers in many aviation disciplines: pilots, observers, gunners and mechanics.

The first aircraft (Sopwith 1½ Strutter) was taken by the Lithuanian military from the Red Army, on February 5, 1919, at the city of Jieznas. On February 27, 1919, eight new reconnaissance aircraft, LVG C.VI, were received. They had been purchased in Germany. In June, five more aircraft were purchased. In the following years some aircraft were taken as war booty and repaired in Lithuanian Aviation workshops, many were purchased from various countries and a number were built by native designers Jurgis Dobkevičius and Antanas Gustaitis.

Starting in 1920 the military aviation branch was renamed a number of times and some time after 1928 it was named to the equivalent of the Lithuanian Air Force.

The Lithuanian Air Force supported and encouraged various aeronautics related activities, such as the sport of gliding. In 1933, in cooperation with Aero Club of Lithuania, they helped establish a Lithuanian Gliding School in Nida and send their only experienced glider pilot, Gregorius Radvenis, to be the school's instructor and supervisor.

In 1940, the Lithuanian Air Force consisted of eight Air Squadrons, including reconnaissance, fighter, bomber and training units. Air Force bases had been established in the cities and towns of Kaunas /Žagariškės, Šiauliai /Zokniai (Zokniai airfield), Panevėžys /Pajuostis. In the summer time, airports in the cities of Palanga and Rukla were also used. A total of 117 aircraft and 230 pilots and observers were listed in the books at that time. 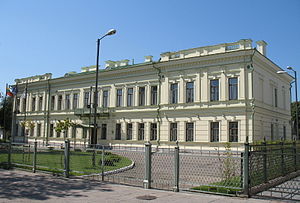 On 23 January 1992, the Minister of Defense signed an order establishing the staff for the Aviation Base of the Aviation Service. But an actual base in the Šiauliai airport territory (Barysiai airfield) was not established until March, when according to the ordinance of the Government of Lithuanian Republic, all the infrastructure, buildings, territory and 24 An-2 aircraft were passed from ”Lithuanian Airlines" to the Aviation Service of the Ministry of Defense in January 1992.
On 12 June 1992, the first time after regaining the independence of Lithuania, An-2 aircraft, marked with the double cross of Vytis on its wings – the distinguishing sign of Lithuanian Air Force – took off from Barysiai airfield. This date is considered to be the Aviation Base foundation date. In February 1993 four L-39C Albatros aircraft were brought from Kyrgyzstan.

The Lithuanian Air Force Headquarters and the Airspace Surveillance and Control Command are located in Kaunas, while the Air Space Control Centre is stationed nearby in Karmėlava. Air Base and Air Force Armament and Equipment Repair Depot are located in Šiauliai. The Air defence battalion, formed in 2000, is located in the Radviliškis district.

Development of infrastructure is one key missions of the Air Defence Battalion currently in the stage of development.

The Airspace Surveillance and Control Command works closely with the Baltic States Air Surveillance System, BALTNET. The appropriate legal documentation of the BALTNET project was developed, the Reciprocal Memorandum of Understanding concerning military personnel training was signed among Lithuanian, Estonian, Latvian, and Danish Ministries of Defence. The Regional Air Spaces Surveillance Co-ordination Centre (RASSCC), headquarters of the BALTNET project, was established in the LTAF Airspace Control Centre and has been fully functioning since early 2000. Military personnel from all the three Baltic States serve as air surveillance operators at the centre and rotate according to national timetables. The Commander of the centre is appointed for two years and represents one of the Baltic States.

The main tasks of Armament and Equipment Repair Depot:

After Lithuania joined NATO organization back in 2004, its (alongside Latvia's and Estonia's) air space is protected by NATO. NATO members provide usually 4 fighter aircraft, based in Lithuania, to police the Baltic States’ airspace. The deployments rotate between NATO members (that started in March 2004 with Belgium Air Force F-16s) and most NATO members that operate fighters have made a deployment to Lithuania. The Baltic States are considering in the near future to protect their airspace on their own.

In line with the set priorities, the Lithuanian Air Force are implementing modernisation plans. Since Independence in 1991, the Lithuanian Air force has bought 3 new C-27J Spartan military transport aircraft. They have replaced the older Soviet-era An-26.
Two L-39ZA aircraft underwent extension of technical resources in Romania 2007. Maintenance works included exhaustive check-up of the aircraft units and major engine repairs. New navigation equipment GNS 530 was installed and radio communication sets changed in pilot cabins. These planes are used to train fighter control officers in air policing mission and fighter command officers.[2] Also conducted was a complex program of capital overhaul, upgrade and modernisation of the Air Force's helicopters Mi-8 and twin engine short-range transport aircraft L-410.[3][4] There are also plans put forward by the Lithuanian Government to renew the helicopter fleet in 2014-2015. In 2013 up to 3 Eurocopter AS565 Panther were ordered from France for 72 million US-Dollar. Delivery is planned from 2015. The deal is financed by the EU[5] and these 3 new helicopters will be the first new air assets for the growing air service. 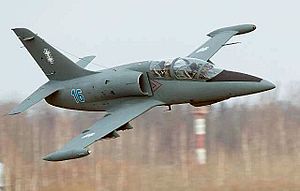 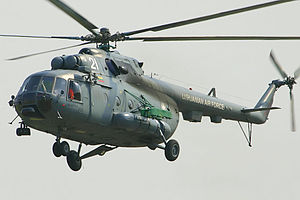 Pervious aircraft operated by the Air Force consisted of the An-2 Colt, An-26 Curl, PZL-104 Wilga, and the Mil Mi-2 helicopter[8]

As of this edit, this article uses content from "Lithuanian Air Force", which is licensed in a way that permits reuse under the Creative Commons Attribution-ShareAlike 3.0 Unported License, but not under the GFDL. All relevant terms must be followed.