Established on 21 July 1940 as a puppet state,[1] during World War II in the territory of the previously independent Republic of Lithuania after it had been occupied by the Soviet army on 16 June 1940, in conformity with the terms of the 23 August 1939 Molotov–Ribbentrop Pact.

There had been an unsuccessful attempt to establish a Soviet government in Lithuania by the Bolshevik Red Army in 1918–1919. The Lithuanian SSR was first proclaimed on 16 December 1918, by the provisional revolutionary government of Lithuania, formed entirely by the Communist Party of Lithuania. The Lithuanian SSR was supported by the Red Army, but it failed to create a de facto government with any popular support as the Council of Lithuania had successfully done earlier. Two months later on 27 February 1919, it was joined by the Soviet Socialist Republic of Byelorussia and they proclaimed the Lithuanian–Belorussian Soviet Socialist Republic (LBSSR or Litbel), which existed for only six months, until 25 August 1919.

The Russian Soviet Federated Socialist Republic officially recognized the Republic of Lithuania by signing the Soviet–Lithuanian Peace Treaty on 12 July 1920, thus ending the existence of the fledgling Soviet Republic. It has been suggested that the failure to conquer Poland in the Polish–Soviet War prevented the Soviets from invading Lithuania and re-establishing a Soviet republic at the time.[2][3]

Main articles: Molotov–Ribbentrop Pact and Occupation of the Baltic states

The Molotov–Ribbentrop Pact of August 1939, between Nazi Germany and the Soviet Union, stated that Lithuania was to be included into the German "sphere of influence". However soon after World War II began in September 1939, and the agreement was amended to transfer Lithuania to the Soviet sphere.[4] This was granted in exchange for Lublin and parts of the Warsaw province of Poland, originally ascribed to the Soviet Union, but by that time already occupied by German forces.

Following the 1940 Soviet ultimatum to Lithuania and subsequent invasion of 15 June 1940, President Antanas Smetona fled the country. Before doing so, in accordance with the Lithuanian constitution, he turned over his duties on a provisional basis to Prime Minister Antanas Merkys. The day after Smetona's departure, Merkys announced he had deposed Smetona and had taken over the presidency in his own right. On 17 June, at the behest of the Soviets, Merkys appointed a left-wing journalist, Justas Paleckis, as prime minister. Merkys then himself resigned, making Paleckis acting president as well. For all intents and purposes, Lithuania had lost its independence.

Paleckis appointed a Communist-dominated "people's government" with Vincas Krėvė-Mickevičius as prime minister. This government dissolved the Fourth Seimas and announced elections for a "People's Seimas" on 14 July. Voters were selected with a single list provided by the "Union of the Working People of Lithuania," which was merely a front for the recently re-emerged Communist Party of Lithuania. The new People's Seimas met on 21 July and had only one piece of business—a resolution that transformed Lithuania into the Lithuanian Soviet Socialist Republic and petitioned the Soviet Union to admit it as a constituent republic. This resolution carried unanimously. On 3 August, the Supreme Soviet of the USSR "accepted" the petition and admitted the Lithuanian SSR as the 14th republic of the Soviet Union. Lithuania now maintains that since Smetona never resigned, Merkys' takeover of the presidency was illegal, and all actions leading to the Soviet annexation were therefore ipso facto void.

Lithuania was subsequently invaded and occupied by Nazi Germany in June 1941. With the 1944 Soviet Baltic offensive, Soviet rule was re-established in July 1944. After both Soviet occupations, mass deportation of the Lithuanians into gulags and other forced settlements ensued. 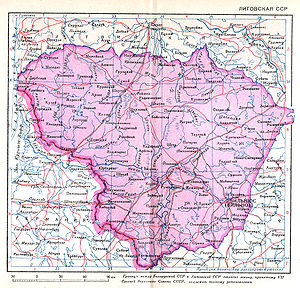 1940 Soviet map of the Lithuanian SSR

The United States, United Kingdom, and other countries considered the occupation of Lithuania by the USSR illegal, citing the Stimson Doctrine, in 1940, but agreed not to forcibly violate frontiers of the USSR at post-World War II conferences. The United States refused to recognize the annexation of Lithuania or the other Baltic States, by the Soviet Union, at any time of the existence of the USSR.

Lithuania contended that the entire process by which Lithuania joined the Soviet Union violated both Lithuanian and international law so it was merely reasserting an independence that previously existed. The Soviet Union threatened to invade, but the Russian SFSR's declaration of sovereignty on June 12 meant that the Soviet Union could not enforce Lithuania's retention.

Collectivization in the Lithuanian SSR took place between 1947 and 1952.[5]

The 1990 per capita GDP of the Lithuanian Soviet Socialist Republic was $8,591, which was above the average for the rest of the Soviet Union of $6,871.[6] This was still half or less than half of the per capita GDPs of adjacent countries Norway ($18,470), Sweden ($17,680) and Finland ($16,868).[6] Overall, in the Eastern Bloc, the inefficiency of systems without competition or market-clearing prices became costly and unsustainable, especially with the increasing complexity of world economics.[7] Such systems, which required party-state planning at all levels, ended up collapsing under the weight of accumulated economic inefficiencies, with various attempts at reform merely contributing to the acceleration of crisis-generating tendencies.[8]