The Lithuanian partisans were partisans who waged a guerrilla warfare in Lithuania against the Soviet Union in 1944–1953. Similar anti-Soviet resistance groups, also known as Forest Brothers and cursed soldiers, fought against Soviet rule in Estonia, Latvia, Poland, Romania and Galicia. It is estimated that a total of 30,000 Lithuanian partisans and their supporters were killed.[1]

At the end of World War II, the Red Army pushed the Eastern Front towards Lithuania. The Soviets invaded and occupied Lithuania by the end of 1944. As forced conscription into Red Army and Stalinist repressions intensified, thousands of Lithuanians used forests in the countryside as a natural refuge. These spontaneous groups became more organized and centralized culminating in the establishment of the Union of Lithuanian Freedom Fighters in February 1948. In their documents, the partisans emphasized that their ultimate goal is recreation of independent Lithuania. As the partisan war continued, it became clear that the West would not interfere in Eastern Europe (see Western betrayal) and that the partisans had no chance of success against the far stronger opponent. Eventually, the partisans made an explicit and conscious decision not to accept any new members. The leadership of the partisans was destroyed in 1953 thus effectively ending the partisan war, though individual fighters held out until the 1960s.

Lithuania had regained its independence in 1918 after the collapse of the Russian Empire. As pre-war tensions rose in Europe, Nazi Germany and Soviet Union signed the Molotov–Ribbentrop Pact and divided Eastern Europe into spheres of influence. Subsequently, Lithuania was occupied by the Soviet Union in June 1940. The Soviets instituted Sovietization policies and repressions. In June 1941, the Soviets deported over 17,000 Lithuanians for forced labor to remote areas in Siberia. When a few days later Germany launched an invasion of Russia, Lithuanians organized a popular anti-Soviet uprising. Initially, the Lithuanians greeted the Germans as liberators from the repressive Soviet rule and made plans to reestablish independent Lithuania. However, the attitudes soon changed as the occupation of Lithuania by Nazi Germany continued.

Unlike Estonia and Latvia where the Germans conscripted the local population into military formations within Waffen-SS, Lithuania boycotted German recruitment calls and never had its own Waffen-SS division. In 1944, the Nazi authorities created a 10,000-strong Lithuanian Territorial Defense Force under General Povilas Plechavičius to combat Soviet partisans led by Antanas Sniečkus and Polish partisans (Leśni). The Germans, however, quickly came to see this force as a nationalist threat to their occupation regime. The senior staff were arrested on May 15, 1944, and General Plechavičius was deported to the concentration camp in Salaspils, Latvia. However, approximately half of the remaining Defense Force formed guerrilla units and dissolved into the countryside in preparation for partisan operations against the Soviet Army as the Eastern Front approached.[2][3] These men formed the basis for the Lithuanian partisans. 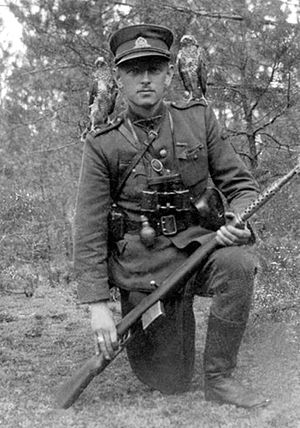 The resistance in Lithuania was well organized, and the uniformed with chain of command guerrilla units were effectively able to control whole regions of the countryside until 1949. Their armaments included Czech Skoda guns, Russian Maxim heavy machine guns, assorted mortars and a wide variety of mainly German and Soviet light machine guns and submachine guns.[2] When not in direct battles with the Soviet Army or special NKVD units, they significantly delayed the consolidation of Soviet rule through ambush, sabotage, assassination of local Communist activists and officials, freeing imprisoned guerillas, and printing underground newspapers.[4] Captured Lithuanian Forest Brothers themselves often faced torture and summary execution while their relatives faced deportation to Siberia (cf. quotation). Reprisals against pro-Soviet farms and villages were harsh. The NKVD units, Destruction battalions (known by the Lithuanians as pl. stribai, from the Russian: izstrebiteli - destroyers) used shock tactics to discourage further resistance such as displaying executed partisans' corpses in village courtyards.[2][5]

In the first year of the partisan warfare, while World War II was still ongoing, about 10,000 Lithuanians were killed – about half of the total deaths. Men avoided conscription to the Red Army and instead hid in the forests and spontaneously joined the Lithuanian partisans. Not all groups were armed or intended to actively fight the Soviets. Partisan groups were relatively large, 100 men and more. There were several larger open engagements between the partisans and NKVD, including those in Kalniškė, Paliepiai, Seda, Virtukai. Since the Soviets had not yet established their control, the partisans were able to control villages and towns.

In July 1945, after the end of World War II, the Soviets announced "amnesty" and "legalization" campaign for those hiding in the forests to avoid conscription. According to a Soviet report from 1957, in total 38,838 people came forward under the campaign (8,350 of them were classified as "armed nationalist bandits" and 30,488 as deserters avoiding conscription).

In the second stage of the partisan warfare, the partisan groups became smaller but better organized. They organized themselves into units and districts and sought better centralization. The territory of Lithuania was divided into three regions and nine districts (Lithuanian: apygarda):

Open engagements with NKVD/MGB were replaced by more clandestine activities. It was important to keep people's spirits. Therefore, the partisans hid in bunkers and engaged in more political and propaganda activities. In particular they protested and disrupted elections to the Supreme Soviet of the Soviet Union in February 1946 and to the Supreme Soviet of the Lithuanian SSR in February 1947. They published various bulletins, leaflets, newspapers. In total, there were almost 80 different periodicals published by the partisans. MGB also changed its tactics. It began to recruit agents and organize destruction battalions. The partisans responded by organizing reprisal actions against the collaborators with the Soviets. It is estimated that the partisans killed a total of 19,000 such collaborators. This aspect of the partisan warfare allowed the Soviets to portray the guerrilla fighters as "murderous bandits" and remains controversial to this day.

In February 1948, partisan leaders met in the village of Minaičiai and established the centralized command, the Union of Lithuanian Freedom Fighters. Brigadier General Jonas Žemaitis was elected as its chairman. On February 16, 1949, the 31st anniversary of the Act of Independence of Lithuania, the Joint Staff of the Union of Lithuanian Freedom Fighters signed a declaration on the future of Lithuania. The declaration stated that reinstated Lithuania should be a democratic state, that would grant equal rights for every citizen, based on freedom and democratic values. It did declare that Communist party is a criminal organization. The document of the declaration has survived and was preserved by the KGB. In 1999, the Lithuanian Seimas (parliament) formally recognized this declaration as Declaration of Independence.

Juozas Lukša was among those who managed to escape to Western states; he wrote his memoirs there and was killed after having returned to occupied Lithuania in 1951. By the early 1950s, the Soviet forces had eradicated most of the Lithuanian nationalist resistance. Intelligence gathered by the Soviet spies in the West and KGB infiltrators within the resistance movement, in combination with large-scale Soviet operations in 1952 managed to end the campaigns against them.

Adolfas Ramanauskas (code name Vanagas), the last official commander of the Union of Lithuanian Freedom Fighters, was arrested in October 1956 and executed in November 1957. The last Lithuanian anti-Soviet resistance fighters killed in action were Pranas Končius (code name Adomas) and Kostas Liuberskis (code name Žvainys). Končius was killed on July 6, 1965 (some sources indicate he shot himself in order to avoid capture) and awarded the Cross of Vytis in 2000. Liuberskis was killed on October 2, 1969; his fate was unknown until the late 2000s.[7] Stasys Guiga (code name Tarzanas) died in hiding in 1986.[8] 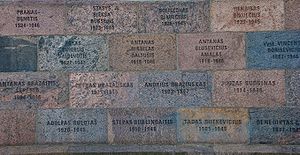 Wall of former KGB headquarters in Vilnius inscribed with names of those tortured and killed in its basement (now Museum of Genocide Victims).

Many nationalist partisans persisted in the hope that Cold War hostilities between the West, which never formally recognized the Soviet occupation, and the Soviet Union might escalate to an armed conflict in which Lithuania would be liberated. This never materialized, many of the surviving former partisans remained bitter that the West did not take on the Soviets militarily.[9]

As the conflict was relatively undocumented by the Soviet Union (the Lithuanian fighters were never formally acknowledged as anything but "bandits and illegals"), some consider it and the Soviet-Lithuanian conflict as a whole to be an unknown or forgotten war.[2][10][11] Discussion of resistance was suppressed under the Soviet regime. Writings on the subject by the Lithuanian emigrants were often labelled as examples of "ethnic sympathy" and disregarded.[12]

In Lithuania, freedom fighter veterans receive a state pension. The third Sunday in May is commemorated as Partisan's Day. As of 2005, there were about 350 surviving partisans in Lithuania.[13]

The 1966 film Nobody Wanted to Die (Lithuanian: Niekas nenorėjo mirti) by Soviet-Lithuanian film director Vytautas Žalakevičius shows the tragedy of the conflict in which "a brother goes against the brother". Despite being shot from a Soviet perspective, the film gives many hints that allude to the possibility of alternative points of view. The film brought acclaim to Žalakevičius, and to a number of young Lithuanian actors starring in the film.

The 2005 documentary film Stirna tells the story of Izabelė Vilimaitė (codenames Stirna and Sparnuota), an American-born Lithuanian who moved to Lithuania with her family in 1932. A medical student and pharmacist, she was an underground medic and source of medical supplies for the partisans, eventually becoming a district liaison. She infiltrated the local Komsomol (Communist Youth), was discovered, captured, and escaped twice. After going underground full-time, she was suspected of having been turned by the KGB as an informant and was nearly executed by the partisans. Her bunker was eventually discovered by the KGB and she was captured a third time, interrogated and killed.[14][15]

In 2014 The Invisible Front, a documentary focusing on Juozas Luksa, was released in the US.[16]