From Infogalactic: the planetary knowledge core
Jump to: navigation, search
For the area of London, see Little Russia, London 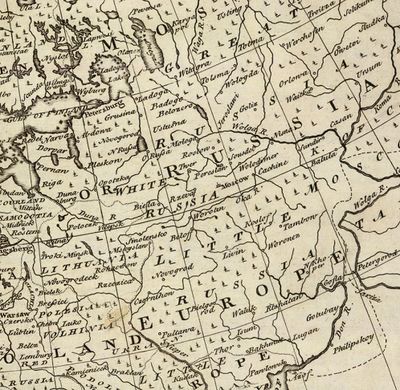 A fragment of the “new and accurate map of Europe collected from the best authorities...” by Emanuel Bowen published in 1747 in his A complete system of geography. Left-bank Ukraine is shown as “Little Russia”. Great, White, and Red Russias are also seen, and the legend “Ukrain” straddles the Dnieper river near Poltava.

With time it developed into a political and geographical term in the Russian language referring to most of the territory of modern-day Ukraine before the twentieth century. Accordingly, derivatives such as "Little Russian" (Russian: малоросский) were commonly applied to the people, language, and culture of the area. Prior to the revolutionary events of 1917 a large part the region's elite population were followers of Little Russian identity which competed with the local Ukrainian identity. After the collapse of the Russian Empire, and with the amalgamation of Ukrainian territories into one administrative unit the word was phased out of circulation and when used took on a derogatory connotation denoting those Ukrainians with little or no national consciousness. The term retains currency among Russian monarchists and nationalists who deny that Ukraine and Ukrainians are distinct from Russia and Russians. Because Ukraine and its people have undergone the process of nation-building over the last seven hundred years, Little Russia, even in the historic context, can only loosely be considered an equivalent for the word Ukraine.[citation needed] By the late 1980s, the term had become an archaic one, and its anachronistic usage was considered strongly offensive by Ukrainians.[3]

For more details on this topic, see Rus (name).

The toponym translates as Little or Lesser Rus’ and is adapted from the Greek term, used in medieval times by patriarchs of Constantinople since the fourteenth century (it first appeared in church documents in 1335). The Byzantines called the northern and southern part of the lands of Rus’ as: Μεγάλη Ῥωσσία (Megálē Rhōssía)[4] – Greater Rus’) and Μικρὰ Ῥωσσία (Mikrà Rhōssía – Lesser or Little Rus’), respectively. Initially Little or Lesser meant the smaller part,[5] as after the division of the united Rus' metropolis (ecclesiastical province) into two parts in 1305, a new southwestern metropolis in the land of Halych-Volynia consisted of only 6 of the 19 former eparchies.[5] Later it lost its ecclesiastical meaning and became a fully geographic name.[5]

In the seventeenth century the term Malorossiya was introduced into Russian. In English the term is often translated Little Russia or Little Rus’, depending on the context.[6] 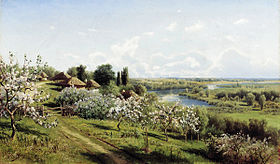 The first recorded usage of the term is attributed to Boleslaus George II of Halych.[7] He styled himself «dux totius Rusiæ Minoris» in a letter to Dietrich von Altenburg, the Grand Master of the Teutonic Knights in 1335.[7] The name was used by Patriarch Callistus I of Constantinople in 1361 when he created two metropolitan sees: the one called Great Rus' in Vladimir and Kiev and the other one called Little Rus' with the centers in Galich (Halych) and Novgorodok (Navahrudak).[7] The king Casimir III of Poland, was called "the king of Lechia and Little Rus'".[7] According to Mykhaylo Hrushevsky Little Rus' was the Halych-Volhynian Principality, and after its downfall, the name ceased to be used.[8]

In the post-medieval period, the name of Little Rus' is known to first be used by Eastern Orthodox clergy of the Polish-Lithuanian Commonwealth, for example by influential cleric and writer Ioan Vyshensky (1600, 1608), Metropolitan Matthew of Kiev and All Rus' (1606), Bishop Ioann (Biretskoy) of Peremyshl, Metropolitan Isaiah (Kopinsky) of Kiev, Archimandrite Zacharius Kopystensky of Kiev Pechersk Lavra, etc.[9] The term has been applied to all Orthodox Ruthenian lands of Polish-Lithuanian Commonwealth.[9] Vyshensky addressed to "the Christians of Little Russia, brotherhoods of Lvov and Vilna" and Kopystensky wrote "Little Russia, or Kiev and Lithuania".[9]

The term was adopted in seventeenth century by Tsardom of Russia to refer to the Cossack Hetmanate of Left-bank Ukraine, when the latter fell under Russian protection after the Treaty of Pereyaslav (1654). From 1654 to 1721, the official title of Russian Tsars, gained the wording (literal translation): "The Sovereign of all Rus': the Great, the Little, and the White."

The term Little Rus' has been used in letters of the Cossack Hetmans Bohdan Khmelnytsky[10] and Ivan Sirko.[11][12] The Archimandrite of the Kiev-Pechersk Lavra Innokentiy Gizel wrote that the Russian people is a unity of three branches: Great Russia, Little Russia and White Russia under the only legal authority of the Moscow Tsars. The term Little Russia has been used in Ukrainian chronicle by Samiylo Velychko, in a chronicle of the Hieromonk Leontiy (Bobolinski), in "Thesaurus" by Archimandrite Ioannikiy (Golyatovsky).[13]

The usage of the name was later broadened to apply loosely to the parts of the Right-bank Ukraine when it was annexed by Russia in the end of the eighteenth century upon the partitions of Polish-Lithuanian Commonwealth. In the eighteenth and nineteenth centuries Russian Imperial administrative units the Little Russian Governorate and eponymous General Governorship were formed and existed for several decades before being split and renamed in subsequent administrative reforms.

Up to the very end of the nineteenth century Little Russia was a prevailing designation for much of the modern territory of Ukraine controlled by the Russian Empire as well as for its people and their language as can be seen from its usage in numerous scholarly, literary and artistic works. For instance, "Little Russia" has been preferred by the famous Ukrainian poet Taras Shevchenko in his private diary (1857–1858).[14] Ukrainophile historians Mykhaylo Maksymovych, Nikolay Kostomarov, Dmytro Bahaliy, Volodymyr Antonovych acknowledged the fact that during Russo-Polish wars "Ukraine" had only a geographical meaning of borderlands of both states but "Little Russia" was an ethnic name of Little (Southern) Russian people.[14] In his prominent work "Two Russian nationalities" Kostomarov uses Southern Russia and Little Russia interchangeably.[15] Mykhailo Drahomanov titled his first fundamental historic work "Little Russia in its literature" (1867–1870).[16] Different prominent artists (e.g. Mykola Pymonenko, Konstiantyn Trutovsky, Nikolay Sergeyev, photographer Sergey Prokudin-Gorsky, etc.), many of whom were natives from the territory of modern-day Ukraine, used "Little Russia" in titles of their paintings of Ukrainian landscapes.

The term "Little Russian language" was used by the state authorities in the first Russian Empire Census conducted as late as in 1897.

From Little Russia to Ukraine

For more details on this topic, see Name of Ukraine.

The term Little Russia (that traces its origin to the medieval times) used to be widely used as the name for the geographic territory.[citation needed] Since the middle of the seventeenth century the modern name "Ukraine" (Ukrayina) (first found in the twelfth century chronicles) was used sporadically, until it was reintroduced in the nineteenth century by a conscious effort of several writers concerned with the awakening of the Ukrainian national awareness.[17] It was not until the twentieth century when the modern term "Ukraine" started to prevail while Little Russia gradually fell out of use.

Although originally "Little Russia" (Rus' Minor) was merely a geographic, linguistic and ethnological term, it is now archaic and its usage in the modern context to refer to the country Ukraine and the modern Ukrainian nation, its language, culture, etc., is considered an improper anachronism. Such usage is typically perceived as an imperialist view that the Ukrainian territory and people ("Little Russians") belong to "one, indivisible Russia."[18] Regardless of whether they are aware or not of its origin, today many Ukrainian nationalists consider the term to be disparaging, indicative of an "older brother" attitude,[citation needed] and of imperial Russian (and Soviet) suppression of the Ukrainian national idea. In particular, it has continued to be used in Russian national discourse, where modern Ukrainians are presented as a single people in a united Russian nation.[19] This added new hostility and disapproval of the term by some Ukrainians.[17]

Some Ukrainian authors define "Little Russianness" (Ukrainian: малоросійство, malorosiystvo) as a provincial complex they see in parts of the Ukrainian community due to its lengthy existence within the Russian Empire and describe it as an "indifferent, and sometimes a negative stance towards Ukrainian national-statehood traditions and aspirations, and often as active support of Russian culture and of Russian imperial policies".[20] Mykhailo Drahomanov, who used the terms Little Russia and Little Russian in his historical works,[16] applied the term Little Russianness to Russified Ukrainians, whose national character was formed under "alien pressure and influence", and who consequently adopted predominantly the "worse qualities of other nationalities and lost the better ones of their own".[20] Ukrainian conservative ideologue and politician Vyacheslav Lypynsky defined the term as "the malaise of statelessness".[21] The same inferiority complex applied to the Ukrainians of Galicia with respect to Poland ("gente ruthenus, natione polonus"). The related term Magyarony applied to Magyarized Rusyns in Carpathian Ruthenia who advocated for the union of that region with Hungary.[20]

Another criticized aspect labeled as "Little Russianness" is a stereotypical image of uneducated, rustic Ukrainians exhibiting little or no self-esteem. Examples of such characterization are popular Ukrainian singer and performer Andriy Danylko whose uncouth stage persona is an embodiment of this perception; Surzhyk-speaking Verka Serduchka has also been seen as perpetuating this demeaning image.[22][23] Danylko himself usually laughs off such criticism of his work and many art critics point instead towards the fact that his success with the Ukrainian public is rooted in an unquestionable authenticity of Danylko's artistic image.[24]