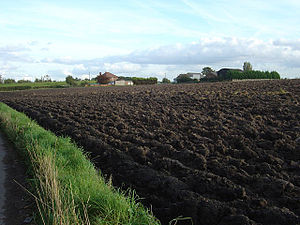 Fine, loam-rich field ideal for farming vegetables in the UK

Loam is soil composed mostly of sand (particle size > 63 µm), silt (particle size > 2 µm), and a smaller amount of clay (particle size < 2 µm). Its composition is about 40%-40%-20% concentration of sand-silt-clay, respectively.[1] These proportions can vary to a degree, however, and result in different types of loam soils: sandy loam, silty loam, clay loam, sandy clay loam, silty clay loam, and loam.[1] In the USDA textural classification triangle, the only soil that is not predominantly sand, silt, nor clay is called "loam". Loam soils generally contain more nutrients, moisture, and humus than sandy soils, have better drainage and infiltration of water and air than silty soils, and are easier to till than clay soils. The different types of loam soils each have slightly different characteristics, with some draining liquids more efficiently than others. For food production, a loam soil containing a small amount of organic material is considered ideal. The mineral in a loam soil ideally is about 40% sand, 40% silt and 20% clay by weight. The soil's texture, especially its ability to retain nutrients and water are crucial.[2]

Bricks made of loam, mud, sand, and water, with an added binding material such as rice husks or straw, have been used in construction since ancient times.

Loam is considered ideal for gardening and agricultural uses because it retains nutrients well and retains water while still allowing excess water to drain away.[3] A soil dominated by one or two of the three particle size groups can behave like loam if it has a strong granular structure, promoted by a high content of organic matter. However, a soil that meets the textural definition of loam can lose its characteristic desirable qualities when it is compacted, depleted of organic matter, or has clay dispersed throughout its fine-earth fraction.[clarification needed]

Loam is found in a majority of successful farms in regions around the world known for their fertile land.[citation needed] Loam soil feels soft and crumbly and is easy to work over a wide range of moisture conditions.

Use in house construction

Loam may be used for the construction of houses, for example in loam post and beam construction.[4] Building crews can build a layer of loam on the inside of walls, which can help to control air humidity. Loam, combined with straw, can be used as a rough construction material to build walls. This is one of the oldest technologies for house construction in the world. Within this there are two broad methods: the use of rammed earth, or unfired bricks (adobe).[5] 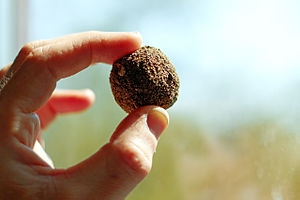 In guerilla gardening, smaller or larger seed balls—made from 3 parts of clay, 1 part of potting compost, and 1 part of various region-specific seeds—are used to enrich areas that may benefit from wildflowers and biodiversification. 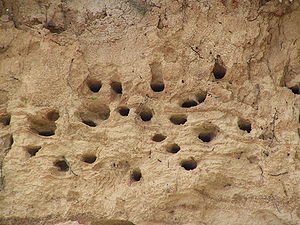 Naturally occuring suitable loam formations are use by diverse animals, like insects, birds, or rodents, as breeding places.