Loftus Versfeld Stadium is a rugby and association football stadium situated in the Arcadia suburb of Pretoria, Gauteng, South Africa. The stadium has a capacity of 51,762 for rugby union. It is occasionally used for local football matches as well.

The stadium was named after Robert Loftus Owen Versfeld, the founder of organized sports in Pretoria. Through the years the stadium has undergone various name changes as sponsors came and went, though locals have always referred to the stadium as Loftus Versfeld. From 11 June 1998 to 4 February 2003 the stadium was officially named Minolta Loftus after Minolta became the stadium's name sponsor. Sponsorship was taken over by security giant Securicor, who announced the name Securicor Loftus on 5 February 2003. On 1 September 2005 the renaming process went full circle when cellular provider Vodacom, taking over sponsorship from Securicor, renamed the stadium back to the original Loftus Versfeld. 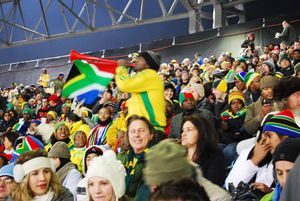 The site of the stadium was first used for sports in 1906, and the field was simply called the Eastern Sports Ground. The first concrete structure was erected there by the City Council in 1923. The original structure could only accommodate 2000 spectators, and did not have proper sports facilities.

In 1928, mostly because of the All Blacks tour to South Africa that year, the Pretoria sub-union made a large profit which they used to erect changing rooms and toilets.

When Mr Loftus Versfeld died suddenly in May 1932 the Pretoria sub-union renamed the Eastern Sports Ground after him as a tribute to a man that had done so much to develop sport in the area. The stadium has been known as Loftus Versfeld Stadium ever since. It has been upgraded on several occasions, most recently in 1984, when the Northern Pavilion received an upgrade.

Loftus Versfeld now has a large amount of world-class facilities which make it a wonderful place to play, or to watch sport matches or events. There are many suites for enjoying a hospitality package, accessible restrooms, numerous food kiosks as well as many areas outside of the stadium for alcoholic beverages. The stadium is a non-smoking stadium and patrons are not allowed to access the stadium seating areas with alcohol. Loftus Versfeld has many great viewing points all over the stadium, making it an easy venue to view any kind of sports event.

Loftus hosted some matches during the 1995 Rugby World Cup.

Loftus Versfeld was one of the venues for the 2009 FIFA Confederations Cup.[1] It hosted the Group B matches USA vs. Italy, USA vs. Brazil and Brazil vs. Italy.[2]

Minimal upgrading was undertaken in order for Loftus Versfeld to qualify as a venue for first and second round matches for the 2010 FIFA World Cup.[3][4] The floodlights, sound system, scoreboards and stadium roof were improved, as roads and parking facilities around it.[3][5] While expected to be finished in August 2008,[3] renovation was completed in January 2009.[6]

The stadium has hosted many musical events including concerts by UB40 and Robbie Williams' Close Encounters Tour on 17 April 2006 with an attendance of over 56,000. Canadian superstar Celine Dion also performed as part of her Taking Chances Tour a two-night stand at the stadium on 16 and 17 February 2008 with a total attendance of about 80,000.

On 20 October 1979, South African Heavyweight boxer Gerrie Coetzee challenged the unbeaten American Heavyweight John Tate for the vacant WBA World Heavyweight title in front of a crowd of 80,000 people. Despite massive support within the stadium Coetzee lost on points to the American.