From Infogalactic: the planetary knowledge core
Jump to: navigation, search
This article is about NOR in the logical sense. For the electronic gate, see NOR gate. For other uses, see Nor.
"Peirce arrow" redirects here. It is not to be confused with Pierce-Arrow, an automobile manufacturer. 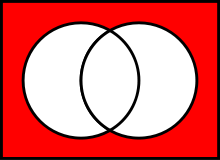 (nor part in red)

In boolean logic, logical nor or joint denial is a truth-functional operator which produces a result that is the negation of logical or. That is, a sentence of the form (p NOR q) is true precisely when neither p nor q is true—i.e. when both of p and q are false. In grammar, nor is a coordinating conjunction.

The NOR operator is also known as Peirce's arrow — Charles Sanders Peirce introduced the symbol ↓ for it,[1] and demonstrated that the logical NOR is completely expressible: by combining uses of the logical NOR it is possible to express any logical operation on two variables. Thus, as with its dual, the NAND operator (a.k.a. the Sheffer stroke — symbolized as either | or /), NOR can be used by itself, without any other logical operator, to constitute a logical formal system (making NOR functionally complete). It is also known as Quine's dagger (his symbol was †), the ampheck (from Greek αμφηκης, cutting both ways; compare amphi-) by Peirce,[2] or "neither-nor".

One way of expressing p NOR q is

signifies OR and the bar signifies the negation of the expression under it: in essence, simply

. Other ways of expressing p NOR q are Xpq, and

The computer used in the spacecraft that first carried humans to the moon, the Apollo Guidance Computer, was constructed entirely using NOR gates with three inputs.[3]

The truth table of A NOR B (also written as A ↓ B) is as follows:

Logical NOR does not possess any of the five qualities (truth-preserving, false-preserving, linear, monotonic, self-dual) required to be absent from at least one member of a set of functionally complete operators. Thus, the set containing only NOR suffices as a complete set.

NOR has the interesting feature that all other logical operators can be expressed by interlaced NOR operations. The logical NAND operator also has this ability.

is the negation of the disjunction:

, the usual operators of propositional logic are: