In logic and mathematics, the logical biconditional (sometimes known as the material biconditional) is the logical connective of two statements asserting "p if and only if q", where q is an antecedent and p is a consequent.[1] This is often abbreviated p iff q. The operator is denoted using a doubleheaded arrow (↔), a prefixed E (Epq), an equality sign (=), an equivalence sign (≡), or EQV. It is logically equivalent to (p → q) ∧ (q → p), or the XNOR (exclusive nor) boolean operator. It is equivalent to "(not p or q) and (not q or p)". It is also logically equivalent to "(p and q) or (not p and not q)", meaning "both or neither".

In the conceptual interpretation, a = b means "All a 's are b 's and all b 's are a 's"; in other words, the sets a and b coincide: they are identical. This does not mean that the concepts have the same meaning. Examples: "triangle" and "trilateral", "equiangular trilateral" and "equilateral triangle". The antecedent is the subject and the consequent is the predicate of a universal affirmative proposition.

In the propositional interpretation, a ⇔ b means that a implies b and b implies a; in other words, that the propositions are equivalent, that is to say, either true or false at the same time. This does not mean that they have the same meaning. Example: "The triangle ABC has two equal sides", and "The triangle ABC has two equal angles". The antecedent is the premise or the cause and the consequent is the consequence. When an implication is translated by a hypothetical (or conditional) judgment the antecedent is called the hypothesis (or the condition) and the consequent is called the thesis.

Logical equality (also known as biconditional) is an operation on two logical values, typically the values of two propositions, that produces a value of true if and only if both operands are false or both operands are true.

The truth table for

More than two statements combined by

may be meant as

or may be used to say that all

are together true or together false:

Only for zero or two arguments this is the same.

The following truth tables show the same bit pattern only in the line with no argument and in the lines with two arguments: 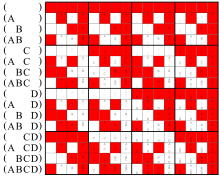 meant as equivalent to

The central Venn diagram below,
and line (ABC  ) in this matrix
represent the same operation. 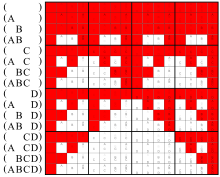 meant as shorthand for

The Venn diagram directly below,
and line (ABC  ) in this matrix
represent the same operation.

The left Venn diagram below, and the lines (AB    ) in these matrices represent the same operation.

Red areas stand for true (as in

distributivity: Biconditional doesn't distribute over any binary function (not even itself),
but logical disjunction (see there) distributes over biconditional.

truth-preserving: yes
When all inputs are true, the output is true.

falsehood-preserving: no
When all inputs are false, the output is not false.

Nonlinearity: 0 (the function is linear)

Like all connectives in first-order logic, the biconditional has rules of inference that govern its use in formal proofs.

Biconditional introduction allows you to infer that, if B follows from A, and A follows from B, then A if and only if B.

Biconditional elimination allows one to infer a conditional from a biconditional: if ( A ↔ B ) is true, then one may infer one direction of the biconditional, ( A → B ) and ( B → A ).

One unambiguous way of stating a biconditional in plain English is of the form "b if a and a if b". Another is "a if and only if b". Slightly more formally, one could say "b implies a and a implies b". The plain English "if'" may sometimes be used as a biconditional. One must weigh context heavily.

This article incorporates material from Biconditional on PlanetMath, which is licensed under the Creative Commons Attribution/Share-Alike License.