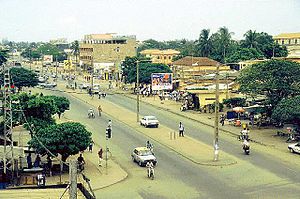 Lomé, with a population of 837,437[1] (metro population 1,570,283[1]), is the capital and largest city of Togo. Located on the Gulf of Guinea, Lomé is the country's administrative and industrial center and its chief port. The city exports coffee, cocoa, copra, and palm kernels. It also has an oil refinery.

The city was founded in the 18th century by the Ewe people.

Since 1975, investments grew by 10% in the past year and had been targeted for development. At the same time, railways, which have an important role in serving the suburbs of the city, deteriorated however.

Market gardening around the city increased, spurred by growing unemployment, rural migration and the demand for vegetables. Market gardening, first extended to the north, is carried on mainly along the beach (whose sand is very salty), and planting hedges provides protection.

The various studies of the land market of the city show that the areas are quite heterogeneous, combining opulent villas and modest housing, without social and spatial division of the city. Other problems increasingly experienced by Lomé are related to garbage collection, and the fight against unhealthy urban living conditions has become a priority of the city and its inhabitants. 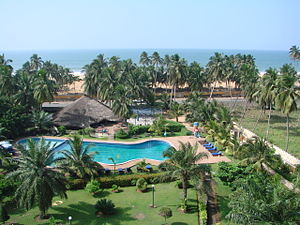 View of the Lomé beach and neighbourhood from IBIS Hotel

Lomé is surrounded by a lagoon to the north, the Atlantic Ocean to the south, the village of Bè to the east and the border of Aflao, Ghana to the West. The city has seen massive growth in recent times due to an oil refinery in the east.

Neighbourhoods in the north of the city are almost separated from the Lomé is recognized by the Togolese government as a Municipal Greater Urban Area. Cities and towns in the Greater Lomé Metropolitan Area include: Aflao (Ghana), Agbalépédogan, Akodésséwa, Anfamé, Baguida, Kanyikopé, Kélékougan, Lomé II, Totsigan, Adidogome, Kegue and Totsivi. Services of the Municipality of Lomé far beyond the boundaries of the Gulf and the town north and east of the city.

As in most equatorial climates, the city has two rainy seasons, classified as tropical wet and dry (Aw) by Köppen-Geiger system, the first starts in April and ends in July, then a second rainy season starts in early September and ends in late November.

The climate of Lomé is also greatly influenced by the ocean. The heat is stable, without excessive peaks, and the wind coming from the sea makes it quite pleasant.

The Lomé Convention is a trade and aid agreement between the European Union (EU) and 71 African, Caribbean, and Pacific (ACP) countries. It was first signed on February 28, 1975, in Lomé. The first Lomé Convention (Lomé I), which came into force in April 1976, was designed to provide a new framework of cooperation between the then European Community (EC) and developing ACP countries, in particular former British, Dutch, Belgian and French colonies. It had two main aspects. It provided for most ACP agricultural and mineral exports to enter the EC free of duty. Preferential access based on a quota system was agreed for products, such as sugar and beef, in competition with EC agriculture. Secondly, the EC committed to the ECU for 3 billion in aid and investment in the ACP countries.

The convention was renegotiated and renewed three times. Lomé II (January 1981 to February 1985) increased the aid and investment expenditure for the ECU to 5.5 billion. Lomé III came into force in March 1985 (trade provisions) and May 1986 (aid), and expired in 1990; it increased commitments to ECU by 8.5 billion. Lomé IV was signed in December 1989. Its trade provisions cover ten years, 1990 to 1999. Aid and investment commitments for the first five years amounted to 12 billion. In all, some 70 ACP states are party to Lomé IV, compared with the 46 signatories of Lomé I.

The Lomé Peace Accord between the warring parties in the civil war in Sierra Leone was signed in Lomé. With the assistance of the international community, Sierra Leone President Ahmad Tejan Kabbah and Revolutionary United Front leader Foday Sankoh signed the Peace Accord on July 7, 1999. However, the agreement did not last and the Sierra Leone Civil War continued for two more years. 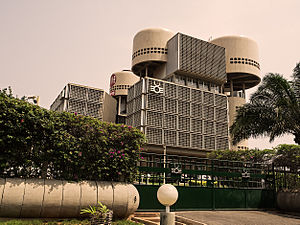 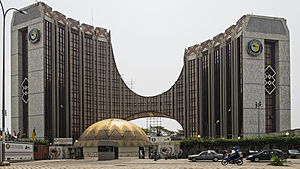 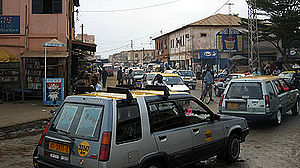 Located 200 kilometres (124 miles) from Accra and 150 kilometres (93 miles) from Cotonou, Lomé is an important port, including a free trade zone opened in 1968. It exports phosphates, coffee, cocoa, cotton and palm oil, much of the transit going to the neighbouring countries of Ghana, Mali, Niger and Burkina Faso. The port also holds an oil refinery.

The University of Lomé is now known in West Africa. The country's main airport is situated outside the city. The tallest building in Lomé, and throughout the country, is the Hotel Corinthia (36 storeys or 102 m).

The city in general has great potential, because tourism is growing in the country. However, political instability that began to surface in the passing years and continues today has seriously affected the country's tourism sector. In 2003, the country received 57,539 visitors, an increase of 1% compared to 2002. 22% of tourists came from France, 10% of Burkina Faso and 9% were from Benin.

Notable landmarks in the city include Lomé Grand Market, the Togo National Museum in the Palais de Congrés, a fetish (voodoo) market, Lomé Cathedral, beaches and the former wharf.

The city of Lomé is a typical African city in the sense that many styles, influences, and traditions are mixed. The landscape combines red earth, with grand boulevards and large squares, green gardens and colourful houses.

There are some remnants of colonial architecture from the turn of the century, such as arcades and galleries and the Cathedral of the Sacred Heart designed in the German Gothic style. There are also many modern buildings, like the headquarters of the BCEAO, the BTCI, the magnificent edifice of ECOWAS, Hotel de la Paix, the Hotel Mercure Sarakawa, Palm Beach Hotel and the famous Hotel du 2 Fevrier, rising to 102 metres. 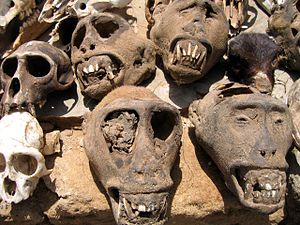 Items at the Fetish (voodoo) Market

Not far away is the Lomé Grand Market, with a large 3-storey hall. It sells everything from red peppers, green lemons, and dried fish, to combs, travel bags, and traditional medicinal remedies. On the first floor is the Nana Benz, which is noted for its clothing. Nearer the centre of the city, there is the Akodessewa market, which is much more specialized than the general market. There are fetishes, gongons, and gris-gris.

The coast is considerably less frantic than the market, with local fishermen quietly pushing their large boats out to sea. To the west of the city is a residential area that faces the sea. The area has long streets, dotted by official government buildings excluding the Palace of Justice and the various embassies and consulates. Farther north, near the Monument of Independence, is the house of the Rally of the Togolese People (RPT), a major convention center, within which lies the Togo National Museum. The museum contains collections, jewelry, musical instruments, dolls, pottery, weapons and many other objects showing the arts and traditions.

The city is served by the Lomé-Tokoin Airport which is the hub for ASKY Airlines and has intercontinental connections to Paris and Brussels. The former railway line to Blitta runs from the airport to the city. In Lomé, and in many other places in Togo, moto-taxis are a common form of transportation. Motorcycle drivers fill the streets and passengers flag them down for a ride on the back for a small charge.

Lomé is twinned with: