Lomonosov Moscow State University (MSU; Russian: Московский государственный университет имени М. В. Ломоносова, often abbreviated МГУ) is a coeducational and public research university located in Moscow, Russia. It was founded on January 25, 1755 by Mikhail Lomonosov. MSU was renamed after Lomonosov in 1940 and was then known as Lomonosov University. It also claims to house the tallest educational building in the world.[2] It is rated among the universities with the best reputation in the world. Its current rector is Viktor Sadovnichiy.

The Principal Medicine Store building on Red Square, which was home to Moscow University from 1755–1787 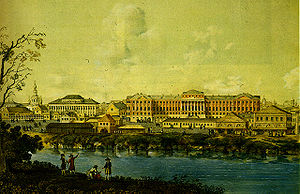 Main buildings of the university in Mokhovaya Street, 1798

The university originally occupied the Principal Medicine Store on Red Square from 1755 to 1787; Catherine the Great transferred it to a Neoclassical building on the other side of Mokhovaya Street. This main building was constructed between 1782 and 1793 in the Neo-Palladian style, designed by Matvei Kazakov, and rebuilt after the 1812 Fire of Moscow by Domenico Giliardi.

In the 18th century, the university had three departments: philosophy, medicine, and law. A preparatory college was affiliated with the university before it was abolished in 1812. In 1779 Mikhail Kheraskov founded a boarding school for noblemen (Благородный пансион), which became a gymnasium for the Russian nobility in 1830. The university press, run by Nikolay Novikov in the 1780s, published the most popular newspaper in Imperial Russia — Moskovskie Vedomosti. 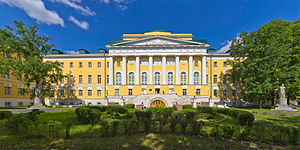 In 1804, medical education split into clinical (therapy), surgical, and obstetrics faculties. In 1884–1897 the Department of Medicine - supported by private donations, City Hall, and the national government - built an extensive, 1.6 kilometer long, state-of-the-art medical campus in Devichye Pole, between the Garden Ring and Novodevichy Convent. It was designed by ru, with university doctors like Nikolay Sklifosovskiy and Fyodor Erismann acting as consultants. The campus, and medical education in general, were separated[by whom?] from the university in 1918. As of 2015[update] Devichye Pole is operated by the independent I.M. Sechenov First Moscow State Medical University and by various other state and private institutions.

The roots of student unrest reach deep into the 1800s. In 1905 a social-democratic organization emerged at the university and called for the overthrow of the tsar and for the establishment of a republic in Russia. The Tsarist government repeatedly threatened to close the university. In 1911, in a protest over the introduction of troops onto the campus and mistreatment of certain professors, 130 scientists and professors resigned en masse, including prominent figures such as Nikolay Dimitrievich Zelinskiy, Pyotr Nikolaevich Lebedev, and Sergei Alekseevich Chaplygin. Thousands of students were expelled.

After the October Revolution of 1917 the school began admitting proletariat and peasant children. In 1919 the university abolished tuition fees, and a preparatory facility was established to help working-class children prepare for entrance exams. During the implementation of Joseph Stalin's First Five-Year Plan (1928–1932), Gulag prisoners constructed parts of the university. Stalin would later[citation needed] ironically mock, repress, and imprison the intelligensia.

After 1991 nine new faculties were established. In 1992 the university gained a unique status: it is funded directly from the state budget (bypassing the Ministry of Education), which provides a significant level of independence.

On September 6, 1997 the French electronic musician Jean Michel Jarre, whom the mayor of Moscow had specially invited to perform, used the entire front of the university as the backdrop for a concert. The frontage served as a giant projection screen, while fireworks, lasers, and searchlights were all launched from various points around the building. The stage stood directly in front of the building, and the concert, titled "The Road To The 21st Century" in Russia (but renamed "Oxygen In Moscow" for worldwide video/DVD release) attracted a world-record crowd of 3.5 million people. 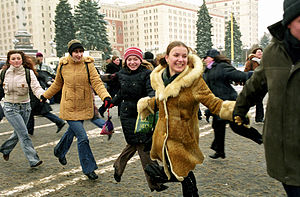 On March 19, 2008, Russia's most powerful supercomputer to date, the SKIF MSU (Russian: СКИФ МГУ; skif in Russian means "Scythian") was launched at the university. Its peak performance of 60 TFLOPS (LINPACK - 47.170 TFLOPS) make it the fastest supercomputer in the CIS.[3][4][5] 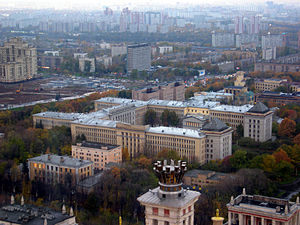 Building of the Faculties of Biology and of Soil Science

Since 1953, most of the faculties have been situated on Sparrow Hills, in the southwest of Moscow, 5 km from the city center. The main building was designed by architect Lev Vladimirovich Rudnev. In the post-war era, Joseph Stalin ordered seven huge tiered neoclassic towers to be built around the city. It was built using Gulagor labour, as were many of Stalin's Great Construction Projects in Russia.[6] Located on Moscow's outskirts at the time of its construction, the location of the main building is now about half-way between the center of Moscow at the Kremlin and the city's current limits. The Journalism Department now occupies the university's original location in downtown Moscow across from the Manezh, steps from the Kremlin and other government buildings. Indeed, frequent student unrest, including street protests, well pre-dating 1917 may be one reason why Stalin's planners sited the university across the Moscow River, so far away.[citation needed]

The MSU main building was the tallest building in the world outside of New York City at the time of its construction, and remained the tallest building in Europe until 1990. The central tower is 240 m tall, 36 stories high, and flanked by four huge wings of student and faculty accommodations. It is said to contain a total of 33 kilometers of corridors and 5,000 rooms. 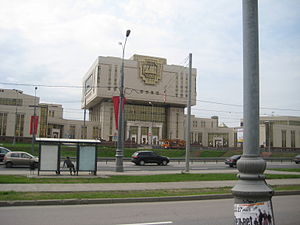 Facilities available inside the building include a concert hall, a theater, a museum, administrative services, a library, a swimming pool, a police station, a post office, a laundry, a hairdresser's salon, several canteens, bank offices and ATMs, shops, cafeterias, a bomb shelter, etc. Along with the university administration, the Museum of Earth Sciences and four of the main faculties – Faculty of Mechanics and Mathematics, the Faculty of Geology, the Faculty of Geography, and the Faculty of Fine and Performing Arts – now reside in the Main building. The star on the top of the tower is large enough to include a small room and a viewing platform; it weighs 12 tons. The building's facades are ornamented with giant clocks, barometers, thermometers, statues, carved wheat sheaves, and Soviet crests. It stands before a terrace featuring statues of male and female students gazing optimistically and confidently into the future.

While the Sparrow Hills were on the outskirts of the city at the time of the construction of the main building, they are now about halfway from the Kremlin to the city limits. Several other buildings and sports facilities were later added to the campus, including the only baseball stadium in Russia. Currently, a new building is under construction for the social sciences faculties, and another new one of vast size has just been built for the library, which is the second-largest in Russia by volume (number of books). The university also has several dormitory buildings in the Southwest of Moscow, outside the campus.

The historical building on Mokhovaya Street now mainly houses the Faculty of Journalism, the Faculty of Psychology, and The Institute of Asian and African Studies. The university includes a number of faculty buildings located near Manege Square in the center of Moscow and a number of campuses abroad in Ukraine, Kazakhstan, Tajikistan and Uzbekistan.

The university's main library is one of the largest in Russia. Current estimates suggest that it contains approximately 9,000,000 volumes. The library serves in the area of 55,000 readers per year, using approximately 5,500,000 books.

The university offers classes on its main campus not only in Moscow, but also on campuses in Armenia, Ukraine, Kazakhstan, Azerbaijan and Uzbekistan. These include the Puschino MSU campus, Podmoskovny MSU campus, Chernomorsky MSU campus and Kazakhstan MSU campus. The Ulyanovsk branch of MSU was reorganized into Ulyanovsk State University in 1996.

As of September 2009, the university has 39 faculties and 15 research centres. A number of small faculties have been opened recently, such as Faculty of Physics and Chemistry and Higher School of Television. Evening classes are conducted by the Faculties of Economics, History, Journalism, Philology, Psychology and Sociology while the Faculty of Journalism offers a correspondence degree program. Here is the full list of faculties, according to the official web-site:[7]

File:Msu-stalinweddingcake-seabhcan.JPG
Statue of a student in front of the Main Building

Currently the university employs more than 4,000 academics and 15,000 support staff. Approximately 5,000 scholars work at the university's research institutes and related facilities. More than 40,000 undergraduates and 7,000 advanced degree candidates are enrolled. More than 5,000 specialists participate in refresher courses for career enhancement. Annually, the university hosts approximately 2,000 students, graduate students, and researchers from around the world.

A few more narrowly specialized Moscow colleges, including the Moscow Institute of Physics and Technology and the Moscow State Institute of International Relations were split off from MSU at one time or another and have since established strong reputations of their own, arguably even surpassing their parent in terms of prestige and quality of education.

The university has well-established contacts with the most distinguished universities in the world, exchanging students and lecturers with the leading international institutions of higher education. It houses the UNESCO International Demography Courses, the UNESCO Hydrology Courses, the International Biotechnology Center, the International LASER Center, courses or seminars on Russian as a foreign language. In 1991 the French University College, the Russian-American University and the Institute of German Science and Culture were opened. The university has awarded honorary degrees to more than 60 scientists, statesmen and politicians from abroad. Many prominent university scholars and scientists in return hold honorary degrees from foreign academies and universities.

Moscow State University is one of Russia's most prestigious institutions of higher learning, and has demanding entry requirements for prospective students. Nonetheless, it performs inconsistently in international rankings. While it was placed 77th overall[8] by the Academic Ranking of World Universities and 112th[9] by QS World University Rankings, it was not included among the top 200 universities[10] by recent Times Higher World University Rankings and came in at 296th (based on the full THE World University Rankings in their iPhone application). On a highly cited and consistent ranking, Moscow State University ranked 43rd in 2008, 44th in 2009–2011, and 45th among 300 Best World Universities in 2012 compiled by Human Resources & Labor Review (HRLR) on Measurements of World's Top 300 Universities Graduates' Performance.[11] Despite its large number of faculties, Moscow State University seems to be strong mostly in natural sciences and mathematics (currently placed between 38th[9] and 75th[12] in the world) but considerably weaker in other disciplines. Despite the fact that it is still the highest ranked Russian university according to the three international rankings mentioned above (with the nearest Russian competitor being Saint Petersburg State University that scored 300–400th), the university was consistently placed outside top 5 nationally in 2010–2011 by Forbes[13] and Ria Novosti / HSE.,[14] with both ratings based on data set collected by HSE from Russian Unified State Exam scores averaged per all students and faculties of university.

11 Nobel laureates and 7 Fields Medal winners are affiliated with the university. It is the alma mater of many famous writers such as Anton Chekhov and Ivan Turgenev, politicians such as Mikhail Gorbachev and Mikhail Suslov, as well as renowned mathematicians and physicists such as Boris Demidovich, Vladimir Arnold, and Andrey Kolmogorov.