The London Mathematical Society (LMS) is one of the United Kingdom's learned societies for mathematics (the others being the Royal Statistical Society (RSS) and the Institute of Mathematics and its Applications (IMA)). 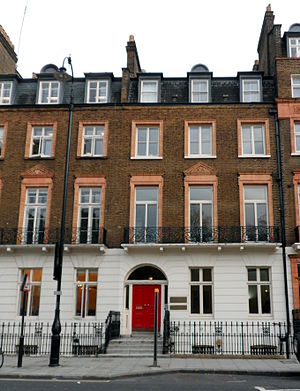 The Society was established on 16 January 1865, the first president being Augustus De Morgan. The earliest meetings were held in University College, but the Society soon moved into Burlington House, Piccadilly. The initial activities of the Society included talks and publication of a journal.

The LMS was used as a model for the establishment of the American Mathematical Society in 1888.

The Society was granted a royal charter in 1965, a century after its foundation. In 1998 the Society moved from rooms in Burlington House into De Morgan House (named after the society's first president), at 57–58 Russell Square, Bloomsbury, to accommodate an expansion of its staff. The Society is also a member of the UK Science Council.

Proposal for unification with the IMA

On 4 July 2008, the Joint Planning Group for the LMS and IMA proposed a merger of two societies to form a single, unified society. The proposal was the result of eight years of consultations and the councils of both societies commended the report to their members.[1] Those in favour of the merger argued a single society would give mathematics in the UK a coherent voice when dealing with Research Councils.[2] While accepted by the IMA membership, the proposal was rejected by the LMS membership on 29 May 2009 by 591 to 458 (56% to 44%).[3]

The Society publishes books and periodicals; organizes mathematical conferences; provides funding to promote mathematics research and education; and awards a number of prizes and fellowships for excellence in mathematical research.

The named prizes are:

In addition, the Society jointly with the Institute of Mathematics and its Applications awards the David Crighton Medal every three years.