Long Range Aviation (Russian: Дальняя Авиация, tr. Aviatsiya dal'nego deystviya, abbr. to AДД, or ADD) is the branch of the Soviet Air Forces and Russian Air Force tasked with long-range bombardment of strategic targets with nuclear weapons. During the Cold War, it was the counterpart to the Strategic Air Command of the United States Air Force.

The first three Air Armies, designated Air Armies of Special Purpose were created between 1936 and 1938. 2nd Army was created on 15 March 1937 in the Far East. Somewhat later, the 3rd Air Army was created in the North Caucasus Military District. On 5 November 1940 these were reformed as the Long Range Bombardment Aviation of the Stavka of the Red Army (until February 1942) due to poor combat performance during the Winter War with Finland.[1]

The force was created on 5 March 1942 to meet strategic objectives: bomb strikes on administrative, political and military targets deep in the enemy's rear, the enemy of transportation violations, destruction warehouses in close behind the bombing of the enemy on the line of Front and for strategic operations. ADD was placed under the command of Alexander Golovanov. In addition, ADD (including its member Civil Air Fleet of the USSR) was widely used to support guerrillas in the occupied territory of the USSR and Yugoslavia.

Throughout its existence, the LRA was part of the Reserve of the Supreme High Command (RVGK). It only received orders from the Supreme Commander, Iosef Stalin. The basis of the combat fleet were long-range Ilyushin Il-4 bombers, though Petlyakov Pe-8s and other aircraft were later used.

During the Battle of Stalingrad, the LRA, having taken crippling losses over the past 18 months, was restricted to flying at night. The Soviets flew 11,317 night sorties over Stalingrad and the Don-bend sector between 17 July and 19 November 1942. These raids caused little damage and were of nuisance value only.[2]:82[3]

Five long-range bomber corps were established which had in service at various times nearly 3000 aircraft, of which war - about 1800.[4] Pilots of heavy aircraft struck the cities of Danzig, Königsberg, Kraków, Berlin, Helsinki, Tallinn and others. The LRA took an active part in the operations in the Baltic States. On March 9, 1944 about 2000 and 1500 explosive incendiary bombs were dropped on residential areas of Tallinn. Results of two Soviet air raids: 40% of the buildings in the city destroyed, 463 dead, 649 injured and about 20,000 homeless citizens. Harju Street was especially hard hit, along with the theater "Estonia", where a concert had just started. From 6 to 8 March 1944 the historical part of Narva was virtually wiped out; in the same month Tartu, Tapa and Jõhvi were also bombed.[5] In the period July–December 1944, the LRA made more than 7,200 sorties, dropping about 62,000 bombs with a total weight of 7,600 tons.[6]

In December 1944 the LRA was transferred to the Red Army Air Force and converted into the 18th Air Army(Vozdushnaya Armiya VA).[7] 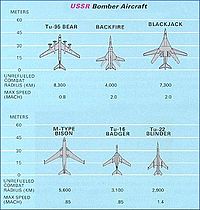 As the 1940s closed and the Cold War dawned, the Soviet Union scrambled to develop an instrument of deterrence against the United States. The only substantial aircraft that it was equipped with was the Tupolev Tu-4 (Bull), an exact copy of the B-29 Superfortress. This was fielded in 1949, and brought the first threat of attack to the United States, as missile technology at this time was still a decade away. However, the Tu-4 was incapable of returning to the Soviet Union, and the Soviet aviation engineering establishment worked to develop an aircraft capable of round-trip operation.

The outcome of this competition was the highly successful Tupolev Tu-95, which entered service in the 1955-1956 period, and remained the backbone of Soviet air power against NATO for many decades. It continues in service with the Russian Federation.[12] Myasischev's contribution was the Myasishchev M-4, but this aircraft fell below expectations. It surprisingly went on to serve an unexpected but vital role as the 3M aerial refueling tanker, which extended the reach of the strategic air fleet. Other aircraft in service with the DA during this period included the Tupolev Tu-16 (Badger) and the Tupolev Tu-22 (Blinder).

In 1957, the 65th Air Army was renamed the 5th Air Army and was relocated to Blagoveshchensk. In 1960, Long Range Aviation was reorganised into the 2nd, 6th, and 8th Separate Heavy Bomber Air Corps (OTBAK - Otdel'niy tyazhely bombandirovochniy aviatsionniy korpus) instead of Air Armies due to increase in aircraft ordnance capacity, and the option of nuclear weapons ordnance.[11][13] These three corps were formed from portions of the 43rd, 50th, and 5th Air Armies DA. At the same time, the 43rd and 50th Air Armies were transferred to the Strategic Rocket Forces, and became the 43rd Rocket Army and the 50th Rocket Army.

A classified CIA report indicated that, at least during the early 1970s, there was no evidence of a quick-reaction posture; in other words, no airborne alert force and no quick-reaction crews on the ground. This stood in stark contrast to the United States Air Force, which was always at a high state of readiness. Furthermore, the 195 bombers belonging to Long Range Aviation were concentrated at only five primary airfields and spent most of their time there.[citation needed]

Until 1980, the DA VS existed as a separate service. In January 1980, the DA was disbanded and the heavy bomber units divided between three air armies, the 37th Air Army of the Supreme High Command (Strategic Purpose) (37 VA VGK (SN)) with its headquarters in Moscow, the 46 VA VGK (SN) at Smolensk, and the 30th Air Army (30 VA VGK (SN)) at Irkutsk (nb- this Cold War information is seemingly incorrect, and 30th Air Army headquarters was actually located at Blagoveshchensk). During the 1980s, DA introduced the Tupolev Tu-160 (Blackjack) high-performance bomber, similar to and slightly larger than the American B-1 Lancer. The three long-range air armies also flew the Tu-22M.

In 1988, the three air armies were again reunified to form the Long Range Aviation Command.

In the event of a nuclear war with the United States, the Soviet Union would likely have committed its entire heavy bomber force to attacks against US targets. Medium-sized bombers would have been used in a peripheral role.

However elements of all of the Soviet Union's strategic forces would have been available to participate in Warsaw Pact operations. The CIA in 1975 estimated that 530 intermediate-range bombers west of the Urals, possibly augmented by Soviet Navy aircraft, were intended for European strikes in the NATO rear area that required large conventional or nuclear payloads.

Long Range Aviation's aircraft was based at about a dozen key bases around the Soviet Union: Ryazan Dyagilevo near Moscow; Pryluky and Uzyn in Ukraine; Engels-2 near Saratov; Mozdok, Republic of North Ossetia-Alania near Chechnya; Dolon near Semipalitinsk; and Belaya, Ukrainka, and Vozdvizhenka in the Far East.

Though basing forces in the Arctic would have posed more of a threat to North America, the hostile climate, poor logistical network, and weak defense network precluded such a plan. Therefore, the Soviet Union created a network of standby Arctic staging bases ('Bounce airdromes'; Russian: Аэродром подскока) under the control of OGA (Arctic Control Group), which would have been activated in wartime.[14] These bases were airfields used for a short stop ("bounce") by airplanes for refueling and servicing for the purpose of extending the range of the flight, including long-range military (their Staging base).

They primarily included Olenegorsk, Novaya Zemlya Rogachevo Airport, and Vorkuta Sovetskiy in the northwest; and Tiksi Airport, Anadyr Ugolny Airport, and Mys Shmidta in the northeast. High-Arctic bases such as Nagurskoye and Greem-Bell may have been available to smaller aircraft, and the staging airfields Sredniy Ostrov, Dresba, Chekurovka, and Tiksi North were probably never completed. Though the Tu-95 could operate without the use of staging bases, nearly all other aircraft would have required the facilities in order to reach the United States .

After the fall of the Soviet Union 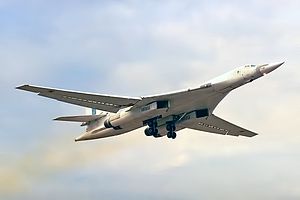 In 1992 Ukraine also received much of the Soviet Black Sea Fleet, including the 2nd Guards Maritime Missile Aviation Division (Gvardeyskoye, Crimean Oblast), with three regiments of maritime attack Tu-22M2s and an independent Maritime Reconnaissance Aviation Regiment (Saki-Novofedorovka, Crimean Oblast) of Tu-22Ps.[19] The 1995/96 edition of the Military Balance continued to list the remnant of these forces under now-Ukrainian Naval Aviation. In 1994 Tu-22M2s, Tu-16Ks and a large part of the Tupolev Tu-22Ps were shipped to storage bases and then disposed of.[19]

The reasons for the elimination of Ukrainian long-range bombers included:[20]

Funding for the elimination of strategic aviation of Ukraine was allocated by the U.S. government as part of an agreement "to provide assistance to Ukraine in the elimination of strategic nuclear weapons and to prevent the proliferation of weapons of mass destruction", signed on November 25, 1993 between Ukraine and the United States.[17] In 2000 in the agreement was extended to 31 December 2006.[21]

With the dissolution of the Soviet Union, Long Range Aviation in Russia entered a period of decline, along with the other former components of the Soviet Armed Forces. This culminated when the command was formally disbanded in 1998 as part of the amalgamation of the Russian Air Defence Force and the Air Forces. It was replaced by the 37th Air Army of the Supreme High Command.

In 2009 the 37th Air Army of the Supreme Command was disbanded as part of a large scale reorganisation of the Air Force and has been reformed into the Long Range Aviation Command.