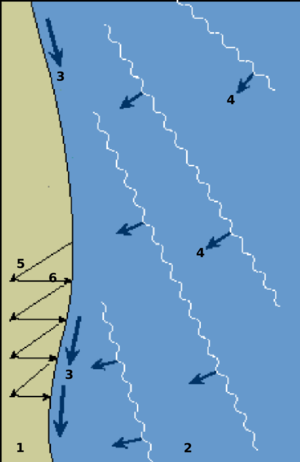 Longshore drift is a geographical process that consists of the transportation of sediments (clay, silt, sand and shingle) along a coast at an angle to the shoreline, which is dependent on prevailing wind direction, swash and backwash.[1] This process occurs in the littoral zone, and in or close to the surf zone. The process is also known as littoral drift, longshore current or longshore transport.[1]

Longshore drift is influenced by numerous aspects of the coastal system, with processes that occur within the surf zone largely influencing the deposition and erosion of sediments. Longshore currents can generate oblique breaking waves which result in longshore transport.[2]

Longshore drift can generally be defined in terms of the systems within the surf zone as seen in figure 1. This figure shows that sediment transport along the shore and surf zone is influenced by the swash (occurs in the direction of prevailing wind), which moves the pebble up the beach at the angle of the waves, and moves the pebble back down the beach due to the influence of gravity.

Longshore drift affects numerous sediment sizes as it works in slightly different ways depending on the sediment (e.g. the difference in long shore drift of sediments from a sandy beach to that of sediments from a shingle beach). Sand is largely affected by the oscillatory force of breaking waves, the motion of sediment due to the impact of breaking waves and bed shear from long shore current.[2] Because shingle beaches are much steeper than sandy ones, plunging breakers are more likely to form, causing the majority of long shore transport to occur in the swash zone, due to a lack of an extended surf zone.[2]

There are numerous calculations that take into consideration the factors that produce longshore drift. These formulations are:

These formulas all provide a different view into the processes that generate longshore drift. The most common factors taken into consideration in these formulas are:

Longshore drift plays a large role in the evolution of a shoreline, as if there is a slight change of sediment supply, wind direction, or any other coastal influence longshore drift can change dramatically, impacting on the formation and evolution of a beach system or profile. These changes do not occur due to one factor within the coastal system, in fact there are numerous alterations that can occur within the coastal system that may affect the distribution and impact of longshore drift. Some of these are:

This sediment then enters the coastal system and is transported by longshore drift. A good example of the sediment budget and longshore drift working together in the coastal system is inlet ebb-tidal shoals, which store sand that has been transported by long shore transport.[4] As well as storing sand these systems may also transfer or by pass sand into other beach systems, therefore inlet ebb-tidal [shoal] systems provide a good sources and sinks for the sediment budget.[4]

Sediment (deposition (geology) throughout a shoreline profile conforms to the null point hypothesis; where gravitational and hydraulic forces determine the settling velocity of grains in a seaward fining sediment distribution. Long shore occurs in a 90 to 80 degree backwash so it would be presented as a right angle with the wave line. 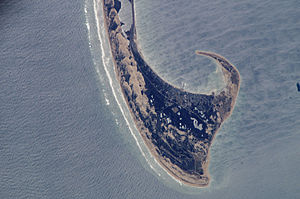 Figure 2. Provincetown Spit, at the northern end of Cape Cod, was formed by longshore drift after the end of the last Ice age.

Spits are landforms that have two important features, with the first feature being the region at the up-drift end or proximal end (Hart et al., 2008). The proximal end is constantly attached to land (unless breached) and may form a slight “barrier” between the sea and an estuary or lagoon.[7] The second important spit feature is the down-drift end or distal end, which is detached from land and in some cases, may take a complex hook-shape or curve, due to the influence of varying wave directions.[7]

As an example, the New Brighton spit in Canterbury, New Zealand, was created by longshore drift of sediment from the Waimakariri River to the north.[5] This spit system is currently in equilibrium but undergoes phases of deposition and erosion.

Barrier systems are attached to the land at both the proximal and distal end and are generally widest at the down-drift end.[8] These barrier systems may enclose an estuary or lagoon system, like that of Lake Ellesmere enclosed by the Kaitorete Spit or hapua which form at river-coast interface such as at the mouth of the Rakaia River.

The Kaitorete Spit in Canterbury, New Zealand, is a barrier/spit system (which generally falls under the definition barrier, as both ends of the landform are attached to land, but has been named a spit) that has existed below Banks Peninsula for the last 8000 years.[9] This system has undergone numerous changes and fluctuations due to avulsion of the Waimakariri River (which now flows to the north or Banks Peninsula), erosion and phases of open marine conditions.[9] The system underwent further changes c.500 year BP, when longshore drift from the eastern end of the “spit” system created the barrier, which has been retained due to ongoing longshore transport.[9]

The majority of tidal inlets on longshore drift shores accumulate sediment in flood and ebb shoals.[1] Ebb-deltas may become stunted on highly exposed shores and in smaller spaces, whereas flood deltas are likely to increase in size when space is available in a bay or lagoon system.[1] Tidal inlets can act as sinks and sources for large amounts of material, which therefore impacts on adjacent parts of the coastline.[10]

The structuring of tidal inlets is also important for longshore drift as if an inlet is unstructured sediment may by pass the inlet and form bars at the down-drift part of the coast.[10] Although this may also depend on the inlet size, delta morphology, sediment rate and by passing mechanism.[1] Channel location variance and amount may also influence the impact of long shore drift on a tidal inlet as well.

For example, the Arcachon lagoon is a tidal inlet system in South west France, which provides large sources and sinks for longshore drift sediments. The impact of longshore drift sediments on this inlet system is highly influenced by the variation in the number of lagoon entrances and the location of these entrances.[10] Any change in these factors can cause severe down-drift erosion or down-drift accretion of large swash bars.[10]

This section consists of long shore drift features that occur unnaturally and in some cases (e.g. groynes, detached breakwaters) have be constructed to enhance the effects of longshore drift on the coastline, but in other cases have a negative impact on long shore drift (ports and harbours). 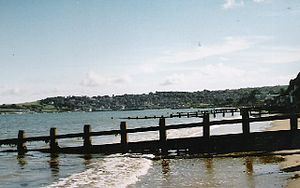 Groynes are shore protection structures, placed at equal intervals along the coastline in order to stop coastal erosion and generally cross the intertidal zone.[2] Due to this, groyne structures are usually used on shores with low net and high annual longshore drift in order to retain the sediments lost in storm surges and further down the coast.[2]

There are numerous variations to groyne designs with the three most common designs consisting of:

Artificial headlands are also shore protection structures, which are created in order to provide a certain amount of protection to beaches or bays.[2] Although the creation of headlands involves accretion of sediments on the up-drift side of the headland and moderate erosion of the down-drift end of the headland, this is undertaken in order to design a stabilised system that allows material to accumulate in beaches further along the shore.[2]

Artificial headlands can occur due to natural accumulation or also through artificial nourishment. 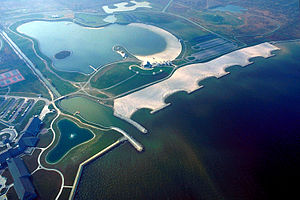 Figure 4. Picture showing the use of artificial headlands and detached breakwaters in a coastal system

Detached breakwaters are generally used in the same way as groynes, to build up the volume of material between the coast and the breakwater structure in order to accommodate storm surges.[2]

As an example, the creation of a port in Timaru, New Zealand in the late 1800s led to a significant change in the longshore drift along the South Canterbury coastline.[5] Instead of longshore drift transporting sediment north up the coast towards the Waimataitai lagoon, the creation of the port blocked the drift of these (coarse) sediments and instead caused them to accrete to the south of the port at South beach in Timaru.[5] The accretion of this sediment to the south, therefore meant a lack of sediment being deposited on the coast near the Waimataitai lagoon (to the north of the port), which led to the loss of the barrier enclosing the lagoon in the 1930s and then shortly after, the loss of the lagoon itself.[5] As with the Waimataitai lagoon the Washdyke Lagoon, which currently lies to the north of the Timaru port is undergoing erosion and may eventually breach causing loss of another lagoon environment.