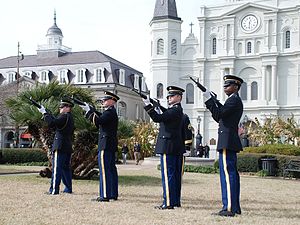 The guard is directed by an adjutant general appointed by the Governor of Louisiana. Unless federalized by order of the President of the United States, which places members on active US military duty status, the Louisiana National Guard is under the jurisdiction of the Louisiana Military Department.

The National Guard has both active and inactive (reserve) members as well as full and part-time members. Part-time Guard members are referred to as 'weekend Warriors'[2] both by the military and civilians.

When National Guard troops are called to federal service, the President serves as Commander-in-Chief. The federal mission assigned to the National Guard is: "To provide properly trained and equipped units for prompt mobilization for war, National emergency or as otherwise needed."

From 1968 to 1972 in the second term of Governor John J. McKeithen, the adjutant general was David Wade, then a retired Lieutenant General in the United States Air Force, who had commanded Barksdale Air Force Base in Bossier City from 1963 to 1966.[4]

Ronald A. Waller was the first African American LT. Colonel of the Louisiana National Guard.

The Louisiana Army National Guard has 9,500 members stationed at 67 armories in 63 communities throughout Louisiana, reporting to the Joint Force Headquarters.[8]

The 159th Fighter Wing is the main component of the Louisiana Air National Guard. Stationed at the Naval Air Station Joint Reserve Base New Orleans in Belle Chasse, the wing is nicknamed the "Bayou Militia". If Federalized the wing becomes part of the United States Air Force Air Combat Command. The wing was founded in 1941, on the south shore of Lake Pontchartrain as one of 29 original National Guard wings in the United States, but was moved to the current location in 1957.

In addition, the Louisiana State Guard (LSG) is an all-volunteer militia force under the Louisiana Military Department that provides reserve personnel to both the Louisiana Army National Guard and the Louisiana Air National Guard. It is under state jurisdiction and its members are employed only within the State of Louisiana. It is not subject to be called, ordered or assigned as any element of the federal armed forces. Its mission is to provide units organized, equipped and trained in the protection of life or property and the preservation of peace, order and public safety under competent orders of State authorities.[12]

Louisiana has two countries in the SPP (State Partnership Program). Belize joined the SPP with Louisiana National Guard in 1996 and Haiti in 2011. Both of these nations fall under the area of operations of SOUTHCOM.