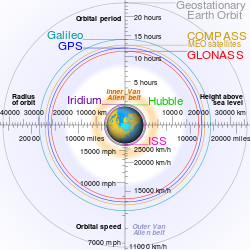 Comparison of geostationary, GPS, GLONASS, Galileo, Compass (MEO), International Space Station, Hubble Space Telescope and Iridium constellation orbits, with the Van Allen radiation belts and the Earth to scale.[lower-alpha 1] The Moon's orbit is around 9 times larger than geostationary orbit.[lower-alpha 2] (In the SVG file, hover over an orbit or its label to highlight it; click to load its article.)

With the exception of the manned lunar flights of the Apollo program, all human spaceflights have taken place in LEO (or were suborbital). The altitude record for a human spaceflight in LEO was Gemini 11 with an apogee of 1,374.1 kilometers (853.8 mi). All manned space stations to date, as well as the majority of satellites, have been in LEO.

Objects in LEO encounter atmospheric drag in the form of gases in the thermosphere (approximately 80–500 km up) or exosphere (approximately 500 km and up), depending on orbit height. Objects in LEO orbit Earth between the atmosphere and below the inner Van Allen radiation belt. The altitude is usually not less than 300 km for satellites, as that would be impractical due to atmospheric drag.

The orbital velocity needed to maintain a stable low Earth orbit is about 7.8 km/s, but reduces with increased orbital altitude. Calculated for circular orbit of 200 km it is 7.79 km/s and for 1500 km it is 7.12 km/s.[3] The delta-v needed to achieve low Earth orbit starts around 9.4 km/s. Atmospheric and gravity drag associated with launch typically adds 1.3–1.8 km/s to the launch vehicle delta-v required to reach normal LEO orbital velocity of around 7.8 km/s (28,080 km/h).[4]

Equatorial low Earth orbits (ELEO) are a subset of LEO. These orbits, with low inclination to the Equator, allow rapid revisit times and have the lowest delta-v requirement (i.e., fuel spend) of any orbit. Orbits with a high inclination angle to the equator are usually called polar orbits.

Roughly half an orbit of the ISS.

Although the Earth's pull due to gravity in LEO is not much less than on the surface of the Earth, people and objects in orbit experience weightlessness because they are in free fall.

A low Earth orbit is simplest and cheapest for satellite placement. It provides high bandwidth and low communication time lag (latency), but satellites in LEO will not be visible from any given point on the Earth at all times.[5]

The LEO environment is becoming congested with space debris due to the frequency of object launches. This has caused growing concern in recent years, since collisions at orbital velocities can easily be dangerous, and even deadly. Collisions can produce even more space debris in the process, creating a domino effect, something known as Kessler Syndrome. The Joint Space Operations Center, part of United States Strategic Command (formerly the United States Space Command), currently tracks more than 8,500 objects larger than 10 cm in LEO.[8] However, a limited Arecibo Observatory study suggested there could be approximately one million objects larger than 2 millimeters,[9] which are too small to be visible from Earth-based observatories.[10]