Situated east of Upper Austria, Lower Austria derives its name from its downriver location on the Danube River, which flows from west to east. Lower Austria has an international border, 414 km long, with the Czech Republic (mainly South Moravia) and Slovakia. The state has the second longest external border of all Austrian states. It also borders the other Austrian states of Upper Austria, Styria and Burgenland as well as surrounding Vienna.

These regions have different geographical structures. Whilst the Mostviertel is dominated by the foothills of the Limestone Alps with mountains up to 2,000 m (AA) high, most of the Waldviertel is a granite plateau. The hilly Weinviertel lies to the northeast, descends to the plains of Marchfeld in the east of the state, and is separated by the Danube from the Vienna Basin to the south, which in turn is separated from the Vienna Woods by a line of thermal springs (the Thermenlinie) running north to south.

The state border with Styria runs over both passes. 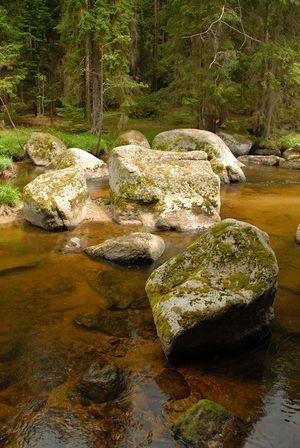 Almost all of Lower Austria is drained by the Danube. The only river that flows into the North Sea (via the Moldau and the Elbe) is the Lainsitz in northern Waldviertel. 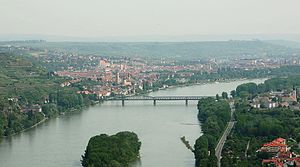 View of Krems at the end of Wachau valley

Lower Austria is divided into four regions: Waldviertel, Mostviertel, Industrieviertel, and Weinviertel. The Wachau valley, situated between Melk and Krems in the Mostviertel region, is famous for its landscape, culture, and wine.

Administratively, the state is divided into 21 districts (Bezirke), and four independent towns (Statutarstädte). In total, there are 573 municipalities within Lower Austria. 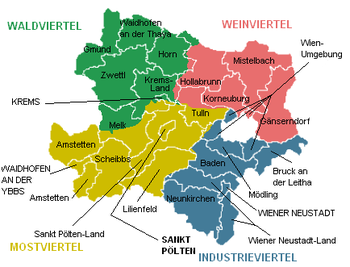 Map of Lower Austria showing districts and the four quarters (Waldviertel in green, Weinviertel in red, Mostviertel in yellow and Industrieviertel in blue)