Lucian King Truscott, Jr. (January 9, 1895 – September 12, 1965) was a senior United States Army officer, who successively commanded the 3rd Infantry Division, VI Corps, U.S. Fifteenth Army and U.S. Fifth Army during World War II. He was, therefore, the only American officer to command a division, a corps, and a field army on active service during the war.

Truscott was born in Chatfield, Texas, to an English father and Irish mother, and joined the Army in 1917. After officer training, he was commissioned a second lieutenant of cavalry and served in various cavalry and staff assignments between World War I and World War II. He married Sarah "Chick" Nicholas Randolph, a descendent of Thomas Jefferson, on 27 March 1919.

In July 1942, Truscott was appointed to the staff of IX Corps Area, at Fort Lewis, Washington.[1]

In 1942, then-Colonel Truscott was instrumental in developing an American commando unit patterned after the British Commando units. The American unit was activated by Truscott (newly promoted to Brigadier General) on June 19, 1942 as the 1st Ranger Battalion, and placed under the command of William Orlando Darby.

In May, 1942, Truscott was assigned to the Allied Combined Staff under Lord Louis Mountbatten and in August, he was the primary U.S. Observer on the Dieppe Raid. The Dieppe Raid was primarily a Canadian operation with 2 British Commandos attached along with a 50-man detachment from the 1st Ranger Battalion. The Rangers were assigned to No. 3 Commando, No. 4 Commando, and 6 Rangers were spread out among the Canadian Regiments. This was considered the first action by US troops against German forces in World War II.[1]

On November 8, 1942, as a major general, he led the 9,000 men of the 60th Infantry Regiment and 66th Armored Regiment in the landings at Mehdia and Port Lyautey in Morocco, part of Operation Torch under General George S. Patton.[2]

Truscott took command of the 3rd Infantry Division in April 1943, and oversaw preparations for the Allied invasion of Sicily, Operation Husky. He was known as a very tough trainer, bringing the 3rd Infantry Division up to a very high standard. He led the division in the assault on Sicily in July 1943. Here his training paid off when the division covered great distances in the mountainous terrain at high speed. The famous 'Truscott Trot' was a marching pace of five miles per hour over the first mile, thereafter four miles per hour, much faster than the usual standard of 2.5 miles per hour. The 3rd Infantry Division was considered by many[who?] the best-trained, best-led division in the Seventh Army. In mid-September 1943, nine days after the initial Allied landings, he led the division ashore at Salerno on the Italian mainland, where it fought its way up the peninsula.

In January 1944, the division assaulted Anzio as part of the U.S. VI Corps, which also included the British 1st Infantry Division. Allied forces soon became mired on the beachhead, and Truscott was given command of VI Corps, replacing the initial commander, Major General John P. Lucas, who had proved to be indecisive during the battle. Truscott was succeeded in command of 3rd Infantry Division by Major General John "Iron Mike" O'Daniel.

Following Anzio, Truscott continued to command VI Corps through the fighting up the Italian boot. However, his command was then withdrawn from the line to prepare for Operation Dragoon, the amphibious assault on southern France. On 15 August 1944, the VI Corps landed in southern France and initially faced relatively little opposition.

The rapid retreat of the German Nineteenth Army resulted in swift gains for the Allied forces and the Dragoon force met up with southern thrusts from Operation Overlord in mid-September, near Dijon.

A planned benefit of Dragoon was the usefulness of the port of Marseille. The rapid Allied advance after Operation Cobra and Dragoon slowed almost to a halt in September 1944 due to a critical lack of supplies, as thousands of tons of supplies were shunted to northwest France to compensate for the inadequacies of port facilities and land transport in northern Europe. Marseille and the southern French railways were brought back into service despite heavy damage to the port of Marseille and its railroad trunk lines. They became a significant supply route for the Allied advance into Germany, providing about a third of the Allied needs.

On 2 September 1944, Truscott was promoted to lieutenant general (3-stars) and in October he was appointed commander of the newly formed Fifteenth Army, which was largely an administrative and training command.[3] 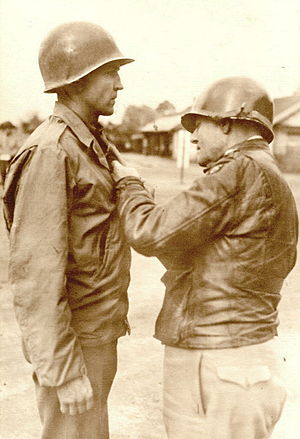 Truscott's next command came in December 1944. He was promoted to command of the U.S. Fifth Army[4] in Italy when its commander Lieutenant General Mark Clark was made commander of 15th Army Group. Truscott led the Army through the hard winter of 1944–1945, where many of its formations were in exposed positions in the mountains of Italy. He then led the army through the Allied Spring 1945 offensive in Italy culminating in the final destruction of the German forces in Italy.

Truscott had a very soothing voice, said to be the result of an accidental ingestion of acid in childhood. He was superstitious about his clothing, and usually wore a leather jacket, 'pink' (light khaki) pants and lucky boots in combat. He also wore a white scarf as a trademark, first during the Sicilian campaign.[5]

Truscott once said to his son, "Let me tell you something, and don't ever forget it. You play games to win, not lose. And you fight wars to win. That's spelled W-I-N ! And every good player in a game and every good commander in a war…has to have some son of a bitch in him. If he doesn't, he isn't a good player or commander....It's as simple as that. No son of a bitch, no commander."[5]

Truscott was respected by those who served under him. A medical officer in the Seventh Army related stories he'd heard from the men who served under Truscott earlier. Unlike some commanders, Truscott was not noted for self-aggrandisement,[6][note 1] nor did he suffer such from his superiors.[note 2] Others noted he was humbled by the sacrifices those under him had made. Bill Mauldin described the time Truscott gave the address on Memorial Day, May 31, 1945, in the military cemetery at Nettuno, outside Anzio: "He turned his back on the assembled windbags and sparklers and talked to the crosses in the cemetery, quietly, apologizing, and then walked away without looking around."[7][note 3]

Truscott took over command of the U.S. Third Army from General George S. Patton on 8 October 1945, and led it until April 1946. This command included the Eastern Military District of the U.S. occupation zone of Germany, which consisted primarily of the state of Bavaria. When the Seventh Army was deactivated in March 1946, Truscott's Third Army took over the Western Military District (the U.S.-occupied parts of Baden, Württemberg and Hesse-Darmstadt).

Will Lang Jr. from Life (magazine) wrote a biography on Truscott that appeared in the October 2, 1944 issue of LIFE.

After leaving the army, General Truscott began work on his book Command Missions, which was published in 1954 (ISBN 0-89141-364-2), and The Twilight of the U.S. Cavalry (ISBN 0-7006-0932-6). The latter book was published after his death by his son, Lucian III, in 1989.[8] Seven months after the publication of Command Missions, Congress passed Public Law 88-508, which gave Truscott an honorary promotion to four-star general.[8]

General Truscott helped evaluate officers as a member of the War Department Screening Board. Then in 1948–1949, he spent a year as the Chairman of the Army Advisory Board for Amphibious Operations, at Fort Monroe, Virginia. It was between meetings of this board that he began assembling the material for his two books.[9]

In 1951, Walter Bedell Smith, Director of the Central Intelligence Agency (CIA), appointed Truscott as "Special Consultant to the United States Commissioner" in Frankfurt, Germany. However, this was simply a cover for his real assignment as senior Central Intelligence Agency representative in Germany. Truscott had been placed in charge of cloak-and-dagger operations in a vital part of Europe. This only came to light after declassification of a secret memorandum in 1994.[10]

In 1953, President Eisenhower approved CIA Director Allen Dulles' recommendation that General Truscott be appointed the CIA's Deputy Director for Coordination. This appointment meant that Truscott was now controlling the agency's rapidly expanding network of agents world-wide. His responsibilities included facilitating the overthrow of governments in Iran and Guatemala.[11] Truscott was involved in planning Operation PBSUCCESS, the CIA mission to overthrow Guatemalan President Jacobo Árbenz. According to Harry Jeffers' biography, Truscott was instrumental in convincing Eisenhower to support PBSUCCESS with air power.[12] However, another biography by William Heefner suggests that specifics of Truscott's involvement cannot be substantiated.[13]

General Truscott died 12 September 1965, in Alexandria, Virginia.[5] On 29 April 1966, Truscott Hall, a bachelor officers' quarters at the Army War College, was named after him. On 17 August 1974,[5] Sarah Truscott, his wife, died and was buried next to him at Arlington Cemetery.[15]

In 2012, he was honored at his birthplace hometown of Chatfield.[16]

Truscott was portrayed by actor John Doucette in the 1970 film Patton.