The city of Luhansk (Ukrainian: Луганськ, IPA: [ɫuˈɦɑnʲsʲk]) or Lugansk (Russian: Луганск; IPA: [lʊˈgansk]), formerly known as Voroshilovgrad (1935-1958 and 1970-1990), functions as the administrative center of Luhansk Oblast in easternmost Ukraine. The city itself is also designated as city of oblast significance. Population: 425,848 (2013 est.)[1]. 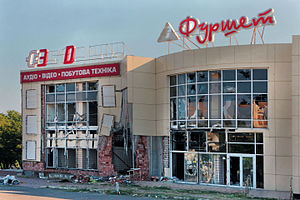 The city traces its history to 1795 when the British industrialist Charles Gascoigne founded a metal factory near the Zaporizhian Cossacks settlement Kamianyi Brid. The settlement around the factory was known as Luganskiy Zavod. In 1882 the factory settlement Luganskiy Zavod was merged with the town of Kamianyi Brid into the city of Luhansk. Located in the Donets Basin, Luhansk developed into an important industrial center of Eastern Europe, particularly as a home to the major locomotive-building company Luhanskteplovoz. The city was occupied by Nazi Germany between July 14, 1942 and February 14, 1943.

On November 5, 1935, the city was renamed Voroshilovgrad (Russian: Ворошиловград/Ukrainian: Ворошиловград - Voroshilovhrad) in honour of Soviet military commander and politician Kliment Voroshilov. On March 5, 1958, with the call of Khrushchev not to give names of living people to cities, the old name was reinstated.[2][3] On January 5, 1970, after the death of Voroshilov on December 2, 1969, the name changed again to Voroshilovgrad. Finally, on May 4, 1990, a decree of the Supreme Soviet of the Ukrainian SSR gave the city back its original name.

During the 2014 protests in Eastern Ukraine, separatists seized governmental buildings in the region proclaiming the Luhansk People's Republic. An independence referendum was held on May 11, 2014. The legitimacy of the referendums was not recognized by most governments.[4] However, the Luhansk People's Republic was recognized by South Ossetia.[5] Ukraine does not recognize the referendum, while the EU and US said the polls were illegal.[6]

After the Ilovaisk counteroffensive, LPR forces regained Lutuhyne and other Luhansk suburbs. Ukrainian forces withdrew from the Luhansk International Airport on 1 September after heavy fighting.[12]

Luhansk is home to Zorya Luhansk which now plays in the Ukrainian Premier League annual football championship and plays at the Avanhard Stadium. The club won the 1972 Soviet Top League.

The other football team was Dynamo Luhansk.

On September 7, 2006, archaeologists in Ukraine announced that an ancient structure had been discovered near Luhansk, which the press reported as a pyramid antedating those in Egypt by at least 300 years. The stone foundations of the structure were said to resemble Aztec and Mayan pyramids in Mesoamerica. It was later concluded that the site in question was not a pyramid but was still of great interest.

During 2014 and 2015, Luhansk has been the scene of much fighting and most of these buildings are damaged to some extent. Some may be destroyed.

Monument for Revolution Heroes in Luhansk.

Luhansk is twinned with: