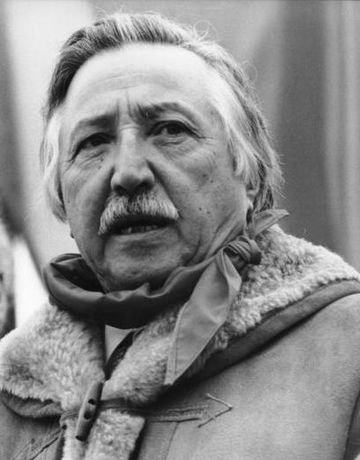 Corvalán joined the Communist Party of Chile at the age of fifteen in the city of Chillán shortly after the fall of the repressive dictatorship of Carlos Ibáñez del Campo in 1932.[3] Trained as a teacher, after 1952 he became an elected member of the PCCh's Central Committee, and after 1958 served as the Secretary-General. The party was outlawed from 1948 until 1958. In this period Corvalán was interned in the concentration camps of Pitrufquén and later in Pisagua.

On September 11, 1973, General Augusto Pinochet led a military Coup and Corvalán was among the many arrested. After the murder of Víctor Jara, he was the most prominent political prisoner in Chile. While in prison, Luis Corvalán was awarded the Lenin Peace Prize (for 1973-74). The Soviet Union launched an international campaign for his release and on December 18, 1976 Corvalán was exchanged for a notable Soviet political prisoner, dissident Vladimir Bukovsky, and received asylum in the USSR.[4]

Corvalán headed the Communist Party of Chile - both within Chile and whilst in exile - for over three decades, which covered the whole period of the Pinochet military dictatorship.[3] Corvalán returned to Chile in 1988.