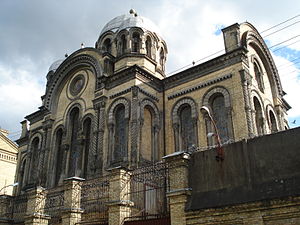 Lukiškės Prison (Lithuanian: Lukiškių tardymo izoliatorius kalėjimas, in Polish known as Więzienie na Łukiszkach or simply Łukiszki) is a prison in the center of Vilnius, Lithuania, near the Lukiškės Square. As of 2007, it housed approximately 1,000 prisoners and employed around 250 prison guards.[1] Most prisoners are there under temporary arrest awaiting court decisions or transfers to other detention facilities, but there is also a permanent prison with about 180 inmates; about 80 of whom are serving for life.[2]

After more than a century of continuous service, the prison suffers from overcrowding and is in need of investment in thorough improvements. The prison is located in a prestigious area, next to the Seimas Palace. Discussions about relocating it have continued for several years, but the process is slow. According to a 2014 plan, the prison will be relocated to Pravieniškės by 2018.[3]

Until the late 19th century the main form of punishment in Russian-held part of partitioned Poland was the katorga, or forced resettlement to a remote area to heavy labour camps or prison farms. This was true to both criminal and political prisoners alike. The Russian Penal Code of 1845 further strengthened the notion.[4] Furthermore, prior to the Emancipation reform of 1861 the serfs, who constituted most of the society in contemporary Russian-held Europe, could be incarcerated by their master rather than in state-run prisons. Because of that, for most of the 19th century the small criminal prison at Vilna's suburb of Łukiszki (modern Lukiškės), converted from an earlier Roman Catholic monastery in 1837, was enough to suit the needs of the Russian authorities.[4] Most prisoners spent only a short period in the prison before being either released, sent to the gallows or sent to distant regions of Russia for penal servitude.

However, the 1874 revision of the criminal code of Russia introduced two additional penalties: a short-term prison confinement (up to 1.5 years) and long-term prison confinement (up to 6 years).[4] Meanwhile, the old prison became dilapidated and severely overcrowded.[4] It was clear that a new prison complex was needed. Because of that in 1900 G.A. Trambitski, the official architect of the Main Prison Authority, was tasked with designing a modern, high-security prison complex.[4] Instead of moving it out of the city, the tsarist authorities decided to demolish the old prison and build the new one in its place. One of the reasons for it was the site's proximity to the newly built Provincial Court building.

The project was inspired by Jeremy Bentham's idea of Panopticon, and was based on the design of Kresty Prison in Sankt Petersburg, which in turn was modelled after Moabit Prison in Berlin and the Holmesburg Prison and Eastern State Penitentiary in Philadelphia.[4] In 1901 construction work began and the old prison was closed down and demolished.[4] The works were supervised by General Anatoliy Kelchevskiy.[4] The plot of land occupied by the old prison was too small to accommodate a modern prison. Because of that an adjoining plot of land previously occupied by a Lipka Tatar cemetery was bought for the price of 20 thousand roubles.[4]

The new complex covered the entire block. It included a penal prison with cells for 421 inmates, a detention centre for 278 inmates, as well as several other buildings.[4] Those included an office building, kitchen, bakery, baths, ice cellar and a laundry.[4] In addition, there were family apartments for the warden, his four deputies and 37 officers, and 24 smaller flats for single officers.[4] One of the most distinctive buildings in the complex was the Orthodox St. Nicholas Church, one of the finest Orthodox churches in Vilna.[4] However, as most of the inhabitants of the Vilna Governorate were Catholics or Jews, a separate Catholic church and a small synagogue were also built into one of the prison blocks.[4] The new prison had its own water supply and had its own sewage system.[4] The complex was surrounded with a stone wall.[4]

The prison complex was the most expensive building constructed in the region in the early 20th century.[4] The cells were fully equipped, heated and ventilated, and constructed entirely of non-combustible materials (except for window frames and doors).[4] The prison block containing the churches alone cost 504,000 roubles.[4] The building of the detention centre cost 285 thousand roubles,[4] while the administrative building with offices and apartments for the staff cost approximately 180 thousand roubles.[4] Despite its complexity, the project was finished in 1905, a full year ahead of schedule.[4]

The prison became more notorious during the Nazi occupation of Lithuania, when it was used by the Gestapo and Lithuanian Saugumas as a holding cell for thousands of Jews from the Vilna Ghetto and Poles, picked up in Łapankas in reprisals for actions by the Polish resistance. The majority were taken to the outskirts of Vilnius and executed at Ponary (Paneriai).[6][7][8] When Soviets reoccupied the territory in 1944, the prison was returned to the NKVD who detained thousands of Polish activists and partisans of Armia Krajowa.[9][10]