listen (help·info), "the lovely") is a Buddhist pilgrimage site in the Rupandehi District of Nepal. It is the place where, according to Buddhist tradition, Queen Mayadevi gave birth to Siddhartha Gautama in 563 BCE.[1][2] Gautama, who achieved Enlightenment some time around 528 BCE,[3][4] became the Gautama Buddha and founded Buddhism.[5][6][7] Lumbini is one of many magnets for pilgrimage that sprang up in places pivotal to the life of Gautama Buddha; other notable pilgrimage sites include Kushinagar, Bodh Gaya and Sarnath.

Lumbini has a number of temples, including the Mayadevi Temple and several others which are still under construction. Many monuments, monasteries and a museum — the Lumbini International Research Institute — are also located within the holy site. Also located there is the Puskarini or Holy Pond where the Buddha's mother took the ritual dip prior to his birth and where he, too, had his first bath. At other sites near Lumbini, earlier Buddhas were, according to tradition, born, achieved ultimate Enlightenment and finally relinquished their earthly forms. 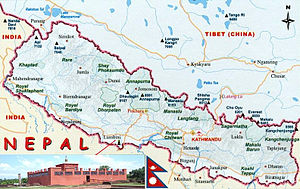 In the Buddha's time, Lumbini was situated between Kapilavastu and Devadaha (both in Nepal).[8] It was there, that the Buddha was born.[9] A pillar now marks the spot of Ashoka's visit to Lumbini. According to an inscription on the pillar, it was placed there by the people then in charge of the park to commemorate Ashoka's visit and gifts.[10] The park was previously known as Rummindei, two miles (3.2 km) north of Bhagavanpura.

In the Sutta Nipáta (vs. 683) it is stated that the Buddha was born in a village of the Sákyans in the Lumbineyya Janapada. The Buddha stayed in Lumbinívana during his visit to Devadaha and there preached the Devadaha Sutta.[11] 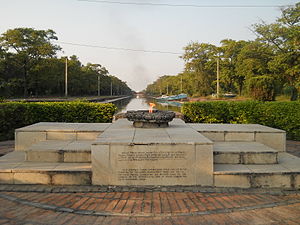 In 1896, Nepalese archaeologists (led by Khadga Samsher Rana and assisted by Alois Anton Führer) discovered a great stone pillar at Lumbini. Führer postulated that the pillar was placed at the site by Ashoka (emperor of the Maurya Empire) circa 245 BCE. Records made by the Chinese pilgrim Faxian in the early fifth century CE were also used in the process of identifying this religiously acclaimed site.

Recent excavations beneath existing brick structures at the Mayadevi Temple at Lumbini have uncovered evidence for an older timber structure beneath the walls of the newer brick Buddhist shrine, which was constructed during the Ashokan era. The layout of the Ashokan shrine closely follows that of the earlier timber structure, which suggests a continuity of worship at the site. The pre-Mauryan timber structure appears to be an ancient bodhigara (tree shrine), consisting of postholes and a wooden railing surrounding a clay floor containing mineralized tree roots that appears to have been worn smooth by visitors. Radiocarbon dating of charcoal from the wooden postholes and optically stimulated luminescence dating of elements in the soil suggests human activity (possibly pre-Buddhist tree worship) began at the site around 1000 BCE, followed by the development of a Buddhist monastery-like community by approximately 550 BCE.[12] 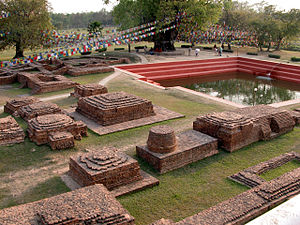 The present-day Lumbini historic site is 4.8 km (3 mi) in length and 1.6 km (1.0 mi) in width. The holy site of Lumbini is bordered by a large monastic zone in which only monasteries can be built, no shops, hotels or restaurants. It is separated into an eastern and western monastic zone, the eastern having the Theravadin monasteries, the western having Mahayana and Vajrayana monasteries.

The holy site of Lumbini has ruins of ancient monasteries, a sacred Bodhi tree, an ancient bathing pond, the Ashokan pillar and the Mayadevi Temple, where the supposed place of birth of Buddha is located. From early morning to early evening, pilgrims from various countries perform chanting and meditation at the site.

A non-governmental organization named Samriddhi Foundation started in 2013 working extensively in the field of education and health specially in government schools of the area where underprivileged children study. A non-governmental organisation called "Asia Pacific Exchange and Cooperation Foundation" (APECF) backed by chairman of the Unified Communist Party of Nepal (Maoist) and then Prime Minister Prachanda, the Chinese government and a UN group called "United Nations Industrial Development Organization" (UNIDO) signed a deal to develop Lumbini into a "special development zone" with funds worth $3 billion.[13] The venture was a China-UN joint project. A broader 'Lumbini Development National Director Committee' under the leadership of Pushpa Kamal Dahal was formed on 17 October 2011.[14] The six-member committee included Communist Party of Nepal (Unified Marxist-Leninist) leader Mangal Siddhi Manandhar, Nepali Congress leader Minendra Rijal, Forest Minister Mohammad Wakil Musalman, among other leaders. The committee was given the authority to "draft a master plan to develop Lumbini as a peaceful and tourism area and table the proposal" and the responsibility to gather international support for the same.[14]

Nipponzan Myohoji decided to build a Peace Pagoda in the park in 2001, which is visited by many different cultures and religions every day.

Because Hindus regard the Buddha as an incarnation of Vishnu, thousands of Hindus have began to come here on pilgrimage during the full moon of the Nepali month of Baisakh (April–May) to worship Queen Mayadevi as Rupa Devi, the mother goddess of Lumbini.

On the Nepali rupee

Nepal's central bank has introduced a 100-rupee Nepali note featuring Lumbini, the birthplace of Buddha. The Nepal Rastra Bank said the new note would be accessible only during the Dashain, Nepal's major festival in October 2013. It displays the portrait of Mayadevi, Gautam Buddha's mother in silver metallic on the front. The note also has a black dot which would help the blind recognise the note. The name of the central bank in Latin script would be printed on the note along with the date of printing in both the Christian Era and the Bikram Era. The new note is being issued following a cabinet decision 27 August.[15]