The Lun-class ekranoplan (NATO reporting name Duck) is a ground effect vehicle (GEV) designed by Rostislav Evgenievich Alexeyev and used by the Soviet and Russian navies from 1987 until sometime in the late 1990s.[1][2]

It flew using the lift generated by the ground effect of its large wings when close to the surface of the water–about 4 metres (13 ft) or less. Although they might look similar and have related technical characteristics, ekranoplans like the Lun are not aircraft, seaplanes, hovercraft, nor hydrofoils–ground effect is a separate technology altogether. The International Maritime Organization classifies these vehicles as maritime ships.[3]

The name Lun comes from the Russian for harrier.[4] 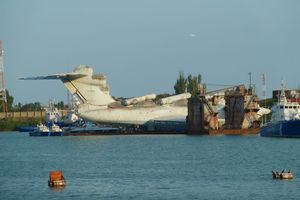 The Lun was powered with eight Kuznetsov NK-87 turbofans, mounted on forward canards, each producing 127.4 kN (28,600 lbf) of thrust. It had a flying boat hull with a large deflecting plate at the bottom to provide a "step" for takeoff.[4] It had a maximum cruising speed of 340 miles per hour (550 km/h).[2]

Equipped for anti-surface warfare, it carried the P-270 Moskit (Mosquito) guided missile. Six missile launchers were mounted in pairs on the dorsal surface of its fuselage with advanced tracking systems mounted in its nose and tail.[5]

Another version of Lun was planned for use as a mobile field hospital for rapid deployment to any ocean or coastal location. It was named the Spasatel ("Rescuer"). Work was about 90% done, when the military funding ended, and it was never completed.[3][8]

As of 2015, the A-050 ekranoplan is being developed by the Central Hydrofoil Design Bureau, two concepts of which have been shown at the MAKS (air show). According to ValueWalk, the model "will feature modern avionics and navigation", having a take-off weight of 54 tons and carrying capacity of 9 tons; it will be powered by R-195 booster engines, and have a cruising speed of 250 to 300 miles per hour (400 to 480 km/h), with a range of 3,000 miles (4,800 km). At the same time, it is thought the ground effect vehicle will be armed with cruise missiles.[1]