As of January 2014, the commune of Luxembourg City had a population of 107,247,[2] which was more than three times the population of the country's second most populous commune (Esch-sur-Alzette). The city's metropolitan population, including that of surrounding communes of Hesperange, Sandweiler, Strassen, and Walferdange, was higher than 165,000.[3] 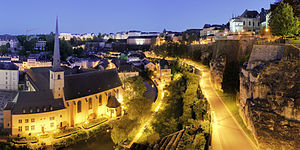 Old City of Luxembourg at night

In the Roman era, a fortified tower guarded the crossing of two Roman roads that met at the site of Luxembourg city. Through an exchange treaty with the abbey of Saint Maximin in Trier in 963, Siegfried I of the Ardennes, a close relative of King Louis II of France and Emperor Otto the Great, acquired the feudal lands of Luxembourg. Siegfried built his castle, named Lucilinburhuc ("small castle"), on the Bock Fiels ("rock"), mentioned for the first time in the aforementioned exchange treaty.

In 987 Egbert, Archbishop of Trier consecrated five altars in the Church of the Redemption (today St. Michael's Church). At a Roman road intersection near the church, a marketplace appeared around which the city developed.

The city, because of its location and natural geography, has through history been a place of strategic military significance. The first fortifications were built as early as the 10th century. By the end of the 12th century, as the city expanded westward around the new St. Nicholas Church (today the cathedral of Notre Dame), new walls were built that included an area of 5 hectares (12 acres). In about 1340, under the reign of John the Blind, new fortifications were built that stood until 1867.

In the 17th century, the first casemates were built; initially, Spain built 23 km (14 mi) of tunnels, starting in 1644.[6] These were then enlarged under French rule by Marshal Vauban, and augmented again under Austrian rule in the 1730s and 1740s.

During the French Revolutionary Wars, the city was occupied by France twice: once, briefly, in 1792–3, and, later, after a seven-month siege.[7] Luxembourg held out for so long under the French siege that French politician and military engineer Lazare Carnot called Luxembourg "the best fortress in the world, except Gibraltar", giving rise to the city's nickname: the 'Gibraltar of the North'.[7]

Nonetheless, the Austrian garrison eventually surrendered, and as a consequence, Luxembourg was annexed by the French Republic, becoming part of the département of Forêts, with Luxembourg City as its préfecture. Under the 1815 Treaty of Paris, which ended the Napoleonic Wars, Luxembourg City was placed under Prussian military control as a part of the German Confederation, although sovereignty passed to the House of Orange-Nassau, in personal union with the United Kingdom of the Netherlands.

After the Luxembourg Crisis, the 1867 Treaty of London required Luxembourg to dismantle the fortifications in Luxembourg City. Their demolition took sixteen years, cost 1.5 million gold francs, and required the destruction of over 24 km (15 mi) of underground defenses and 4 hectares (9.9 acres) of casemates, batteries, barracks, etc.[8] Furthermore, the Prussian garrison was to be withdrawn.[9]

When, in 1890, Grand Duke William III died without any male heirs, the Grand Duchy passed out of Dutch hands, and into an independent line under Grand Duke Adolphe. Thus, Luxembourg, which had hitherto been independent in theory only, became a truly independent country, and Luxembourg City regained some of the importance that it had lost in 1867 by becoming the capital of a fully independent state.

Despite Luxembourg's best efforts to remain neutral in the First World War, it was occupied by Germany on 2 August 1914. On 30 August, Helmuth von Moltke moved his headquarters to Luxembourg City, closer to his armies in France in preparation for a swift victory. However, the victory never came, and Luxembourg would play host to the German high command for another four years. At the end of the occupation, Luxembourg City was the scene of an attempted communist revolution; on 9 November 1918, communists declared a socialist republic, but it lasted only a few hours.[10]

In 1921, the city limits were greatly expanded. The communes of Eich, Hamm, Hollerich, and Rollingergrund were incorporated into Luxembourg City, making the city the largest commune in the country (a position that it would hold until 1978).

In 1940, Germany occupied Luxembourg again. The Nazis were not prepared to allow Luxembourgers self-government, and gradually integrated Luxembourg into the Third Reich by informally attaching the country administratively to a neighbouring German province. Luxembourg City was liberated on 10 September 1944.[11] The city was under long-range bombardment by the German V-3 cannon in December 1944 and January 1945. 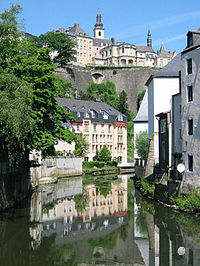 View from the Grund up to the Old Town

Luxembourg City lies on the southern part of the Luxembourg plateau, a large Early Jurassic sandstone formation that forms the heart of the Gutland, a low-lying and flat area that covers the southern two-thirds of the country.

The city centre occupies a picturesque site on a salient, perched high on precipitous cliffs that drop into the narrow valleys of the Alzette and Pétrusse rivers, whose confluence is in Luxembourg City. The 70 m (230 ft) deep gorges cut by the rivers are spanned by many bridges and viaducts, including the Adolphe Bridge, the Grand Duchess Charlotte Bridge, and the Passerelle. Although Luxembourg City is not particularly large, its layout is complex, as the city is set on several levels, straddling hills and dropping into the two gorges.

The commune of Luxembourg City covers an area of over 51 km2 (20 sq mi), or 2% of the Grand Duchy's total area. This makes the city the fourth-largest commune in Luxembourg, and by far the largest urban area. Luxembourg City is not particularly densely populated, at about 1,700 people per km2; large areas of Luxembourg City are maintained as parks, forested areas, or sites of important heritage (particularly the UNESCO sites), while there are also large tracts of farmland within the city limits.

Luxembourg City is subdivided into twenty-four quarters, which cover the commune in its entirety. The quarters generally correspond to the major neighbourhoods and suburbs of Luxembourg City, although a few of the historic districts, such as Bonnevoie, are divided between two quarters.

Considering its latitude, Luxembourg City has a mild oceanic climate, with moderate precipitation, cold to cool winter temperatures and temperate summers. Moderate to heavy cloud cover is present for more than two-thirds of the year. 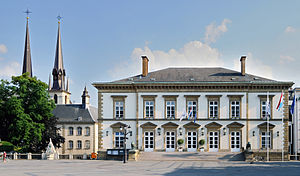 Luxembourg City Hall is the heart of the communal administration, and hosts the offices of both the communal council and the mayor.

Under the Luxembourgian constitution, local government is centred on the city's communal council. Consisting of twenty-seven members (fixed since 1964), each elected every six years on the second Sunday of October and taking office on 1 January of the next year,[16] the council is the largest of all communal councils in Luxembourg. The city is nowadays considered a stronghold of the Democratic Party (DP),[17] which is the third-largest party nationally. Currently, the Democratic Party is the largest party on the council, with eleven councillors.[18]

The city's administration is headed by the mayor, who is the leader of the largest party on the communal council. After Xavier Bettel became Luxembourg's new prime minister on 4 December 2013, Lydie Polfer (DP) was sworn in as new mayor of Luxembourg on 17 December of the same year. The mayor leads the cabinet, the collège échevinal, in which the DP forms a coalition with The Greens.[19] Unlike other cities in Luxembourg, which are limited to four échevins at most, Luxembourg is given special dispensation to have six échevins on its collège échevinal.[20]

Luxembourg City is the Seat for the Luxembourg Government. The Grand Ducal Family of Luxembourg lives at Berg Castle in Colmar-Berg. 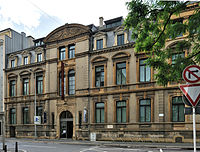 Casino Luxembourg is currently used for exhibitions of local art.

Despite the city's comparatively small size, it has several notable museums: the recently renovated National Museum of History and Art (MNHA), the Luxembourg City History Museum, the new Grand Duke Jean Museum of Modern Art (Mudam) and National Museum of Natural History (NMHN). The city of Luxembourg itself is on the UNESCO World Heritage List, on account of the historical importance of its fortifications.[21] In addition to its two main theatres, the Grand Théâtre de Luxembourg and the Théâtre des Capucins, there is a new concert hall, the Philharmonie, as well as a conservatory with a large auditorium. Art galleries include the Villa Vauban, the Casino Luxembourg and Am Tunnel.[22]

Luxembourg was the first city to be named European Capital of Culture twice. The first time was in 1995. In 2007, the European Capital of Culture[23] was to be a cross-border area consisting of the Grand Duchy of Luxembourg, the Rheinland-Pfalz and Saarland in Germany, the Walloon Region and the German-speaking part of Belgium, and the Lorraine area in France. The event was an attempt to promote mobility and the exchange of ideas, crossing borders in all areas, physical, psychological, artistic and emotional.

Luxembourg City is also famed for its wide selection of restaurants and cuisines, including four Michelin starred establishments.[24]

The ING Europe Marathon has been contested annually in the capital since June 2006.It attracted 11,000 runners and over 100,000 spectators during the 2014 edition

The BGL Luxembourg Open is a tennis tournament held since 1991 in the capital. The tournament runs from 13 to 21 October. BGL BNP Paribas, one of the most famous sponsors in the world of tennis, is the contracted title sponsor of the tournament until 2014.

The D'Coque National Sporting and Cultural Centre, in the quarter of Kirchberg, is the largest sporting venue in the country, with a capacity of 8,300 for indoor sports and swimming. 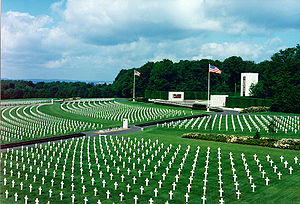 The Luxembourg American Cemetery and Memorial

Places of interest include the Gothic Revival Cathedral of Notre Dame, the fortifications, the AM Tunnel (an art gallery underground), the Grand Ducal Palace, the Gëlle Fra war memorial, the casemates, the Neumünster Abbey, the Place d'Armes, the Adolphe Bridge and the city hall. The city is the home of the University of Luxembourg and RTL Group.

The Second World War Luxembourg American Cemetery and Memorial is located within the city limits of Luxembourg at Hamm. This cemetery is the final resting place of 5,076 American military dead, including General George S. Patton. There is also a memorial to 371 Americans whose remains were never recovered or identified.

Luxembourg is situated in the heart of Europe in the Gold Triangle between Frankfurt, Paris and Amsterdam. It is therefore connected to several motorways and international routes. 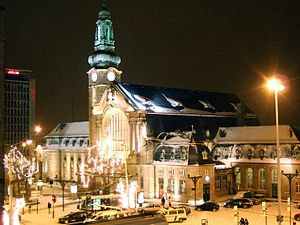 Luxembourg City has a network of 27 bus routes, operated by the buses of the City of Luxembourg (AVL), partly subcontracted to private bus companies. There is also a free bus service linking the Glacis to the Central Station, the "Joker Line" for seniors, and a "City night network". The city also owns 5 free carparks, situated at the entry points of Luxembourg (Beggen: 160 cars, Bouillon: 2442, Kirchberg: 265, Kockelscheuer: 567, Luxembourg-Sud: 881). Those "Park & Ride" carparks are connected to the bus network with the aim of encouraging people to commute into town by bus.

A new tramway going from the Cloche d'or to Findel International Airport will be completed in 2020-21.[26]

Luxembourg City has only one railway station, the main one of the country, which is also the terminus of all the lines in the Grand Duchy. It is owned by the state of Luxembourg and by the Luxemburgish railway company: the CFL. It is connected to the German, Belgian and French railway network via several trains per hour. The station is also connected to the French TGV Est network (with which connections are provided to Paris and Strasbourg) and to Basel and Zürich in Switzerland via two daily international trains (which proceed then to Brussels)

Luxembourg is served by the only international airport in the country: Luxembourg Findel International Airport (codes: IATA: LUX, ICAO: ELLX). It is situated in the municipality of Sandweiler, 6 kilometres (3.7 miles) from the City. It is linked to the city centre by bus, but railway and tram links are planned. The airport is the main base for the two Luxembourgish airlines, Luxair and Cargolux.

Luxembourg is a fellow member of the QuattroPole union of cities, along with Trier, Saarbrücken, and Metz (neighbouring countries: Germany and France).

Luxembourg is twinned with: