The Lvov–Sandomierz Offensive or Lvov-Sandomierz Strategic Offensive Operation (Russian: Львовско-Сандомирская стратегическая наступательная операция) was a major Red Army operation to force the German troops from Ukraine and Eastern Poland. Launched in mid-July 1944, the Red Army achieved its set objectives by the end of August.

The offensive was composed of three smaller operations:

The Lvov–Sandomierz Offensive is generally overshadowed by the overwhelming successes of the concurrently conducted Operation Bagration that led to the destruction of Army Group Centre. However, most of the Red Army and Red Air Force resources were allocated, not to Bagration's Belorussian operations, but the Lvov-Sandomierz operations.[4] The campaign was conducted as Maskirovka. By concentrating in southern Poland and Ukraine, the Soviets drew German mobile reserves southward, leaving Army Group Centre vulnerable to a concentrated assault.[5] When the Soviets launched their Bagration offensive against the Army Group, it would create a crisis in the central German front, which would then force the powerful German Panzer forces back to the central front, leaving the Soviets free to pursue their objectives in seizing the Vistula bridges and gaining a foothold in Romania.[6]

By early June 1944, the forces of Generalfeldmarschall Walter Model's Army Group North Ukraine had been pushed back beyond the Dniepr and were desperately clinging to the north-western corner of Ukraine. Joseph Stalin ordered the total liberation of Ukraine, and Stavka set in motion plans that would become the Lvov-Sandomierz Operation. In the early planning stage, the offensive was known as the Lvov-Przemyśl Operation. The objective of the offensive was for Marshal Ivan Konev's 1st Ukrainian Front to liberate Lviv and clear the German troops from Ukraine and capture a series of bridgeheads on the Vistula river.[7]

Stavka was also planning an even larger offensive, codenamed Operation Bagration to coincide with Konev's offensive. Operation Bagration objective was no less than the complete liberation of Belarus, and also to force the Wehrmacht out of eastern Poland. The Lvov-Sandomierz Strategic Offensive Operation was to be the means of denying transfer of reserves by the OKH to Army Group Centre, thus earning itself the lesser supporting role in the summer of 1944. 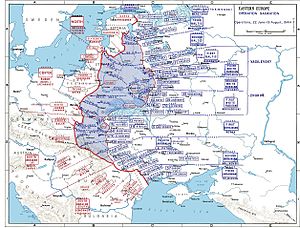 German and Soviet deployments on the Eastern Front, June to August 1944, showing Operation Bagration to the north, Lvov-Sandomierz to the south. The encirclement of the German XIII Army Corps at Brody is shown in Konev's First Ukrainian command.

While the Stavka was concluding its offensive plans Generalfeldmarschall Model was removed from command of the Army Group North Ukraine and replaced by Generaloberst Josef Harpe. Harpe's force included two Panzer Armies: the 1st Panzer Army, under Generaloberst Gotthard Heinrici and the 4th Panzer Army under General der Panzertruppen Walther Nehring. Attached to the 1st Panzer Army was the Hungarian First Army. Harpe could muster only 420 tanks, StuG's and other assorted armoured vehicles. His Army Group comprised around 900,000 men;[1] The Army Group was supported by the 700 aircraft of Luftflotte 4, including the veteran air units of VIII Fliegerkorps, and the 300-400 aircraft of the nearby Luftflotte 6. However, due to the complicated inter-service chain of command, Harpe could not directly control the Luftwaffe units.

The 1st Ukrainian Front forces under Konev considerably outnumbered the Army Group North Ukraine. The 1st Ukrainian Front could muster over 1,002,200 troops,[2] some 2,050 tanks, about 16,000 guns and mortars, and over 3,250 aircraft of the 2nd Air Army commanded by General S.A. Krasovsky.[8] In addition the morale of Konev's troops was extremely high following the recent victories in Ukraine. They had been on the offensive for almost a year, and were witnessing the collapse of Army Group Centre to their North.

The 1st Ukrainian Front attack was to have two axes of attack. The first, aiming towards Rava-Ruska, was to be led by 3rd Guards, 1st Guards Tank and 13th Armies. The second pincer was aimed at Lviv itself, and was to be led by 60th, 38th, 3rd Guards Tank and 4th Tank Armies. The Red Army achieved massive superiority against the Germans by limiting their attacks to a front of only 26 kilometres. Konev had concentrated some 240 guns and mortars per kilometer of front.

On the 14 July 1944, the assault with the objective of liberating Lviv was begun to the south of the XIII Army Corps, which had positions near the town of Brody, an area of Red Army failure earlier in the war. Red Army units had punched through the line near Horokhiv to the north and at Nysche in the south, leaving the XIII Corps dangerously exposed in a salient. The northern pincer towards Rava-Ruska now began to split, turning several units of the 13th Army south in an attempt to encircle XIII Army Corps.

The northern forces soon encountered weak elements of the 291st and 340th Infantry Divisions, but these were quickly swept aside. On 15 July, Generaloberst Nehring, realising his 4th Panzer Army was in serious jeopardy, ordered his two reserve divisions, the 16th and 17th Panzer Divisions to counterattack near Horokiv and Druzhkopil in an attempt to halt the Soviet northern assault. The two divisions could muster only 43 tanks between them and despite their best efforts, the German counterattack soon bogged down. The massively superior Red Army forces soon forced the two Panzer divisions to join the retreating infantry divisions. Konev ordered Mobile Group Baranov into the breach to help exploit the breakthrough. The Mobile Group advanced quickly, under cover of air support, and over the next three days managed to capture the town of Kamionka Strumilowa and to seize and hold a bridgehead on the western bank of the Southern Bug River, thus cutting the XIII Army Corps' line of communication and cutting off their path of retreat.

German artillery from both Сorps and the 18th Artillery Division began saturating the narrow salient, dubbed the Koltiv Corridor. A hasty counterattack by the 1st Panzer and 8th Panzer Divisions took place, accompanied by elements of the 14th Waffen Grenadier Division of the SS Galizien (1st Ukrainian). While the Galizien and 1st Panzer fought well, the 8th Panzer division got lost, and found itself in the XIII Army Corps area. Cut off from the XLVIII Panzer Corps and the 1st Panzer Division, it was unable to take part in the attack. Despite initial gains, the 1st Ukrainian Front finally managed to halt the German attack, with the help of the 2nd Air Army which dropped 17,200 bombs[citation needed] on the attacking panzers. The absence of 8th Panzer Division meant that the attack was doomed to fail. The commander of 8th Panzer had ignored explicit orders, and attempted to lead his force on a short cut. Instead, the division was strung out on the Zolochiv - Zboriv section of the Lviv - Ternopil road, and suffered immense losses from Red Air Force Il-2s. Despite this, the southern attack was slowing.

On the 16 July, Konev took a great risk and committed Lieutenant General Pavel Rybalko's 3rd Guards Tank Army to the southern assault. This meant that the Army would have to travel through the narrow Koltiv Corridor, constantly under artillery fire and fierce German counterattacks. The 3rd Guards Tank tilted the balance in the Lviv direction, and soon the Soviet advance resumed its advance west. The commander of the XIII Army Corps realised that his Corps needed to retreat if it were to avoid encirclement. The order was given for all Corps units to fall back to the Prinz-Eugen-Stellung, a series of unmanned defensive positions built in June 1944 which ran partly along the Strypa river about 35 km west of Ternopil. Strong 1st Ukrainian Front attacks throughout 17 July succeeded in capturing parts of the Prinz-Eugen-Stellung. The 14th Waffen Grenadier Division of the SS joined the combat in an attempt to recapture these lost positions, but after some success ran into a unit of Soviet IS-2 tanks which put an end to the SS advance. Despite repeated warnings from his subordinates, the Corps commander, General der Infanterie Arthur Hauffe, did not order further withdrawal, condemning the three XIII Army Corps divisions and Korps-Abteilung C in the Brody salient to their fate.[9]

On 18 July, renewed 1st Ukrainian Front attacks resulted in a breakthrough in the Lviv operational direction. Late in the day, the 1st Ukrainian Front spearheads met near the town of Busk. The encirclement was complete. 45,000 men of the XIII Army Corps were trapped around Brody, and a 200 km breach had been created along the Army Group North Ukraine's front.

For the men trapped at Brody, help would not come. Despite several desperate attacks by the exhausted and under strength forces of XLVIII Panzer Corps and XXIV Panzer Corps, the 1st Ukrainian Front cordon continued to tighten. Under continued 1st Ukrainian Front attacks, Harpe ordered his forces to fall back, abandoning the trapped XIII Army Corps. Under constant artillery and aerial bombardment, the beleaguered forces made several breakout attempts, but these were easily repulsed by the 1st Ukrainian Front armoured forces and the Germans suffered heavy casualties. On 22 July, a 1st Ukrainian Front attack cut the pocket in two, and by nightfall almost all resistance had been eliminated. The scattered survivors broke up into small groups and attempted to break out. Few reached Axis lines, but among them were 3,500 men of the Galizien SS. Before the operation, the division had numbered 11,000 men. Konev was elated at the unexpected success of the operation. Harpe's Army Group was falling back; the 4th Panzer Army to the Vistula River and the 1st Panzer Army along with 1st Hungarian Army to the area around the Carpathian Mountains.

Lviv itself was occupied again by the Soviets on 26 July, the first time being in September 1939 during the Nazi-Soviet alliance and joint invasion of Poland. This time, the city was retaken by the 1st Ukrainian Front, a Soviet force, relatively easily. The Germans had been completely forced out from Western Ukraine. Seeing this success, Stavka issued new orders on 28 July. Konev was to attack across the Vistula and to capture the city of Sandomierz, in Nazi-occupied southern Poland. Ukrainian hopes of independence were squashed amidst the overwhelming force of the Soviets, much like in Estonia, Latvia, and Lithuania. The Ukrainian Insurgent Army, UPA, would continue waging a guerrilla war against the Soviets well into the 1950s.

The renewed Soviet offensive got underway on 29 July, with Konev's spearheads quickly reaching the Vistula and establishing a strong bridgehead near Baranów Sandomierski. However, strong German counterattacks near Sandomierz prevented further expansion of the Soviet bridgehead. In early August, Harpe gained some respite. Five divisions, including one Panzer division, were transferred from Army Group South Ukraine. These were immediately thrown into action around Sandomierz. Soon after, another five German divisions, three Hungarian divisions, six StuG brigades and the 501st Heavy Tank Battalion (equipped with Tiger II tanks) were placed under Harpe's command.

Large-scale German counterattacks were launched in an attempt to throw the Soviets back across the Vistula. Using the towns of Mielec and Tarnobrzeg on the eastern bank of the river as bases, these attacks caused heavy casualties to the Soviet forces. By mid-August, Konev's spearhead, the 6th Guards Tank Corps had only 67 tanks remaining. The Germans launched a fierce counterattack with the 501st Heavy Tank Battalion and the 6th Panzer Division, totaling around 140 tanks including 20 Tiger IIs. Despite being heavily outnumbered, the 6th Guards held the bridgehead, knocking out 10 Tiger IIs. By 16 August, the German counterattacks were beginning to lose steam, and Rybalko, the commander of the bridgehead, was able to expand the Soviet controlled area by a depth of 120 kilometers, capturing the city of Sandomierz. With both sides exhausted, the fighting died down and the Lvov–Sandomierz Offensive was deemed complete.