From Infogalactic: the planetary knowledge core
Jump to: navigation, search
For the ship which bears her name, see MV Lyubov Orlova. 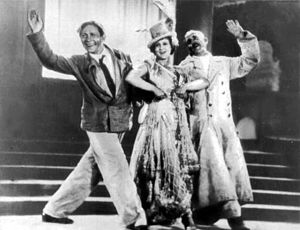 She was born to a family of Russian nobles in Zvenigorod near Moscow and grew up in Yaroslavl. When she was seven, Fyodor Shalyapin predicted her future as a famous actress.

Orlova studied in Moscow Conservatory but did not graduate because she had to work to support her parents. Her first husband, a Soviet economist Andrei Berezin, was arrested in 1930. However, this did not affect her successful career.

Orlova's performance in a very popular 1934 comedy, Jolly Fellows, earned the young star the sympathy of Stalin and the title "Honorable actor of the RSFSR". Soon she married the movie director Grigori Aleksandrov.

In the next years, she starred in four popular movies which also became instant Soviet classics: Circus (1936), Volga-Volga (1938), Bright Path (1940), and Spring (1947). She was awarded the Stalin Prize (1941). In 1950, she became the first woman to receive the title of the People's Artist of the USSR exclusively for her cinematic works. After that, she switched to playing in theatre productions of Yuri Zavadsky's company.

A minor planet, 3108 Lyubov, discovered by Soviet astronomer Lyudmila Zhuravlyova in 1972, is named after her.[1] Her first and last name are also meaningful words in Russian: любовь means "love", and Орлова is the feminine form of орлов "eagle".

A cruise ship named after the actress was built by the Soviet Union in Yugoslavia in 1976 for expeditions to Antarctica and the Arctic Circle. In early 2014, after years in private hands, bankruptcy, and reportedly being set adrift in the North Atlantic by Canadian authorities, the abandoned hulk gained attention for possibly being overrun by rats and threatening to run aground on European Atlantic shores.[2][3]