Lyudmila Narusova was born in Bryansk, USSR. Her father, Borish Narusovich, was Jewish.[3][4] In 1969-1974 she studied history in Saint Petersburg State University. Then, in 1977-1980 she studied history at the graduate school of the Institute of History of the USSR Academy of Sciences and worked at Saint Petersburg State University. In 1980 she married Anatoly Sobchak.[5] After obtaining Ph.D. in History (Russian: кандидат наук), she taught history at the St. Petersburg Academy of Culture.[6] 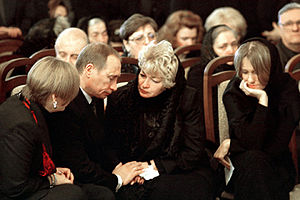 Funerals of Sobchak. Vladimir Putin with the widow and daughter of the late mayor of Saint Petersburg

Lyudmila Narusova is the widow of Anatoly Sobchak (1937—2000), who was a prominent Russian politician, mentor and teacher of both Vladimir Putin and Dmitry Medvedev, and the mother of Kseniya Sobchak (born 1981), who is a celebrity widely known in Russia as a presenter on the reality show Dom-2 and other TV-shows.[7]