Born in Bila Tserkva on July 12, 1916, Pavlichenko (née Belova) moved to Kyiv with her family at the age of fourteen. There she joined a OSOAVIAKhIM shooting club and developed into an amateur sharpshooter, while working as a grinder at the Kyiv Arsenal factory.[5] In 1937, as a student of Kyiv University she completed a master's degree in history, focusing on the life of Bohdan Khmelnytsky.[6]

In June 1941, 24-year-old Pavlichenko was in her fourth year of studying history at the Kyiv University when Germany began its invasion of the Soviet Union.[5] Pavlichenko was among the first round of volunteers at the recruiting office, where she requested to join the infantry and subsequently she was assigned to the Red Army's 25th Rifle Division;[5] Pavlichenko had the option of becoming a nurse but refused; "I joined the army when women were not yet accepted".[5] There she became one of 2,000 female snipers in the Red Army, of whom about 500 survived the war. She made her first two kills as a sniper near Belyayevka, using a Tokarev SVT-40 semi-automatic rifle with 3.5X telescopic sight.[5] 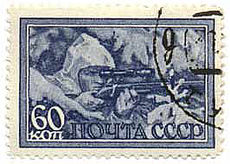 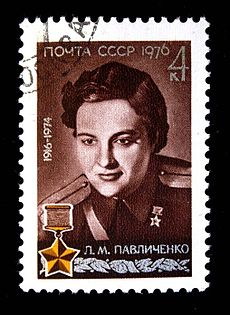 Private Pavlichenko fought for about two and a half months near Odessa where she recorded 187 kills.[6] When the Romanians gained control of Odessa her unit was sent to Sevastopol on the Crimean Peninsula,[6] where she fought for more than eight months.[5][7] In May 1942, Lieutenant Pavlichenko was cited by the Southern Army Council for killing 257 German soldiers. Her total of confirmed kills during World War II was 309,[4][5] including 36 enemy snipers.

In June 1942, Pavlichenko was wounded by mortar fire. Because of her growing status she was withdrawn from combat less than a month after recovering from her wound.

Pavlichenko was sent to Canada and the United States for a publicity visit and became the first Soviet citizen to be received by a US President when Franklin Roosevelt welcomed her to the White House. Pavlichenko was later invited by Eleanor Roosevelt to tour America relating her experiences. While meeting with reporters in Washington, D.C. she was dumbfounded about the kind of questions put to her. "One reporter even criticized the length of the skirt of my uniform, saying that in America women wear shorter skirts and besides my uniform made me look fat".[3][8] Pavlichenko appeared before the International Student Assembly being held in Washington, D.C., and later attended CIO meetings and made appearances and speeches in New York City and Chicago. In Chicago, she stood before large crowds, chiding the men to support the second front. “Gentlemen,” she said, “I am 25 years old and I have killed 309 fascist occupants by now. Don’t you think, gentlemen, that you have been hiding behind my back for too long?” Her words settled on the crowd, then caused a surging roar of support.[9] The United States gave her a Colt semi-automatic pistol. In Canada she was presented with a sighted Winchester rifle now on display at the Central Armed Forces Museum in Moscow. While visiting in Canada along with Vladimir Pchelintsev (fellow sniper) and Nikolai Krasavchenko (Moscow fuel commissioner) they were greeted by thousands of people at Toronto's Union Station.

Visit to the United Kingdom

On Friday November 21, 1942, Lieutenant Pavlichenko visited Coventry, UK, and accepted donations of £4,516 from Coventry workers to pay for three X-ray units for the Red Army. She also visited Coventry Cathedral ruins, then the Alfred Herbert works and Standard Car Factory from where most funds had been raised. She had earlier in the day inspected a Birmingham factory.[10]

Having attained the rank of major, Pavlichenko never returned to combat but became an instructor and trained Soviet snipers until the war's end.[5] In 1943, she was awarded the Gold Star of the Hero of the Soviet Union,[11] and was commemorated on a Soviet postage stamp.

After the war, she finished her education at Kiev University and began a career as a historian. From 1945 to 1953, she was a research assistant of the Chief HQ of the Soviet Navy. She was later active in the Soviet Committee of the Veterans of War.[5] Pavlichenko died on October 10, 1974 at age 58, and was buried in the Novodevichye Cemetery in Moscow.[5]

Pavlichenko’s war record was recognized in the Soviet Union by two commemorative stamps with her portrait (see images above)[12] and in the United States, by a song ("Miss Pavlichenko") composed during World War II by folk singer Woody Guthrie, as a tribute to her war record and to memorialize her visits to the United States and Canada.[13] It was released as part of the Asch Recordings.[14][15]