From Infogalactic: the planetary knowledge core
Jump to: navigation, search
The native form of this personal name is Rákosi Mátyás. This article uses the Western name order.

Rákosi was born in Ada, then a village in Bács-Bodrog County[1] in Austria-Hungary), now a town in Vojvodina, Serbia. Born into a Jewish family, the fourth son of a grocer (his mother would give birth to seven more children),[1] he later repudiated religion and totally repudiated Judaism. One of his younger brothers was Ferenc Rákosi (1904–2006), who later adopted the name Ferenc Biró, a noted mechanical engineer and, for a time, General Manager of the Mátyás Rákosi Steel and Metal Works during his brother's rule.[10] Rákosi's paternal grandfather participated in the Hungarian Revolution of 1848, as a result he had to flee the village following the defeat. Rákosi's father, József Rosenfeld was called "Kossuth's Jew" by the villagers, because he had been a member and avid supporter of the oppositionist Party of Independence and '48. He changed his surname Rosenfeld to Rákosi in 1903.[11]

Rákosi was a diligent and good student during his childhood;[12] he finished his elementary studies in Sopron, then took his final exam at the High Technical Gymnazium of Szeged in 1910. After that he studied external trade at the Eastern Commerce Academy. He studied on scholarships for a year each in Hamburg (1912) and London (1913).

Still as a student in Hungary, he joined the Hungarian Social Democratic Party (MSZDP) in 1910 and was also a secretary and active member of the anarcho-syndicalist student movement, the Galilei Circle.[13] He served in the Austro-Hungarian Army during the First World War and was captured on the Eastern Front in 1915 and held as a prisoner-of-war in Far Eastern POW camps by the Russian authorities until the end of the war. Taking advantage of the chaotic situation in Russia, he successfully escaped from his detainment and moved to Petersburg, centre of the Bolshevik Revolution.

After returning to Hungary, he participated in the communist movement of Béla Kun and also joined the Party of Communists in Hungary. During the short-lived 133-day Communist rule after the resignation of President Mihály Károlyi, when the Hungarian Soviet Republic established, Rákosi served as Deputy People's Commissar for Trade from 21 March to 3 April in the Revolutionary Governing Council led by Sándor Garbai. Between 3 April and 24 June 1919, Rákosi was one of the six people's commissars for social production, alongside Jenő Varga, Antal Dovcsák, Gyula Hevesi, József Kelen and Ferenc Bajáki. He was also involved in the Hungarian Red Army's Northern and Eastern military campaigns against the newly-formed Czechoslovakia and Romania, respectively. At the end of July 1919, he was promoted to Commander of the internal law-enforcement Red Guard for a short time.

Following the Soviet Republic's fall Rákosi fled Hungary on 2 August 1919 through the Austrian border, eventually to the Soviet Union where he worked as part of the Communist International, including representing it at the Livorno congress of the Italian Socialist Party.[14] After returning to Hungary in 1924 he was imprisoned, and was released to the Soviet Union in 1940, in exchange for the Hungarian revolutionary banners captured by the Russian troops at Világos in 1849.[15] In the Soviet Union, he became leader of the Comintern. He returned to Debrecen, Hungary, on 30 January 1945, sent by Soviet leadership, to organize the Communist Party.[15]

Initially, Rákosi and the Communists appeared willing to work within the system. From 1947 onward, however, he and the Communists began pressuring the other parties to push out those not willing to work with the Communists on the grounds that they were "fascists" or fascist sympathizers. The process began when Smallholder Party member, Prime Minister Ferenc Nagy, was forced to resign in favour of a more pliant Smallholder, Lajos Dinnyés. Later on, after the Communists won complete control, Rákosi referred to this practice as "salami tactics," saying he destroyed the non-Communist forces in the country by "cutting them off like slices of salami."

By October 1947, Rákosi had dropped all pretense of democracy. He gave the non-Communist parties an ultimatum: cooperate with a new, Communist-dominated coalition government or go into exile.[16] By the end of 1947, the opposition parties had largely shunted aside their more courageous members, leaving them in the hands of fellow travelers willing to do the Communists' bidding. In the summer of 1948, the Communists forced the Social Democrats to merge with them to form the Hungarian Working People's Party (MDP). He also pushed out the Smallholder president, Zoltán Tildy, in favour of Social Democrat-turned-Communist Árpád Szakasits, and forced Dinnyés to resign in favour of the openly pro-Communist István Dobi. A year later, elections took place with a single list of candidates; although non-Communists nominally still figured, they were actually fellow travelers. This marked the onset of undisguised Communist rule in Hungary.

Rákosi described himself as "Stalin's best Hungarian disciple" and "Stalin's best pupil". At the height of his rule, he developed a strong cult of personality around himself.

Approximately 350,000 officials and intellectuals were purged under his rule, from 1948 to 1956.[17] Rákosi imposed totalitarian rule on Hungary — arresting, jailing and killing both real and imagined foes in various waves of Stalin-inspired political purges. In August 1952 he also became Prime Minister (Chairman of the Council of Ministers). However, on 13 June 1953, to appease the Soviet Politburo, he accepted the Soviet model of collective leadership. While he gave up the premiership to Imre Nagy, he retained the office of General Secretary. Nagy favoured a more humane way of governing, which Rákosi vigorously opposed. On 9 March 1955, the Central Committee of the MDP condemned Nagy for "rightist deviation". Hungarian newspapers joined the attacks and Nagy was blamed for the country's economic problems. On 18 April, the National Assembly unanimously sacked Nagy from his post. Although the Kremlin frowned on a return of Rákosi to the premiership, he and Nagy's successor, András Hegedüs, quickly put the country back on its previous Stalinist course. 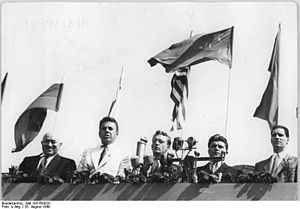 Rákosi during the 2nd World Festival of Youth and Students.

The postwar Hungarian economy suffered from multiple challenges. The most important was the destruction of assets in the war (40% of national wealth, including all bridges, railways, raw materials, machinery, etc.)[18] Hungary agreed to pay war reparations approximating US$300 million, to the Soviet Union, Czechoslovakia, and Yugoslavia, and to support Soviet garrisons. The Hungarian National Bank in 1946 estimated the cost of reparations as "between 19 and 22 per cent of the annual national income." In spite of this, after the highest historical rate of inflation in world history, the new, stable currency was successfully introduced in August 1946 on the basis of the plans of the Communist Party and the Social Democratic Party. The low production of consumer goods and the backwardness of light industries resulted in frequent shortages, especially in the countryside, leading to discontent. In addition, the huge investments in military sectors after the outbreak of the Korean War further reduced the supply of consumer goods. Because of the shortages, forced savings (state bond sales to the population) and below-inflation wage increases were introduced. 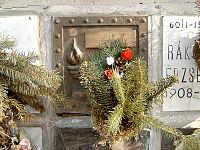 Rákosi was then removed as General Secretary of the Party under pressure from the Soviet Politburo in June 1956 (shortly after Nikita Khrushchev's Secret Speech), and was replaced by his former second-in-command, Ernő Gerő. To remove him from the Hungarian political scene, the Soviet Politburo forced Rákosi to move to the Soviet Union in 1956, with the official story being that he was "seeking medical attention." He spent the rest of his life in the Kirgiz Soviet Socialist Republic. Shortly before his death, in 1970 Rákosi was finally granted permission to return to Hungary if he promised not to engage in any political activities. He refused the deal, and remained in the USSR where he died in Gorky in 1971.

After his death, his ashes were privately returned to Hungary for burial in the Farkasréti Cemetery in Budapest. Only his initials are visible on the gravestone to avoid vandalism.