The Médaille militaire (English: Military Medal) is a military decoration of the French Republic for other ranks for meritorious service and acts of bravery in action against an enemy force. It is the third highest award of the French Republic, after the Légion d'honneur, a civil and military order, and the ordre de la Libération, a second world war-only order. The Médaille militaire is therefore the most senior entirely military active French decoration.

The award was first established in 1852 by the first President of the French Republic, Louis-Napoléon Bonaparte who may have taken his inspiration from a medal established and awarded by his father, Louis Bonaparte, King of Holland.

After the First World War, the Military Medal was also temporarily awarded for wounds received in combat.[2]

Like many other French awards, the médaille can be awarded for different reasons. It can be awarded to foreign nationals serving with or alongside the French armed forces.[2]

The Médaille militaire is a silver laurel wreath, 28 mm (1.1 in) in diameter, wrapped around a central gold medallion bearing the left profile of Marianne, effigy of the French Republic, the original 2nd Empire variant bore the left profile of Emperor Napoleon III. The central gold medallion is surrounded by a blue enamelled ring bearing the gilt inscription "RÉPUBLIQUE FRANÇAISE" (English: "FRENCH REPUBLIC") with a small gilt five-pointed star at the bottom for a 4th Republic award, three stars for a 5th Republic variant, the 3rd Republic variant bore the date 1870, the 2nd Empire variant bore the gilt inscription "LOUIS-NAPOLEON" in lieu of "RÉPUBLIQUE FRANÇAISE" and had flowers on both sides of the small star at the bottom. The original variant was topped by a silver imperial eagle with a loop through which the suspension ring passed, all other variants were and are topped by a device composed of a breastplate superimposed over crossed cannons, a naval anchor, sabres, swords and battle axes, to which the suspension ring passes through a loop for attachment to a ribbon. The reverse of the medallion is common to all variants since inception of the award, it bears the relief inscription on three lines "VALEUR ET DISPLINE" (English: "VALOUR AND DISCIPLINE) and is surrounded by a blue enamelled ring.[2]

The ribbon of the Médaille militaire is 37 mm (1.5 in) wide, yellow in color with 6 mm-wide (0.24 in) green stripes on each edge. This ribbon was borrowed from the Order of the Iron Crown which it effectively replaced in France. 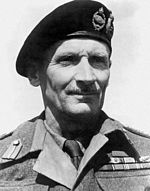 Field Marshal Montgomery, a recipient of the Médaille militaire 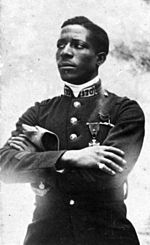 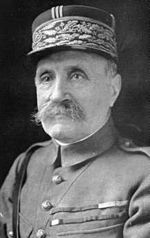 Marshal of France, Great Britain and Poland, Ferdinand Foch, a recipient of the Médaille militaire

The Médaille militaire was awarded in some number to British and allied forces (allies of the French Empire) during the Crimean War of 1854-56 and in reasonably large numbers to allied forces in the 1914-18 war. During the Second World War, the Médaille reached its highest numbers of foreign bestowals, most often to members of the British Army as well as to the United States military. The general's médaille was awarded to Winston Churchill, Franklin Delano Roosevelt and Josip Broz Tito, as supreme commanders of the UK, US and Yugoslav military forces, but to also effective military leaders, such as General of the Army Dwight Eisenhower, and to Admiral of the Fleet Andrew Cunningham, 1st Viscount Cunningham of Hyndhope.

In addition to the individual medal, the Médaille militaire is also authorized as a unit award to those military commands who display the same criteria of bravery as would be required for the individual medal. The médaille is displayed on the flag of these units. It is one of the rarest unit awards in the French military.[2]

The individuals listed below were recipients of the "Médaille Militaire:[3]