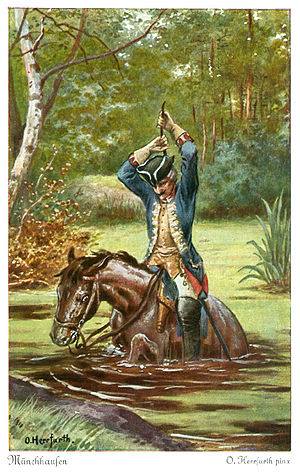 Baron Munchausen pulls himself out of a mire by his own hair (illustration by Oskar Herrfurth).

The Münchhausen trilemma is a term used in epistemology to stress the impossibility to prove any truth even in the fields of logic and mathematics. The name Münchhausen-Trilemma was coined by the German philosopher Hans Albert in 1968 in reference to a Trilemma of "dogmatism vs. infinite regress vs. psychologism" used by Karl Popper;[1] it is a reference to the problem of "bootstrapping", after the story of Baron Munchausen (in German, "Münchhausen"), pulling himself and the horse on which he was sitting out of a mire by his own hair.

It is also known as Agrippa's trilemma, after a similar argument by Sextus Empiricus, which was attributed to Agrippa the Skeptic by Diogenes Laertius; Sextus' argument, however, consists of five (not three) "modes". Popper in his original 1935 publication mentions neither Sextus nor Agrippa, but attributes his trilemma to Jakob Fries.[2]

If we ask of any knowledge: "How do I know that it's true?", we may provide proof; yet that same question can be asked of the proof, and any subsequent proof. The Münchhausen trilemma is that we have only three options when providing proof in this situation:

The first two methods of reasoning are fundamentally weak, and because the Greek skeptics advocated deep questioning of all accepted values, they refused to accept proofs of the third sort. The trilemma, then, is the decision among the three equally unsatisfying options.

In contemporary epistemology, advocates of coherentism are supposed to be accepting the "circular" horn of the trilemma; foundationalists are relying on the axiomatic argument. The view that accepts the infinite regress is called infinitism. Advocates of fallibilism, though, point out that while it is indeed correct that a theory cannot be proven universally true, it can be proven false (test method) or it can be deemed unnecessary (Occam's razor). Thus, conjectural theories can be held as long as they have not been refuted.

Agrippa and the Greek skeptics

The following tropes for Greek skepticism are given by Sextus Empiricus, in his Outlines of Pyrrhonism. According to Sextus, they are attributed only "to the more recent skeptics" and by Diogenes Laertius we attribute them to Agrippa.[3] The tropes are:

[165] According to the mode deriving from dispute, we find that undecidable dissension about the matter proposed has come about both in ordinary life and among philosophers. Because of this we are not able to choose or to rule out anything, and we end up with suspension of judgment. [166] In the mode deriving from infinite regress, we say that what is brought forward as a source of conviction for the matter proposed itself needs another such source, which itself needs another, and so ad infinitum, so that we have no point from which to begin to establish anything, and suspension of judgment follows. [167] In the mode deriving from relativity, as we said above, the existing object appears to be such-and-such relative to the subject judging and to the things observed together with it, but we suspend judgment on what it is like in its nature. [168] We have the mode from hypothesis when the Dogmatists, being thrown back ad infinitum, begin from something which they do not establish but claim to assume simply and without proof in virtue of a concession. [169] The reciprocal mode occurs when what ought to be confirmatory of the object under investigation needs to be made convincing by the object under investigation; then, being unable to take either in order to establish the other, we suspend judgment about both.[4]

With reference to these five tropes, the first and third are a short summary of the ten original grounds of doubt which were the basis of the earlier skepticism.[3] The three additional ones show a progress in the sceptical system, and a transition from the common objections derived from the fallibility of sense and opinion, to more abstract and metaphysical grounds of doubt.

According to Victor Brochard, "the five tropes can be regarded as the most radical and most precise formulation of skepticism that has ever been given. In a sense, they are still irresistible today."[5]

Jakob Friedrich Fries formulated a similar trilemma in which statements can be accepted either: [6]

The first two possibilities are rejected by Fries as unsatisfactory, requiring us to adopt the third option. Karl Popper argued that a way to avoid the trilemma was to use an intermediate approach incorporating some dogmatism, some infinite regress, and some perceptual experience. [7]

The argument proposed by Hans Albert runs as follows: All of the only three ("tri"-lemma) possible attempts to get a certain justification must fail:

An English translation of a quote from the original German text by Albert is as follows:[8]

Here, one has a mere choice between:

Albert stressed repeatedly that there is no limitation of the Münchhausen trilemma to deductive conclusions. The verdict concerns also inductive, causal, transcendental, and all otherwise structured justifications. They all will be in vain.

Therefore, certain justification is impossible to attain. Once having given up the classical idea of certain knowledge, one can stop the process of justification where one wants to stop, presupposed one is ready to start critical thinking at this point always anew if necessary.

This trilemma rounds off the classical problem of justification in the theory of knowledge.

The failure of proving exactly any truth as expressed by the Münchhausen trilemma does not have to lead to dismissal of objectivity, as with relativism. One example of an alternative is the fallibilism of Karl Popper and Hans Albert, accepting that certainty is impossible, but that it is best to get as close as we can to truth, while remembering our uncertainty.

In Albert's view, the impossibility to prove any certain truth is not in itself a certain truth. After all, one needs to assume some basic rules of logical inference to derive his result, and in doing so must either abandon the pursuit of "certain" justification, as above, or attempt to justify these rules, etc. He suggests that it has to be taken as true as long as nobody has come forward with a truth which is scrupulously justified as a certain truth. Several philosophers defied Albert's challenge; his responses to such criticisms can be found in his long addendum to his Treatise on Critical Reason and later articles.