The M10 is a federal highway in Russia connecting the country's two largest cities, Moscow and Saint Petersburg, and continuing to the border with Finland. Other than in the vicinity of Moscow and Saint Petersburg, the M10 is basically a two-lane highway (one lane for each direction), with an occasional third centre lane to allow overtaking or for left-turning traffic at intersections.

The highway Moscow - Tver - Novgorod existed even before the founding of Saint Petersburg. Along the way there were special checkpoints (Yam) in particular Yedrovo, Valday, Yazhelbitsy, Krestsy, and Bronnitsa. The first road, 778 kilometres (483 mi) long, in this area was built by order of Peter the Great from 1712 to 1746. The construction of this road was run by an office that formed for this purpose. After the completion of the road in 1755, it was transformed into the Office of the structure of public roads and later was known as the Commission on the Roads in the State.[1]

The distance from Moscow to St. Petersburg by M10 is approximately 700 km. 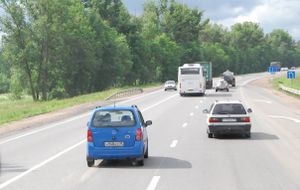 The M10 near Novgorod

The route runs through or near the cities and settlements of Khimki, Zelenograd, Solnechnogorsk, Klin, Tver, Torzhok, Vyshny Volochyok, Valdai, Kresttsy, Veliky Novgorod, Chudovo, Tosno and reaches the city border of Saint Petersburg in Pushkinsky District. The section of M10 between Moscow and St Petersburg is known as "Russia" (Russian: Россия) highway and is part of European route E105.

In Moscow, the Leningrad Highway (Russian: Ленинградское шоссе), begins from a junction of Leningradsky Prospekt avenue with the Volokolamsk Highway To the Moscow centre, the avenue continues into 1st Tverskaya-Yamskaya Street and then Tverskaya Street to Manege Square in the heart of the city.

The 'unofficial' end of the highway is since the Tsars' era commonly considered to be the Central Post Office of Saint Petersburg (Russian: Главпочтамт). Actually the Moscow Highway begins from the Victory Square in Moskovsky raion in the southern part of the city and Moskovsky Prospekt avenue which begins in the city centre on Sennaya Square, connects the highway with the centre of Saint Petersburg.

The new 4 lane toll road parallel to M10 is claimed to be built by 2018.[2] For now, only the part closest to Moscow - from the city to Sheremetyevo airport - is under construction, and the construction was hindered by the public protests in the town of Khimki as well as resistant actions of environmentalists.

Saint Petersburg to the border with Finland

From Saint Petersburg city centre to the Finnish border the distance is approximately 210 km. The route section between Saint Petersburg, and the border with Finland is known as the "Scandinavia" (Russian: Скандинавия) highway and is officially renamed to route A181, but the designation M10 is valid until 31 December 2017 as well.[3] This section is a part of the European route E18. News about the plans to expand this route section to a motorway with three lanes in each direction came out in August 2011.[4]

The road crosses the river Sister (a tributary of the Dubna )(near Klin), Volga (in Tver), Msta (near Novoselitsy), Volkhov (at Krechevitsy), etc. bridges longer than 50 m have a capacity of 60-80 tons. In Tver region (127 km, 132 miles), there are bridges with carrying capacity of 40 tons.

The road have from 2 to 10 lanes (in both directions, mostly 2). Width of the carriageway on the main stretch of road 8–11 meters. High-speed mode : 30 km / h ( at repair and detours ) to 90 km / h. However, on a segment on the territory of Moscow and Moscow region regular flow(traffic) rate exceeds the allowable limit by 30–50 km / h. In general, the M -10 is considered as full of accidents and stressful. Large flow of freight transport.[5]