The M777 howitzer is a towed 155 mm artillery piece, successor to the M198 howitzer in the United States Marine Corps and United States Army. The M777 is also used by the ground forces of Canada and Australia. It made its combat debut in the War in Afghanistan.

The M777 is manufactured by BAE Systems' Global Combat Systems division. Prime contract management is based in Barrow-in-Furness in the UK as well as manufacture and assembly of the titanium structures and associated recoil components. Final integration and testing of the weapon is undertaken at BAE's facility in Hattiesburg, Mississippi.[3]

The M777 began as the Ultralight-weight Field Howitzer (UFH), developed by VSEL's armaments division in Barrow-in-Furness, United Kingdom. This company was bought by BAE which ended up responsible for design, construction and assembly (through its US-based, BAE Systems Land and Armaments group). The M777 uses about 70% US-built parts including the gun barrel manufactured at the Watervliet Arsenal.

The M777 is smaller and 42% lighter, at under 4,100 kg (9,000 lb), than the M198 it replaces. Most of the weight reduction is due to the use of titanium. The lighter weight and smaller size allows the M777 to be transported by the MV-22 Osprey, CH-47 helicopter or trucks with ease to provide increased mobility and more compact storage over the M198. The minimal gun crew required is five, compared to a previous nine.[4]

The M777 uses a digital fire-control system similar to that found on self-propelled howitzers such as the M109A6 Paladin to provide navigation, pointing and self-location, allowing it to be put into action quickly.[citation needed] The Canadian M777 in conjunction with the traditional "glass and iron sights/mounts" also uses a digital fire control system called the Digital Gun Management System (DGMS) produced by SELEX with components of the Indirect Fire Control Software Suite (IFCSS) built by the Firepower team in the Canadian Army Land Software Engineering Centre.[5] The SELEX portion of the system, known as LINAPS, had been proven previously through earlier fielding on the British Army Royal Artillery's L118 Light Gun.[6]

The M777 may be combined with the Excalibur GPS-guided munition, which allows accurate fire at a range of up to 25 miles (40 km). This almost doubles the area covered by a single battery to about 1,250 km2. Testing at the Yuma Proving Ground by the US Army placed 13 of 14 Excalibur rounds, fired from up to 24 kilometres (15 mi), within 10 meters of their target,[7] suggesting a circular error probable of about five meters.

In June 2012, Golf Battery, 2nd Battalion, 11th Marines, out of Camp Pendleton, Calif., dropped the 155 mm M982 Excalibur round on insurgents 36 kilometers away — more than 22 miles — in Helmand province, marking the longest operational shot in the history of the M777 howitzer (and the longest operational artillery shot in history for the Marine Corps).[8] 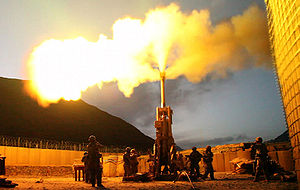 18th Field Artillery Brigade (Airborne) at Fort Bragg, North Carolina was the initial Army test bed unit for the XM777 Lightweight 155mm Howitzer which included 1st and 3rd Battalions 321st Field Artillery Regiment. Gun Section 2, 2nd Platoon (5th Section) Bravo Battery, 2–11th Field Artillery (FA) was the first US Army unit to fire the M777A2 in combat at 08:23 (Baghdad Time) on 2 January 2008 in support of Operation Iraqi Freedom. 2–11 FA deployed December 2007 with 2nd Brigade Combat Team (BCT), 25th Infantry Division out of Schofield Barracks, Hawaii. In June 2007, the M777 in its A2 configuration was assigned to the U.S. Army's 3rd Battalion, 321st Field Artillery Regiment. 3-321 FA deployed to Afghanistan in support of Operation Enduring Freedom in December 2007 and has become mission capable since January 2008 making 3–321 FA the first U.S. Army unit to utilise the M777 in combat in support of Operation Enduring Freedom. In April 2008, the M777 was deployed for testing with the 2nd battalion, 8th Field Artillery of the U.S. Army at Fort Wainwright in Fairbanks, Alaska. On 20 July 2008, at Camp Shelby, Mississippi, the 1st Battalion, 108th Field Artillery, 28th Infantry Division, Pennsylvania National Guard became the first Field Artillery unit of the National Guard to field and fire the M777. C Battery 1–108th FA was the first National Guard Unit to Shoot the M777 at Camp Shelby, Mississippi.[12] Multiple firing incidents have occurred during training with the M777 including a fatal one in February 2014 with 3-321 FA BN of 18th Fires Brigade at Fort Bragg, NC [13] and previously in 2011 with Marines from Camp LeJeune also at Fort Bragg.[14]

In May 2005, 3rd Battalion, 11th Marines, based at Marine Corps Air Ground Combat Center Twentynine Palms, became the first Marine unit to begin fielding the new M777. Five hundred and eighty systems will be supplied to the Marines, and 421 to the U.S. Army and National Guard.[15][16]

In December 2005, 1st Regiment, Royal Canadian Horse Artillery, conducted an inaugural firing of its first 155 mm M777 towed howitzers, for of a total of six guns. The six guns delivered were supplied by the United States Marine Corps under a Foreign Military Sales (FMS) contract[22] between the U.S. and Canada. First, the guns were tested by B Battery, 1 RCHA at CFB Shilo and then were deployed to Afghanistan in support of Operation Archer, and were put into service in the Canadian theatre of operations around Kandahar in early 2006. In the summer they made a significant contribution during the Battle of Panjwaii when a small number of rounds were used to huge effect on Taliban elements retreating from the battle area. Many of the 72 reported killed during the heaviest period of fighting were due to artillery fire from only two of these guns. In late fall of 2006, the Canadian M777 Howitzers were equipped with the Digital Gun Management System (DGMS), which greatly improved accuracy and led to these guns being used for Short Range Close Support of Canadian and US ground forces. However, until early 2007, ammunition supplies were constrained and led to reduced firing.[23] They proved so successful that an order for an additional six guns was placed with BAE. In May 2009, the Canadian government ordered a further 25 M777s, bringing the total to 37.[24][25] The DGMS is also being improved with integrated communications.[26]

BAE is offering M777 howitzers to the Colombian Army, along with M109A5/A6 Paladin self-propelled guns, for their artillery contest. The initial purchase is for 12 units, which may be raised to 25 units. A decision among five companies will be made in 2014.[27]

In 2011, Saudi Arabia ordered 36 M777A2 155mm towed howitzers from the United States, along with 17,136 rounds of High Explosive (HE) ammunition and 2,304 rounds of longer range Rocket Assisted Projectiles (RAPs).

The Saudis have purchased HMMWV vehicles to tow the guns, haul ammo and carry the crews and their gear. However, they didn't order any GPS guided 155mm Excalibur shells for their new M777A2 guns.[39] 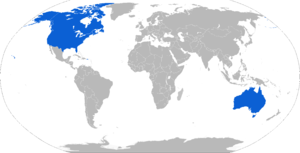 Map of M777 operators in blue