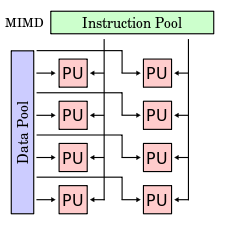 In computing, MIMD (multiple instruction, multiple data) is a technique employed to achieve parallelism. Machines using MIMD have a number of processors that function asynchronously and independently. At any time, different processors may be executing different instructions on different pieces of data. MIMD architectures may be used in a number of application areas such as computer-aided design/computer-aided manufacturing, simulation, modeling, and as communication switches. MIMD machines can be of either shared memory or distributed memory categories. These classifications are based on how MIMD processors access memory. Shared memory machines may be of the bus-based, extended, or hierarchical type. Distributed memory machines may have hypercube or mesh interconnection schemes.

An example of MIMD system is Intel Xeon Phi, descended from Larrabee microarchitecture.[1] These processors have multiple processing cores (up to 61 as of 2015) that can execute different instructions on different data.

The processors are all connected to a "globally available" memory, via either software or hardware means. The operating system usually maintains its memory coherence.[3]

For example, if we consider a bus with clients A, B, C connected on one side and P, Q, R connected on the opposite side, any one of the clients will communicate with the other by means of the bus interface between them.

MIMD machines with hierarchical shared memory use a hierarchy of buses (as, for example, in a "Fat tree") to give processors access to each other's memory. Processors on different boards may communicate through inter-nodal buses. Buses support communication between boards. With this type of architecture, the machine may support over a thousand processors.

In distributed memory MIMD machines, each processor has its own individual memory location. Each processor has no direct knowledge about other processor's memory. For data to be shared, it must be passed from one processor to another as a message. Since there is no shared memory, contention is not as great a problem with these machines. It is not economically feasible to connect a large number of processors directly to each other. A way to avoid this multitude of direct connections is to connect each processor to just a few others. This type of design can be inefficient because of the added time required to pass a message from one processor to another along the message path. The amount of time required for processors to perform simple message routing can be substantial. Systems were designed to reduce this time loss and hypercube and mesh are among two of the popular interconnection schemes.

Examples of distributed memory (multicomputers) include MPP (massively parallel processors) and COW (clusters of workstations). The former is complex and expensive: lots of super-computers coupled by broad-band networks. Examples include hypercube and mesh interconections. COW is the "home-made" version for a fraction of the price.[4]

In an MIMD distributed memory machine with a mesh interconnection network, processors are placed in a two-dimensional grid. Each processor is connected to its four immediate neighbors. Wraparound connections may be provided at the edges of the mesh. One advantage of the mesh interconnection network over the hypercube is that the mesh system need not be configured in powers of two. A disadvantage is that the diameter of the mesh network is greater than the hypercube for systems with more than four processors.