Mir (Russian: "Мир", world or peace) is a self-propelled Deep Submergence Vehicle. The project was initially developed by the USSR Academy of Sciences (now the Russian Academy of Sciences) along with Design Bureau Lazurith. Later two vehicles were ordered from Finland. The Mir 1 and Mir 2, delivered in 1987, were designed and built by the Finnish company Rauma-Repola's Oceanics subsidiary. The project was carried out under the supervision of constructors and engineers of the Shirshov Institute of Oceanology.

The vessels are designed to be used for scientific research. They might also be used to assist in submarine rescue operations, although they do not have the capacity to take anybody aboard when underwater. The carrier and command centre of both Mir submersibles is the R/V Akademik Mstislav Keldysh. The two Mir units are operated by the Russian Academy of Sciences.

The Mir submersibles can dive to a maximum depth of 6,000 metres (19,685 ft). This makes them two of only eight manned submersibles in the world that can dive beyond 3,000 metres (9,843 ft), the others being the US submersibles Alvin, Sea Cliff and Deepstar20000[citation needed], the Japanese owned Shinkai, the Chinese owned Jiaolong and the French owned Nautile. Up to 98% of the world’s oceans are no deeper than 6,000 metres. All these deep-ocean submersibles utilize three-person crews.

Traditionally, the personnel sphere of a deep sea submersible is manufactured of titanium plates that are welded together. On Mir, the personnel sphere is made of a maraging steel alloy that has ten percent better strength/weight ratio than titanium.[1] This alloy contains about 30% cobalt and smaller amounts of nickel, chrome and titanium. Two hemispheres were made by casting and machining, and then bolted together, thus avoiding welded joints. The resulting construction is close to the density of water, thus making it easier to move in different depths. Additional buoyancy is provided by 8 cubic metres (280 cu ft) of syntactic foam.[1] Unlike other Deep Submergence Vehicles that use iron ballast to reach the ocean floor, the buoyancy and depth is adjusted by ballast tanks.[1]

Production of the two Mir units was a prime example of Finnish-Soviet economic and technical co-operation during the Cold War. Bids from Canada, France and Sweden to construct the submarines had been retracted most likely due to political pressure. In a later interview with STT the then Rauma-Repola department head Peter Laxell said he believed that "Finland got the permit to deliver the crafts to the Soviets on the basis that the CoCom officials in the USA believed the project would be a failure . . . Once it became clear to them we actually had accomplished the engineering feat there was a huge uproar about how such technology could be sold to the Soviets, enough for many visits to the Pentagon.".[3]

Because of the CoCom restrictions, most of the technology used had to be developed in Finland. The electronics was developed by Hollming. The syntactic foam was produced in Finland by Exel Oyj, as 3M, the leading producer, refused to supply their product.[1] The construction, including casting, was done by Lokomo (a Rauma-Repola subsidiary) in Tampere, Finland.

The level of technology flowing into the Soviet Union raised concern in the USA and Rauma-Repola was privately threatened with economic sanctions. For example, one concern of the Pentagon was the possibility that the Soviet Union would manufacture a pioneer submarine fleet that could clear the ocean floor of U.S. deep sea listening equipment.[1] With the possibility of losing its lucrative offshore oil platforms market Rauma-Repola yielded, and submarine development ceased in Finland. One project that was abandoned was the development of a fuel cell based air-independent propulsion system.

On August 2, 2007 Russia used the Mir submersibles to perform the first manned descent to the seabed under the Geographic North Pole, to a depth of 4,261 m, to scientifically research the region in relation to the 2001 Russian territorial claim. The Mir-1 crew: pilot Anatoly Sagalevich; polar explorer Arthur Chilingarov; and Vladimir Gruzdev. The MIR-2 crew were international: Russian pilot Yevgeny Chernyaev; Australian Mike McDowell; Swede Frederik Paulsen.[5]

On the seabed Mir-1 planted a one meter tall rustproof Flag of Russia, made of titanium alloy at OKB "Fakel" in Kaliningrad,[6] and left a time capsule, containing a message for future generations and a flag of United Russia.[7] "If a hundred or a thousand years from now someones goes down to where we were, they will see the Russian flag there," said Chilingarov [8] Soil and water samples of the seabed were taken during the mission.[6] International scepticism regarding the Russian mission was put forward by Peter MacKay, Canada's foreign minister, and Tom Casey, deputy spokesman of the US State Department, who argued that Russian claim of the Arctic has no legal standing.[8]

A short time after announcement of the polar expedition, some newspapers tried to stir up controversy by claiming the expedition was fake because some of the footage was from James Cameron's movie Titanic. In fact, a Russian television network had used the Titanic footage (for which it holds the copyright) as an illustration of the deep-sea vessels in action. They had shown this hours before the Mir submersibles had arrived on the Arctic seabed, and they had specifically pointed out that the footage was from the movie, not a transmission from the site. Reuters did not note this information when it carried the story, and used the pictures wrongly captioned. Reuters later apologized and issued a statement reading in part: Reuters mistakenly identified this file footage as originating from the Arctic, and not the North Atlantic where the footage was shot, and they reposted the story with correct captions.[9][10]

In July 2008 both Mir submersibles began a two-year expedition to Lake Baikal, the world's largest freshwater reservoir. The expedition is being led by the Russian Academy of Sciences.[11] During the expedition around 160 descents are planned to the bottom of the lake, which is largely unexplored to this point. On the descent that occurred on August 1, Russian Prime Minister Putin accompanied the dive in the southern portion of the lake.[12] 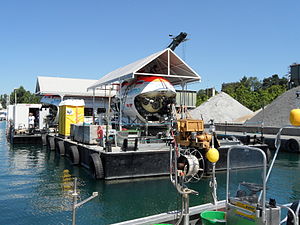 In summer 2011, both submersibles part of a scientific exploration program in Lake Geneva called elemo (exploration des eaux lémaniques), in which researchers conducted studies in areas such as bacteriology and micropollutants, as well as exploring Lake Geneva's geology and physics.[13] The submersibles arrived on Lake Geneva in May 2011.[14]