From Infogalactic: the planetary knowledge core
(Redirected from MKAD)
Jump to: navigation, search
For road in Minsk, see MKAD (Minsk).

The Moscow Automobile Ring Road (Russian: Московская Кольцевая Автомобильная Дорога, Moskovskaya Koltsevaya Avtomobilnaya Doroga), or MKAD (МКАД), is a ring road encircling the parts of the City of Moscow, the capital of Russia. The length of the road is 108.9 km, and the number of exits is 35 (including 10 interchanges). 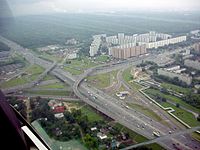 The growth of traffic in and around Moscow in the 1950s made the city planners realise Russia's largest metropolis needed a bypass to redirect incoming traffic from major roads that run through the city. Opened in 1961, the MKAD had four lanes of asphalt running 108.9 kilometres along the city borders. Although not yet a freeway, it featured interchanges at major junctions, very few traffic lights and a speed limit of 100 km/h (62 mph).

For a long time the MKAD served as the administrative boundary of Moscow city, until in the 1980s Moscow started annexing territory outside the beltway. In December 2002 Bulvar Dmitriya Donskogo became the first Moscow Metro station that opened beyond the limits of MKAD.[2]

In 1995-1999 the road was widened from the initial four to ten lanes, while all intersections became grade-separated, bridges were built to accommodate pedestrians, traffic lights were removed, and a solid concrete barrier was installed in the median. In 2001 all slow-moving vehicles were banned from entering the MKAD and the renovated road received a freeway designation from the mayor's office.