In the 1970s, the Soviet Central Auto and Tractor Directorate began a development program to replace the AT-P series of artillery tractors (which were based on the ASU-57 airborne self-propelled gun) with a new generation of vehicles. The MT-L was developed to meet this requirement based on the PT-76 amphibious light tank chassis. The MT-LB is the armoured variant of the MT-L. Entering production in the early 1970s, it was cheap to build, being based on many existing components, e.g. the engine, which was originally developed for trucks. It is built at the Kharkiv Tractor Plant[1] and under license in Poland by Huta Stalowa Wola[2] and Bulgaria.

The crew, a driver and a commander/gunner sit in a compartment at the front of the vehicle, with the engine behind them. A compartment at the rear enables up to 11 infantry to be carried or a cargo of up to 2,000 kg. A load of 6,500 kg can be towed. The vehicle is fully amphibious, being propelled by its tracks in the water.

A small turret at the front of the vehicle fits a 7.62 mm PKT machine gun with 360 degree manual traverse and an elevation of -5 to +30 degrees. The vehicle is lightly armoured against small arms and shell splinters with a thickness of 3 to 10 mm of steel. The infantry compartment has two hatches over the top, which open forwards. There are four firing ports - one in either side of the hull, the other two in the rear twin doors of the infantry compartment.

The driver is provided with a TVN-2 infra-red periscope, which in combination with the OU-3GK infra-red/white light search light provides a range of about 40 m. All vehicles include an NBC system. 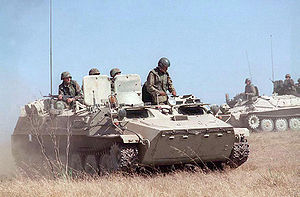 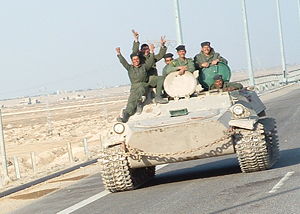 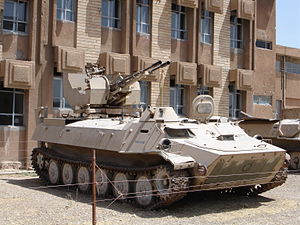 Iraqi MT-LB converted into a SPAAG armed with a ZU-23-2 anti-aircraft gun. 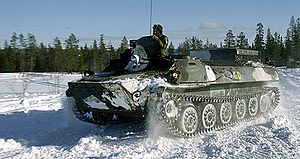 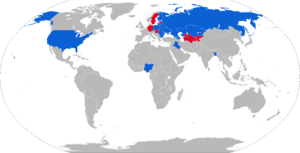 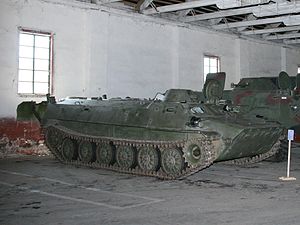 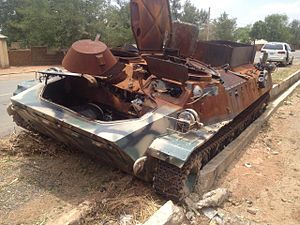 MT-LB of the Nigerian Army, captured by Boko Haram, destroyed during military operations in March 2015. Near Marrabara, Adamawa State, May 2015