The Zschopau works was one of the oldest motorcycle factories in the world, producing motorcycles since 1922. They were the first company to develop the two-stroke engine for vehicles and were the leader in two-stroke development worldwide. Rasmussen had begun the motorcycle production under the brand name DKW. Later he also started the car company DKW cars. In the world economic crises of 1929, four local car manufacturers under the leadership of Rasmussen's DKW founded Auto Union, nowadays known as Audi AG car manufacturer. The best known models from Zschopau later were the two-stroke 125/150 and 250 series, with the variants ES, ETS, TS and ETZ. In the 1950s, MZ was the world leader in two-stroke engines. Especially through the work of their racing engineer and department leader Walter Kaaden their engines became nearly unbeatable and in 1961 they nearly won the world championships in the 125 cc class against Soichiro Honda's four-stroke engines. The championship was lost through one of the biggest spy scandals in motorcycle history. The factory rider Ernst Degner fled from East Germany and brought all their knowledge to Suzuki. Walter Kaaden's secret was stolen. He had developed the two-stroke exhaust pipe, known as expansion chamber. In 1962, with his stolen knowledge that he brought to Suzuki he won the first world title for the Japanese manufacturer. The British author Mat Oxley wrote a book about this scandal: Stealing Speed. Later MZ was one of the few producers that made motorcycles with sidecars, though prior to 1972 sidecars were manufactured by Stoye. A later version named the MuZ Voyager was an Austrian 500 cc, four-valve, rotax-equipped, retro-styled standard, custom-painted to match the model #562 sidecar made by Velorex of Czechoslovakia. However, a cease and desist order was issued in the early 1990s by Kawasaki, who owned the rights to that name, and MuZ subsequently renamed the motorcycle the Silverstar, and the sidecar-equipped version the Silverstar Gespann. Only after Hong Leong Group took over the lead of MZ Motorrad und Zweiradwerke GmbH the funding was secured to invest in the development of new engines and motorcycles. They developed with the German MZ engineers the models MZ 1000s and MZ RT 125 (with a four-stroke engine) and as a successor model to one of the most famous and copied motorcycle models in the world, the MZ RT125.

The East German government did not support the international racing aspirations of MZ. The defection to the West of grand prix rider Ernst Degner, complete with his theft of a set of secrets, started the end of the glory years of Kaadens bikes.

The Yamaha-based engine can be reliably tuned to 150 percent of its original performance. At that stage, it can become competitive in Supermono racing classes and in single and twin-cylinder racing classes. 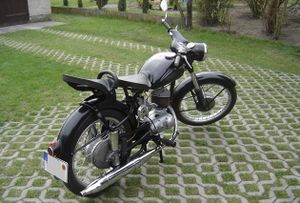 Back in the early 80’s in the UK, MZ were regarded by the motorcycle press as producing ugly and old-fashioned (if worthy) motorcycles. The then importer, Wilf Green, decided to try and update the image of the bikes by producing his own modified versions of the TS125, christened the “Pathfinder” and the “Sport”. Both bikes were, in essence, standard TS125 deluxe models with remodelled fuel tanks and a remodelled, shortened GRP rear mudguard. The Sport also had a re-sculpted seat whereas the Pathfinder was transformed into a budget trial bike with the addition of knobbly tyres, high level front mudguard, motocross bars, high level exhaust and remodelled airbox. Neither bike was produced in great numbers.

Wilf Green subsequently created the ETZ300 (as distinct from the later, factory produced ETZ301), which was essentially a standard ETZ250 with a re-bored (and slightly restyled) engine, cockpit fairing and revised decals. Shortly after releasing this bike, however, Wilf Green lost the MZ import franchise meaning an end to importer-modified special editions in the UK.

MZ manufactured a line of 125 cc four-stroke motorcycles using an engine that was designed in-house. The MZ 125 produces 15 bhp (11 kW) and nearly 10 lb·ft (14 N·m) of torque. It is a liquid-cooled, dual-overhead-cam design with four valves, high-voltage electronic ignition and an 11,000 rpm ignition cut-off. This engine was used in four models, all of which share a common frame. The frame is a tube-steel backbone with the engine as a stressed bottom member. Differences in the suspension, fascia, gearing, and equipment make the four models relatively distinct, despite the shared platform. All four bikes feature a six-speed transmission and dual disc brakes.

The last new MZ model was the 1000S which featured a novel 1000 cc, DOHC parallel twin designed and built by MZ. The 1000S is a sport-tourer by design. The 1000S' unique engine is exceptionally compact for its displacement. The range includes a naked (unfaired) version and a full tourer with luggage, higher handlebars, and lower footpegs for comfort. Both of these are retuned, with less outright horsepower than the 'S', but with more torque.

Besides scooters, MZ also produced its own line of underbone motorcycles, targeted for the Southeast Asian market. Their debut underbone model was the MZ Perintis 120, launched in 2002. The Perintis was succeeded by the MZ Mantizz series, launched in 2004 – the design of which is based on their flagship 1000S model.[12] The Mantizz series has two displacement options – 125 cc and 110 cc. All MZ underbone models are powered by four-stroke engines and are manufactured in MZ's Malaysian plant in Shah Alam.

MZ also competed in the European GP-500 class with race-only models, and built several scooter and ATV models ranging in displacement from 50 cc to 185 cc, as well as the Charlie electric scooter, the fastest stand-up electric scooter produced.

As of January 2010 only the Charlie electric scooter, is in production and the company is under new owners.