From Infogalactic: the planetary knowledge core
Jump to: navigation, search
Not to be confused with Maastrichtian Dutch or a Maastrichtian accent, the accent/regional variety of Standard Dutch spoken in Maastricht.
For other uses, see Maastrichtian (disambiguation).

Maastrichtian (Limburgish: Mestreechs [məˈstʀeːxs]) or Maastrichtian Limburgish (Limburgish: Mestreechs-Limburgs [məˈstʀeːxsˈlimbœʀxs]) is the city dialect and variant of Limburgish spoken in the Dutch city of Maastricht alongside the Dutch language (with which it is not mutually intelligible). In terms of speakers it is the most widespread variant of Limburgish, and is a tonal one. Like many of the Limburgish dialects spoken in neighbouring Belgian Limburg,[2] Maastrichtian kept a lot of Gallo-Romance (or more accurately, French and Walloon) influences in its vocabulary.[3] This Francophone influence can additionally be attributed to the historical importance of French with the cultural elite and educational systems as well as the historical immigration of Walloon labourers to the city.[citation needed] Despite being a specific variant of Limburgish, Maastrichtian remains mutually intelligible with other Limburgish variants, especially the ones of surrounding municipalities.

Whilst Maastrichtian is still widely spoken, regardless of social level, research has shown that it is suffering from a degree of dialect loss amongst younger generations. This is the case in dwindling of speakers but also in development of the dialect (dialect levelling) towards Standard Dutch (e.g. the loss of local words and grammar).[1]

A particular feature of Maastrichtian is that it gives its speakers a certain prestige.[5] Research of the dialect showed that people talking the "purest" form of Maastrichtian, i.e. the Short Maastrichtian (Kort Mestreechs) sociolect, were perceived by others to be the well-educated ones.

In 1999, the municipal government recognised a standardised spelling of Maastrichtian made by Pol Brounts and Phil Dumoulin as the official spelling of the dialect.[4]

Other literature on Maastrichtian

In 2002, the municipal government officially adopted a local anthem (Mestreechs Volksleed) composed of lyrics in Maastrichtian. The theme had originally been written by Alfons Olterdissen (1865–1923) as finishing stanza of the Maastrichtian opera "Trijn de Begijn" of 1910.[6]

The phonology of the Maastrichtian dialect, especially with regards to vowels is quite extensive due to the dialect's tonal nature. 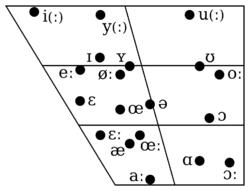 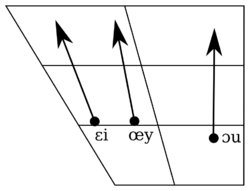 Diphthongs of the Maastrichtian dialect, from Gussenhoven & Aarts (1999:159)

For an extended overview of Maastrichtian words, see this Wiktionary Category.

Maastrichtian contains many specific words ample or not used in other Limburgish dialects some being creolisations/"limburgisations" of Dutch, French and German words while others cannot be directly subscribed to one of these languages.

(Historical) Vocabulary influences from other languages

Maastrichtian vocabulary, as the language family it belongs to suggests, is based on the Germanic languages (apart from the Limburgish language family this also includes varying degrees of influence from both archaic and modern Dutch and German). However, what sets Maastrichtian apart from other variants of Limburgish is its relatively strong influences from French. This is not only because of geographic closeness of a Francophone region (namely Wallonia) to Maastricht but also because of French being the predominant spoken language of the Maastrichtian cultural elite and the higher secondary educational system of the region in the past. Some examples:

For an extended list of French-derived (Maastrichtian-) Limburgish words, see this Wiktionary Category.

For an extended list of German-derived (Maastrichtian-) Limburgish words, see this Wiktionary Category.

Other examples of Maastrichtian vocabulary

Some examples of specific Maastrichtian vocabulary:

Some examples of Maastrichtian expressions: