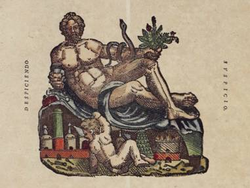 By looking down, I see up. Part of a pair of illustrations in Tycho Brahe's Astronomiæ instauratæ Mechanica depicting his understanding of the connection between macrocosm and microcosm. 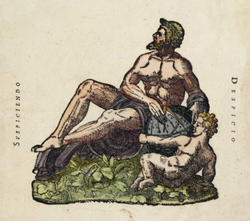 By looking up, I see down.

Macrocosm and microcosm is an ancient Greek Neo-Platonic schema of seeing the same patterns reproduced in all levels of the cosmos, from the largest scale (macrocosm or universe-level) all the way down to the smallest scale (microcosm or sub-sub-atomic or even metaphysical-level). In the system the midpoint is Man, who summarizes the cosmos.

Macrocosm/microcosm is a Greek compound of μακρο- macro- and μικρο- micro-, which are Greek respectively for "large" and "small", and the word κόσμος kósmos which means "order" as well as "world" or "ordered world."

Today, the concept of microcosm has been dominated by sociology to mean a small group of individuals whose behavior is typical of a larger social body encompassing it. A microcosm can be seen as a special kind of epitome. Conversely, a macrocosm is a social body made of smaller compounds. In physics, scale invariance describes the same phenomenon, although the universe as a whole is not physically scale invariant according to the modern understanding. However, scale invariance does appear in some physical systems, such as electrical breakdown.