From Infogalactic: the planetary knowledge core
Jump to: navigation, search
For other uses, see Maelstrom (disambiguation). 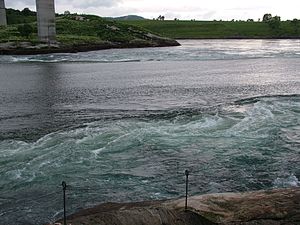 A maelstrom (/ˈmeɪlstrɒm/ or /ˈmeɪlstrəm/) is a very powerful whirlpool; a large, swirling body of water. A free vortex, it has considerable downdraft. The power of tidal whirlpools tends to be exaggerated by laymen.[1] There are few stories of large ships ever being sucked into a maelstrom, although smaller craft are in danger.[2] Despite this, tsunami or sinkhole-generated maelstroms may even threaten larger craft. Tales like those by Paul the Deacon, Edgar Allan Poe, and Jules Verne are entirely fictional.[3]

One of the earliest uses in English of the Scandinavian word (malström or malstrøm) was by Edgar Allan Poe in his story "A Descent into the Maelström" (1841). In turn, the Nordic word is derived from the Dutch maelstrom, modern spelling maalstroom, from malen (to grind) and stroom (stream), to form the meaning grinding current or literally "mill-stream", in the sense of milling (grinding) grain.[4] 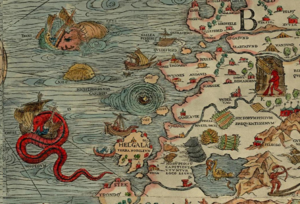 The maelstrom off Norway, as illustrated by Olaus Magnus on the Carta Marina, 1539.

The original Maelstrom (described by Poe and others) is the Moskstraumen, a powerful tidal current in the Lofoten Islands off the Norwegian coast.[5] The Maelstrom is formed by the conjunction of the strong currents that cross the straits (Moskenstraumen) between the islands and the great amplitude of the tides.

In Norwegian, the most frequently used name is Moskenesstraumen (current of [island] Mosken).

The fictional depictions of the Maelstrom by Edgar Allan Poe and Jules Verne describe it as a gigantic circular vortex that reaches the bottom of the ocean, when in fact it is a set of currents and crosscurrents with a rate of 18 km/h.[6]

The maelstrom of Saltstraumen is the world's strongest maelstrom and is located 10 kilometres (6 mi) south-east of the city of Bodø, Norway. Its impressive strength is caused by the world's strongest tide occurring in the same location. A narrow channel connects the outer Saltfjord with its extension, the large Skjerstadfjord, causing a colossal tide which in turn produces the Saltstraumen maelstrom.

The Corryvreckan is the third largest whirlpool in the world, and is on the northern side of the Gulf of Corryvreckan, between the islands of Jura and Scarba off the coast of mainland Scotland. Flood tides and inflow from the Firth of Lorne to the west can drive the waters of Corryvreckan to waves of over 9 metres, and the roar of the resulting maelstrom can be heard 16 kilometres away.

A documentary team from Scottish independent producers Northlight Productions once threw a mannequin into the Corryvreckan ("the Hag") with a life jacket and depth gauge. The mannequin was swallowed and spat up far down current with a depth gauge reading of 262 metres with evidence of being dragged along the bottom for a great distance.[7]

Other notable maelstroms and whirlpools

Naruto whirlpool is located in the Naruto Strait near Awaji Island in Japan.

Skookumchuck Narrows is a tidal rapids that develops whirlpools, on the Sunshine Coast (British Columbia), Canada.

French Pass (Te Aumiti) is a narrow and treacherous stretch of water that separates D'Urville Island from the north end of the South Island of New Zealand.

Tsunami and sinkhole-generated maelstroms and whirlpools

Tsunamis generated by large earthquakes have historically formed ephemeral whirlpools at points along the area of wave impact, dependent upon submarine topography.[8] Most notably, the tsunami from the 2011 Tohoku earthquake created a maelstrom off Oarai, Ibaraki Prefecture, which was videotaped during news coverage and has become a viral video.[9]

Lake Peigneur is located in the U.S. State of Louisiana 1.2 miles (1.9 km) north of Delcambre and 9.1 miles (14.6 km) west of New Iberia, near the northernmost tip of Vermilion Bay. On November 20, 1980 a drilling disaster took place and the lake temporarily drained into a large sinkhole. The resultant whirlpool sucked in the drilling platform, eleven barges, many trees and 65 acres (260,000 m2) of the surrounding terrain.[10]

In literature and popular culture

Three of the most notable literary references to the Lofoten Maelstrom date from the nineteenth century. The first is the Edgar Allan Poe story "A Descent into the Maelström" (1841). The second is 20,000 Leagues Under the Sea (1870), the famous novel by Jules Verne. At the end of this novel, Captain Nemo seems to commit suicide, sending his Nautilus submarine into the Maelstrom (although in Verne's sequel Nemo and Nautilus survived). The "Norway maelstrom" is also mentioned in Herman Melville's Moby-Dick.[11]

English Australian Composer Julian Cochran wrote the piano work 'Maelstrom' in which the growing whirlpool is depicted by pianistic swirling effects and a sense of foreboding before the entire piano keyboard is eventually engulfed by the increasing waves.

Greek poet Homer describes a maelstrom in his "Odyssey" as Odysseus must choose to sail near the six-headed monster Scylla, or near the whirlpool Charybdis in order to reach Ithaca.

The main characters, Edward and Elizabeth, in Giacomo Casanova's 1788 novel "Icosameron" are sucked into a maelstrom which acts as a portal to the Protocosmos.

In Warhammer 40,000 'the Maelstrom' refers to an unstable region of the Milky-Way galaxy, known as a 'Warp Storm', where real-space and the Warp bleed into one another.

In the Disney film Pirates of the Caribbean: At World's End, the freed sea goddess Calypso causes a gigantic maelstrom that the Flying Dutchman and the Black Pearl have to navigate in order to position themselves to fire on each other.

In Star Trek II: The Wrath of Khan, main antagonist Khan Noonien Singh ad-libs Moby Dick in his justification of his pursuit of James T. Kirk. "He tasks me. He tasks me, and I shall have him! I'll chase him round the Moons of Nibia and round the Antares Maelstrom and round Perdition's flames before I give him up!"

In Adomnan of Iona's 'Life of St Columba', the saint supposedly has miraculous knowledge of a particular bishop who ran into a whirlpool between Ireland and Scotland. In Adomnan's narrative, he quotes Columba saying