From Infogalactic: the planetary knowledge core
Jump to: navigation, search
This article is about the historical Kingdom of Magadha. For the kingdom of Magadha in Indian epic literature, see Magadha Kingdom.

Magadha formed one of the sixteen Mahajanapadas (Sanskrit: "Great Countries") of ancient India. The core of the kingdom was the area of Bihar south of the Ganges; its first capital was Rajagriha (modern Rajgir), then Pataliputra (modern Patna). Rajagriha was initially known as 'Girivrijja' and later came to be known as so during the reign of Ajatashatru. Magadha expanded to include most of Bihar and Bengal with the conquest of Licchavi and Anga, respectively,[1] followed by much of eastern Uttar Pradesh and Odisha. The ancient kingdom of Magadha is heavily mentioned in Jain and Buddhist texts. It is also mentioned in the Ramayana, the Mahabharata and the Puranas. A state of Magadha, possibly a tribal kingdom, is recorded in Vedic texts much earlier in time than 600 BC.

The earliest reference to the Magadha people occurs in the Atharvaveda, where they are found listed along with the Angas, Gandharis and Mujavats. Magadha played an important role in the development of Jainism and Buddhism, and two of India's greatest empires, the Mauryan Empire and Gupta Empire, originated in Magadha. These empires saw advancements in ancient India's science, mathematics, astronomy, religion, and philosophy and were considered the Golden Age of India. The Magadha kingdom included republican communities such as the community of Rajakumara. Villages had their own assemblies under their local chiefs called Gramakas. Their administrations were divided into executive, judicial, and military functions.

The kingdom of the Magadha roughly corresponds to the modern districts of Patna, Jehanabad, Nalanda, Aurangabad, Nawadah and Gaya in southern Bihar, and parts of Bengal in the east. It was bounded on the north by the river Ganges, on the east by the river Champa, on the south by the Vindhya Range, and on the west by the Son River. This region of Greater Magadha had a culture and religious beliefs of its own that predates Hinduism. Much of the second urbanisation took place here from c. 500 BC onwards and it was here that Jainism became strong and Buddhism arose. The importance of Magadha's culture can be seen in that Buddhism, Jainism and Hinduism adopted some of its features, most significantly a belief in rebirth and karmic retribution.[2] 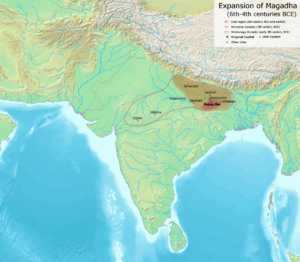 The Magadha state c. 600 BC, before it expanded from it's capital Rajagriha.

There is little certain information available on the early rulers of Magadha. The most important sources are the Buddhist Pāli Canon, the Jain Agamas and the Hindu Puranas. Based on these sources, it appears that Magadha was ruled by the Haryanka dynasty for some 200 years, c. 600 BC – 413 BC.

Gautama Buddha, the founder of Buddhism, lived much of his life in Magadha kingdom. He attained enlightenment in Bodh Gaya, gave his first sermon in Sarnath and the first Buddhist council was held in Rajgriha.[3]

The Hindu Mahabharata calls Brihadratha the first ruler of Magadha. The second book of the Hindu Mahabharata, the Sabha Parva. As the scene of many incidents in his life, including his enlightenment, Magadha is often considered a blessed land. King Bimbisara of the Haryanka dynasty led an active and expansive policy, conquering Anga in what is now West Bengal.

The death of King Bimbisara was at the hands of his son, Prince Ajatashatru. King Pasenadi, king of neighbouring Kosala and brother-in-law of King Bimbisara, promptly retook the gift of the Kashi province. war broke out between Ajatashatru and prasenjit with varying results in favour of both. conflict ended with ajatashatru marrying prasenjit's daughter Vajjira and kasi was again given in dowry to magadha.

Accounts differ slightly as to the cause of King Ajatashatru's war with the Licchavi, an area north of the river Ganges. It appears that Ajatashatru sent a minister to the area who for three years worked to undermine the unity of the Licchavis. To launch his attack across the Ganges River, Ajatashatru built a fort at the town of Pataliputra. Torn by disagreements the Licchavis fought with Ajatashatru. It took fifteen years for Ajatashatru to defeat them. Jain texts tell how Ajatashatru used two new weapons: a catapult, and a covered chariot with swinging mace that has been compared to a modern tank. Pataliputra began to grow as a center of commerce and became the capital of Magadha after Ajatashatru's death.

The Haryanka dynasty was overthrown by the Shishunaga dynasty. The last Shishunaga ruler, Kalasoka, was assassinated by Mahapadma Nanda in 345 BC, the first of the so-called Nine Nandas, Mahapadma and his eight sons.

In 326 BC, the army of Alexander approached the western boundaries of Magadha. The army, exhausted and frightened at the prospect of facing another giant Indian army at the Ganges, mutinied at the Hyphasis (the modern Beas River) and refused to march further East. Alexander, after the meeting with his officer, Coenus, was persuaded that it was better to return and turned south, conquering his way down the Indus to the Ocean.

Around 321 BC, the Nanda Dynasty ended and Chandragupta Maurya became the first king of the great Mauryan dynasty and Mauryan Empire with the help of Chanakya. The Empire later extended over most of South Asia under King Ashoka, who was at first known as 'Ashoka the Cruel' but later became a disciple of Buddhism and became known as 'Dharma Ashoka'. Later, the Mauryan Empire ended, as did the Shunga and Khārabēḷa empires, to be replaced by the Gupta Empire. The capital of the Gupta Empire remained Pataliputra in Magadha. 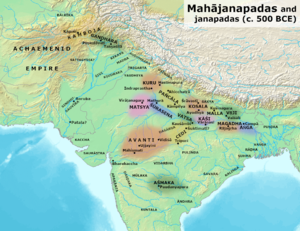 Map of sixteen Mahajanapadas (Sanskrit: "Great Countries") during 500.BC.