In Argentina, the Master of Science or Magister (Mg, Ma, Mag, MSc) is a postgraduate degree of two to four years of duration by depending on each university's statutes.[1] The admission to a Master program (Spanish: Maestría) in an Argentine University requires the full completion of an undergraduate degree, as well Licentiate's degree as Professorate degree of four to five years long from any recognized university. Under the accomplishment of the Magister Scietiæ thesis dissertation, that in years of formal education, is generally equivalent to a Ph.D. or Doctorate in universities of North America or Europe given the Bologna comparison system among academic programs.

In Egypt, Magister degree is a postgraduate degree which is awarded after three to 6 years duration. It is equivalent to MSc degree. It is a prerequisite to have an MSc before applying to a Ph.D. or Doctorate degrees.

In Austria, Bulgaria, the Czech Republic, Germany, Ukraine, Latvia, Lithuania and Slovakia, obtaining the Magister requires at least five years of study including coursework and a final thesis, similar to a Diplom degree. Magisters tend to be awarded in the humanities and the social sciences, while Diplomas dominate in the natural sciences and in engineering.

In Austria, major universities began to partition the Mag.Phil. coursework into a four-year bachelor's and two-year master's program. This move is an attempt to standardize requirements with other EU countries as part of the Bologna process, and would give students the option to exit with a Bachelor of Arts (B.A.) degree after four years, or continue with additional coursework towards a Mag.Phil. (master's) degree, typically a two-year program.

In Poland magister (abbreviation: mgr or mgr inż. - in technical disciplines) is awarded after 5 years of University level education and it is an equivalent to Master of Arts, Master of Science, Master of Laws, Master of Music in an academic discipline. Before +/-1999 and the implementation of the Bologna Process the first academic degree awarded in Poland was magister (i.e. M.A., M.Sc., LL.M). After implementation of the Bologna Process the person who obtained Bachelor of Arts or Bachelor of Science can continue education to the magister level (it requires additional 2 years of studies).

With the implementation of the Bologna Process, curricula leading to Magister degrees have been phased out in many countries.

Since 2007 in Sweden, the Magister is a one-year graduate degree which requires at least three years of undergraduate studies. It is officially translated into either Master of Arts, Master of Social Science or Master of Science depending on the subject.[10]

In Sweden, magister (filosofie magister) historically was the highest degree at the faculties of philosophy and was equivalent to the doctorate used in theology, law and medicine. The degree was abolished in 1863, and replaced with the Doctor of Philosophy. The magister degrees used in Denmark and Norway most closely resemble this degree.

This masters degree traditionally taken as a first degree before the Bologna Process. The degree usually lasted about 5–6 years and is structured into Basic, Intermediate, and Advanced progressional components. A new undergraduate magister degree, requiring at least 4 years of studies, was introduced in 1993. Since the introduction of the Bologna Process in 2005, the Magister has been broken into bachelor (formerly Basic/Intermediate) and master (formerly Advanced) components. However, the vast majority of students continue right through to complete the master degree and, in effect, the duration and extent of the old Magister degree remains much as it was. 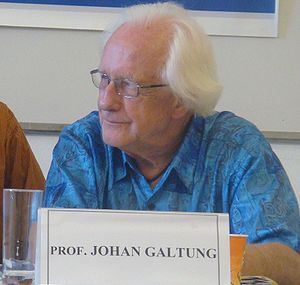 Johan Galtung, the principal founder of the discipline of peace and conflict studies, holds a mag.art. degree as his highest degree, translated into English as a PhD

In Denmark and Norway, the Magister's degree was an advanced research degree, corresponding to the PhD in the Anglo-Saxon system and usually translated as a PhD in an English language context.

Together with the licentiate's degree is one of two formal predecessors of the current PhD degrees in Denmark, whereas in Norway, it is one of many predecessors of the current PhD degrees introduced in 2003. In modern times, the Magister's degree typically required 7–8 years of studies, with strong emphasis on the scientific dissertation. In Norway the Magister's degree eventually had a formal standardized scope of 3 years of study (following a cand.mag. or equivalent) and required an independent scientific work with a dissertation workload corresponding to three years of full-time research and dissertation work; hence it was a research-only degree. The dissertation was evaluated by a committee and the candidate also had to deliver a trial lecture to demonstrate his or her suitability for academic positions at university-level. The Magister's degree became increasingly rare from the 1970s, and as a result of Denmark and Norway implementing the Bologna Process, it has now been completely abolished and replaced by PhD degrees. In Norway, the formal requirements for equivalence with the modern PhD are "a standardized scope of at least 3 years of study" and "an independent scientific work" with a thesis workload corresponding to "at least two years of standardized full time study," which is one year less than the requirements for the Magister's degree.[11]

Two main forms of the Magister's degree existed: Mag. art. (abbreviation of the Latin Magister Artium, "teacher of the arts"), if the degree was earned in humanities or social sciences, and mag. scient. for Natural Science. In Denmark, there was also a third degree in sociology, mag. scient. soc. The mag. scient. degree was discontinued in the 1970s and the mag. art. degree programs in Denmark ceased immatriculating students in 2007, but the degree was rarely used since the 1990s. In Norway it was abolished some years earlier, having become an increasingly rare, but highly regarded, degree, especially after the 1970s.

The degree was introduced in Denmark-Norway in 1479, as the highest degree at the Faculty of Philosophy, and was equivalent to the doctoral degrees in Theology, Law and Medicine. It was replaced by the Doctor Philosophiae degree as the highest degree at the Faculty of Philosophy in both countries in 1824. In 1848, the Magister's degree was reintroduced in Denmark, as a degree above the Candidate's degree, formally equal to the Licentiate's degrees at the other faculties. The new Magister's degree was originally formally known as Magisterkonferens, "Magister Counselor". The program was designed to be preparation for finding employment as a researcher. Sometimes the degree was obtained after the Candidate's degree had been obtained. The Magister's degrees, directly based on the Danish ones, were introduced in Norway in the early 1920s. In 1955, the Licentiate's degrees were also introduced at the University of Oslo Faculty of Law, and were occasionally awarded until 2003.

A Norwegian Magister's degree required a 3-year scientific dissertation of high quality, and is considered "approximately equivalent to an American Ph.D."[12] Also in Denmark the Magister's degree is considered a degree at the same level as a PhD.[13][14] By comparison, in both Norway and Denmark, a PhD degree today only requires a 2,5-year dissertation. The Danish and Norwegian PhD degrees are identical, but in Denmark, the PhD is not considered a doctorate, as is established by law.

The Danish and Norwegian Magister's degree should not be confused with the cand.mag. (candidatus magisterii), which corresponds to an American Master of Arts.

In Slovenia, Bosnia and Herzegovina, Serbia, Croatia, Macedonia and other countries once part of Yugoslavia, before the implementation of the Bologna process, the magistar nauka/magister znanosti (Magister of Science) was a research-oriented degree awarded for 2 or 3 years of study following the diploma degree (which lasted 4 to 6 years) and the defense of a magistarski rad (magister's thesis).[16][17] In order to be promoted to doktor nauka/znanosti (Doctor of Science), a magistar was supposed to write and defend a doctoral thesis. Magistar um(j)etnosti (Magister of Arts) was a terminal degree in music performance, acting and visual arts.

In Serbia, by decision of the Serbian Parliament (Odredba stava 2.), the status of those graduated before the Bologna process is now equivalent with Masters Degree graduates in the EU.[18] Magister's degree has been considered as equivalent of the first two years of three years doctoral studies. In Croatia, the statuses are regulated by a new law from 2007[19] and a new classification from 2008.[20]

Entering 'Magistar" studies was a highly selective process. Only students with high GPA were eligible for studies of this kind. Mostly, those were preselected students who were employed at Universities.

This kind of degree entitles one to be considered as PhD candidate. He or she can immediately start working on a dissertation. The person with this kind of degree completed overall 4 + 3 years of education (humanities, science etc.) or 5 + 3 (engineering) years of education after high school. Two years were related to the coursework only. After two years of coursework and research, the thesis was completed in a year or two after the coursework, although it roughly depended on a workload of an average graduate student who is considered to be a faculty member with teaching responsibilities (which can be up to 16 hours per week of a teaching load).

After the Bologna process, previous undergraduate education has been reformed. Current students that are in a 3- or 4-year Bachelor program and 1–2 Master program have to complete PhD requirements before writing their dissertation. They have to complete the coursework and pass preliminary exams. Students with Magistar degree have no such requirements. They have to do the research only related to the dissertation. Some universities which retained the Magistar (e.g. University of Zagreb) use it as a pre-postgraduate studies qualification.[21]

In France, a magistère is a highly selective three-year course. To enter the course, the student is required to obtain top-level grades at his Diplôme d'études universitaires générales (two-year first university degree). However, due to the Bologna process, most of the magistères are substituted by master's degrees.

The most prestigious French universities still offer "magistères" in Law, Economics, or Sciences, which are open to the highest-ranked students at the end of the first two years of studies.

After the Bologna Process the second cycle degree in Italy is the Laurea Magistrale, i.e. a Magister degree. It is a postgraduate two-year degree, equivalent to a master's degree.

In some fields (particularly, Law, Engineering and Architecture) the Laurea magistrale a ciclo unico is awarded. This is a five or six year second cycle (master's) degree, which does not require a previous first cycle degree for the admission.