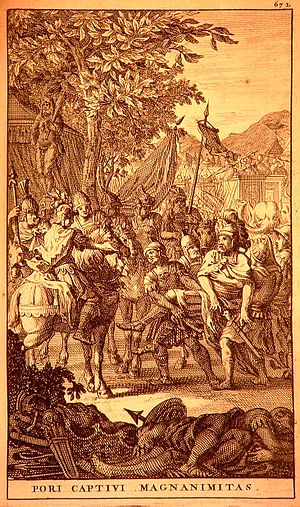 The magnanimity of Alexander towards the captive Porus.

Magnanimity (derived from the Latin roots magna, great, and animus, mind) is the virtue of being great of mind and heart. It encompasses, usually, a refusal to be petty, a willingness to face danger, and actions for noble purposes. Its antithesis is pusillanimity. Magnanimity is a latinization of the Greek word μεγαλοψυχία, megalopsychia which means greatness of soul and was identified by Aristotle as "the crowning virtue". Although the word magnanimity has a traditional connection to Aristotelian philosophy, it also has its own tradition in English which now causes some confusion.[1]

Noah Webster of the American Language defines Magnanimity as such:

MAGNANIMITY, n. [L. magnanimitas; magnus, great, and animus, mind.] Greatness of mind; that elevation or dignity of soul, which encounters danger and trouble with tranquility and firmness, which raises the possessor above revenge, and makes him delight in acts of benevolence, which makes him disdain injustice and meanness, and prompts him to sacrifice personal ease, interest and safety for the accomplishment of useful and noble objects.[2]

In his Nicomachean Ethics, Aristotle considered it the suitable virtue for a great man, arising from his other virtues.[3]

Edmund Spenser, in The Faerie Queene, had each knight allegorically represent a virtue; Prince Arthur represented "magnificence", which is generally taken to mean Aristotelian magnificence.[4][5] The uncompleted work does not include Prince Arthur's book, and the significance is not clear.

Democritus states that "magnanimity consists in enduring tactlessness with mildness".

As an adjective, the concept is expressed as "magnanimous", e.g. "He is a magnanimous man." An example of referring to one as magnanimous can be seen in Hrólfs saga kraka where King Hrólfr Kraki changes the name of a court servant from Hott to Hjalti for his new-found strength and courage, after which Hjalti refuses to taunt or kill those who previously mocked him. Because of his noble actions, the king then bestows the title Magnanimous upon Hjalti.

One form of magnanimity is the generosity of the victor to the defeated. For example, magnanimity has been codified between societies by the Geneva Conventions.

Magnanimous relief efforts can serve to offset the collateral damage of war.

C. S. Lewis, in his book The Abolition of Man, refers to the chest of man as the seat of magnanimity, or sentiment, with this magnanimity working as the liaison between visceral and cerebral man.[6] Lewis asserts that, in his time, the denial of the emotions that are found in the eternal and sublime -- that which is humbling as an objective reality -- had led to "men without chests".

Winston Churchill is famously quoted as saying "In War: Resolution. In Defeat: Defiance. In Victory: Magnanimity. In Peace: Goodwill."