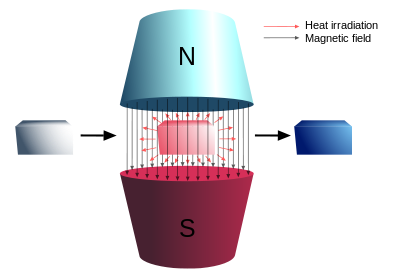 Gadolinium alloy heats up inside the magnetic field and loses thermal energy to the environment, so it exits the field cooler than when it entered.

Magnetic refrigeration is a cooling technology based on the magnetocaloric effect. This technique can be used to attain extremely low temperatures, as well as the ranges used in common refrigerators. Compared to traditional gas-compression refrigeration, magnetic refrigeration is safer, quieter, more compact, has a higher cooling efficiency, and is more environmentally friendly because it does not use harmful, ozone-depleting coolant gases.[1][2][3]

The effect was first observed by French physicist P. Weiss and Swiss physicist A. Piccard in 1917.[4] The fundamental principle was suggested by P. Debye (1926) and W. Giauque (1927).[5] The first working magnetic refrigerators were constructed by several groups beginning in 1933. Magnetic refrigeration was the first method developed for cooling below about 0.3K (a temperature attainable by 3
He refrigeration, that is pumping on the 3
He vapors).

The magnetocaloric effect (MCE, from magnet and calorie) is a magneto-thermodynamic phenomenon in which a temperature change of a suitable material is caused by exposing the material to a changing magnetic field. This is also known by low temperature physicists as adiabatic demagnetization. In that part of the refrigeration process, a decrease in the strength of an externally applied magnetic field allows the magnetic domains of a magnetocaloric material to become disoriented from the magnetic field by the agitating action of the thermal energy (phonons) present in the material. If the material is isolated so that no energy is allowed to (re)migrate into the material during this time, (i.e., an adiabatic process) the temperature drops as the domains absorb the thermal energy to perform their reorientation. The randomization of the domains occurs in a similar fashion to the randomization at the curie temperature of a ferromagnetic material, except that magnetic dipoles overcome a decreasing external magnetic field while energy remains constant, instead of magnetic domains being disrupted from internal ferromagnetism as energy is added.

One of the most notable examples of the magnetocaloric effect is in the chemical element gadolinium and some of its alloys. Gadolinium's temperature increases when it enters certain magnetic fields. When it leaves the magnetic field, the temperature drops. The effect is considerably stronger for the gadolinium alloy (Gd
5Si
2Ge
2).[6] Praseodymium alloyed with nickel (PrNi
5) has such a strong magnetocaloric effect that it has allowed scientists to approach to within one milliKelvin, one thousandth of a degree of absolute zero.[7]

The magnetocaloric effect can be quantified with the equation below:

where T is the temperature, H is the applied magnetic field, C is the heat capacity of the working magnet (refrigerant) and M is the magnetization of the refrigerant.

From the equation we can see that magnetocaloric effect can be enhanced by:

The cycle is performed as a refrigeration cycle that is analogous to the Carnot refrigeration cycle, but with increases and decreases in magnetic field strength instead of increases and decreases in pressure. It can be described at a starting point whereby the chosen working substance is introduced into a magnetic field, i.e., the magnetic flux density is increased. The working material is the refrigerant, and starts in thermal equilibrium with the refrigerated environment.

Once the refrigerant and refrigerated environment are in thermal equilibrium, the cycle can restart.

In the late 1990s Pecharksy and Gschneidner reported a magnetic entropy change in Gd
5(Si
2Ge
2) that was about 50% larger than that reported for Gd metal, which had the largest known magnetic entropy change at the time.[9] This giant magnetocaloric effect (GMCE) occurred at 270K, which is lower than that of Gd (294K).[3] Since the MCE occurs below room temperature these materials would not be suitable for refrigerators operating at room temperature.[10] Since then other alloys have also demonstrated the giant magnetocaloric effect. These include Gd
5(Si
xGe
1−x)
4, La(Fe
xSi
1−x)
13H
x and MnFeP
1−xAs
x alloys,.[8][10] Gadolinium and its alloys undergo second-order phase transitions that have no magnetic or thermal hysteresis.[11] However, the use of rare earth elements makes these materials very expensive.

Ni
2Mn-X (X = Ga, Co, In, Al, Sb) Heusler alloys are also promising candidates for magnetic cooling applications because they have Curie temperatures near room temperature and, depending on composition, can have martensitic phase transformations near room temperature.[2] These materials exhibit the magnetic shape memory effect and can also be used as actuators, energy harvesting devices, and sensors.[12] When the martensitic transformation temperature and the Curie temperature are the same (based on composition) the magnitude of the magnetic entropy change is the largest.[1] In February 2014, GE announced the development of a functional Ni-Mn-based magnetic refrigerator.[13][14]

The development of this technology is very material-dependent and will likely not replace vapor-compression refrigeration without significantly improved materials that are cheap, abundant, and exhibit much larger magnetocaloric effects over a larger range of temperatures. Such materials need to show significant temperature changes under a field of two tesla or less, so that permanent magnets can be used for the production of the magnetic field.[15][16]

The original proposed refrigerant was a paramagnetic salt, such as cerium magnesium nitrate. The active magnetic dipoles in this case are those of the electron shells of the paramagnetic atoms.

In a paramagnetic salt ADR, the heat sink is usually provided by a pumped 4
He (about 1.2 K) or 3
He (about 0.3 K) cryostat. An easily attainable 1 T magnetic field is generally required for initial magnetization. The minimum temperature attainable is determined by the self-magnetization tendencies of the refrigerant salt, but temperatures from 1 to 100 mK are accessible. Dilution refrigerators had for many years supplanted paramagnetic salt ADRs, but interest in space-based and simple to use lab-ADRs has remained, due to the complexity and unreliability of the dilution refrigerator

Eventually paramagnetic salts become either diamagnetic or ferromagnetic, limiting the lowest temperature that can be reached using this method.

One variant of adiabatic demagnetization that continues to find substantial research application is nuclear demagnetization refrigeration (NDR). NDR follows the same principles, but in this case the cooling power arises from the magnetic dipoles of the nuclei of the refrigerant atoms, rather than their electron configurations. Since these dipoles are of much smaller magnitude, they are less prone to self-alignment and have lower intrinsic minimum fields. This allows NDR to cool the nuclear spin system to very low temperatures, often 1 µK or below. Unfortunately, the small magnitudes of nuclear magnetic dipoles also makes them less inclined to align to external fields. Magnetic fields of 3 teslas or greater are often needed for the initial magnetization step of NDR.

In NDR systems, the initial heat sink must sit at very low temperatures (10–100 mK). This precooling is often provided by the mixing chamber of a dilution refrigerator or a paramagnetic salt.

On August 20, 2007, the Risø National Laboratory (Denmark) at the Technical University of Denmark, claimed to have reached a milestone in their magnetic cooling research when they reported a temperature span of 8.7 K.[18] They hope to introduce the first commercial applications of the technology by 2010.

As of 2013 this technology had proven commercially viable only for ultra-low temperature cryogenic applications available for decades. Magnetocaloric refrigeration systems are composed of pumps, motors, secondary fluids, heat exchangers of different types, magnets and magnetic materials. These processes are greatly affected by irreversibilities and should be adequately considered. At year-end, Cooltech Applications[19] announced that its first commercial refrigeration equipment would enter the market in 2014. At the 2015 Consumer Electronics Show in Las Vegas, a consortium of Haier, Astronautics Corporation of America and BASF presented the first cooling appliance.[20] BASF claim of their technology a 35% improvement over using compressors[21]

Thermal and magnetic hysteresis problems remain to be solved for first-order phase transition materials that exhibit the GMCE.[15]

One potential application is in spacecraft.

Vapor-compression refrigeration units typically achieve performance coefficients of 60% of that of a theoretical ideal Carnot cycle, much higher than current MR technology. Small domestic refrigerators are however much less efficient.[22]

In 2014 giant anisotropic behaviour of the magnetocaloric effect was found in HoMn
2O
5 at 10 K. The anisotropy of the magnetic entropy change gives rise to a large rotating MCE offering the possibility to build simplified, compact, and efficient magnetic cooling systems by rotating it in a constant magnetic field.[23]

The effect was discovered using nickel in 1917 by French physicist Pierre Weiss and Auguste Piccard.[24] Originally, the cooling effect was less than 0.5 K/T.

Major advances first appeared in the late 1920s when cooling via adiabatic demagnetization was independently proposed by Peter Debye in 1926 and chemistry Nobel Laureate William F. Giauque in 1927.

It was first demonstrated experimentally by Giauque and his colleague D. P. MacDougall in 1933 for cryogenic purposes when they reached 0.25 K.[25] Between 1933 and 1997, advances in MCE cooling occurred.[26]

A major breakthrough came 2002 when a group at the University of Amsterdam demonstrated the giant magnetocaloric effect in MnFe(P,As) alloys that are based on abundant materials.[27]

Refrigerators based on the magnetocaloric effect have been demonstrated in laboratories, using magnetic fields starting at 0.6 T up to 10 T. Magnetic fields above 2 T are difficult to produce with permanent magnets and are produced by a superconducting magnet (1 T is about 20,000 times the Earth's magnetic field).

In one example, Prof. Karl A. Gschneidner, Jr. unveiled a proof of concept magnetic refrigerator near room temperature on February 20, 1997. He also announced the discovery of the GMCE in Gd
5Si
2Ge
2 on June 9, 1997.[9] Since then, hundreds of peer-reviewed articles have been written describing materials exhibiting magnetocaloric effects.