It was named for the Magnitnaya Mountain that was almost pure iron, a geological anomaly. It is the second largest city in Russia that does not serve as an administrative center of either a federal subject or an administrative division. The largest iron and steel works in the country, Magnitogorsk Iron and Steel Works, is located here. 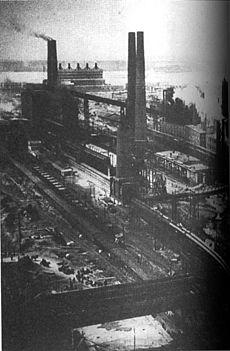 A steel production facility in Magnitogorsk in the 1930s 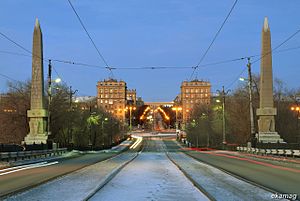 A bridge in Magnitogorsk

Magnitnaya was founded in 1743 as part of the Orenburg Line of forts established under the Empress Elizabeth. By 1747 the Russian settlement was large enough to justify the building of the small wooden "Church of the Holy Trinity".

In 1752 two entrepreneurs called Tverdysh and Myasnikov started investigating the possibility of mining the ore for which the area would later become famous, and having established that there were no pre-existing rights to the Magnitnaya Mountain ore, the two petitioned for the right to extract it themselves. Their petition was granted and iron ore extraction began in 1759.

As a part of preparation for the Soviet Five-Year Plans in 1928 a Soviet delegation arrived in Cleveland, Ohio to discuss with American consulting company Arthur G. McKee a plan to set up in Magnitogorsk a copy of the US Steel steel mill in Gary, Indiana. The contract was four times increased and eventually the new plant had a capacity of over four million tons annually.[7]

The rapid development of Magnitogorsk stood at the forefront of Joseph Stalin's Five-Year Plans in the 1930s. It was a showpiece of Soviet achievement. Huge reserves of iron ore in the area made it a prime location to build a steel plant capable of challenging its Western rivals. However, a large proportion of the workforce, as ex-peasants, typically had few industrial skills and little industrial experience. To solve these issues, several hundred foreign specialists arrived to direct the work, including a team of architects headed by the German Ernst May. 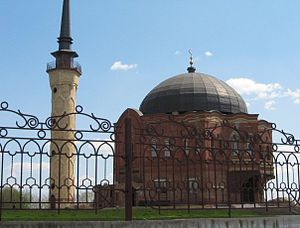 According to original plans Magnitogorsk was to be inspired by Gary and Pittsburgh, at the time the most prominent centers of steel production in the United States. It was to have followed the linear city design, with rows of similar superblock neighborhoods running parallel to the factory, with a strip of greenery, or greenbelt, separating them. Planners would align living and production spheres so as to minimize necessary travel time: workers would generally live in a sector of the residential band closest to the sector of the industrial band in which they worked.

However, by the time that May completed his plans for Magnitogorsk construction of both factory and housing had already started. The sprawling factory and enormous cleansing lakes had left little room available for development, and May, therefore, had to redesign his settlement to fit the modified site. This modification resulted in a city being more "rope-like" than linear. Although the industrial area is concentrated on the left bank of the river Ural, and the most residential complexes are separated and located on its right bank, the city inhabitants are still subjected to noxious fumes and factory smoke.[citation needed]

The book Behind the Urals, by John Scott, documents the industrial development of Magnitogorsk during the 1930s. Scott discusses the fast-paced industrial and social developments during Stalin's first five-year plan and the rising paranoia of the Soviet regime preceding the Great Purge of the late 1930s.

In 1937 foreigners were told to exit and Magnitogorsk was declared a closed city. There is not much reliable information about events and development of the city during the closed period.

The city played an important role during World War II because it supplied much of the steel for the Soviet war machine and its strategic location near the Ural Mountains meant Magnitogorsk was safe from seizure by the German Army.

During perestroika the closed city status was removed and foreigners were allowed to visit the city again. Years after perestroika brought a significant change in the life of the city, the Iron and Steel Plant was reorganized as a joint-stock company Magnitogorsk Iron and Steel Works (MISW or MMK), which helped with the reconstruction of the railway and building a new airport.

With the depletion of the substantial local iron-ore reserves, Magnitogorsk has to import raw materials from Sokolvsko-Sarbaisky deposit in northern Kazakhstan.[citation needed]

The city is connected by the Magnitogorsk International Airport and by a railway. Public transportation includes trams, buses, and taxis. 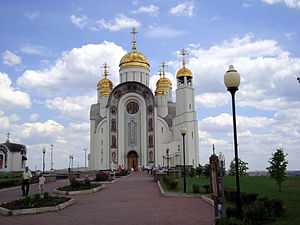 Magnitogorsk Church of the Ascension of the Lord

There are also three theatres: Pushkin Drama Theatre (the oldest in the city), the Opera and Ballet House, and the Puppet Theatre. The Church of the Ascension of the Lord opened in 2004.

The town's football team is FC Magnitogorsk playing in the Amateur Football League. Located in the vicinity of the city, Abzakovo is a popular mountain skiing base built by the MMK (see the URL below).

Magnitogorsk was mentioned in the Blacksmith Institute's 2007 survey of the world's worst polluted cities, placed in the report's unranked list of the 25 most polluted places outside the top ten. Pollutants include lead, sulfur dioxide, heavy metals and other air pollutants. According to the local hospital, only 1% of all children living in the city are in good health. The Blacksmith Institute says that, according to a local newspaper report, "only 28% of infants born in 1992 were healthy, and only 27% had healthy mothers". However, according to Blacksmith Institute, plant managers have upgraded much of their equipment in recent years and emissions have been reduced by about 60%.[8]

Magnitogorsk has a distinct four-season humid continental climate[9] similar to those found in the North American Plains with warmer summers than subarctic climates, but with relatively severe winters for the latitude. This climate type is typical for southerly Russian areas far from large bodies of water. The average July high is around 25 °C (77 °F) with lows of 13 °C (55 °F) with January averages ranging from −10 °C (14 °F) in daytime high to −18 °C (0 °F) in average low.[10] Temperatures approaching 34 °C (93 °F) or above have been measured from May to September with real severe frosts below −36 °C (−33 °F) have been measured in all other months than that except transitional months April and October.[10]

The city is twinned with:

The book is about Magnitogorsk, its history and natural resources