Magonism[1][2] (Spanish: Magonismo) is an anarchist, or more precisely anarcho-communist,[3][4] school of thought precursor of the Mexican Revolution of 1910. It is mainly based on the ideas of Ricardo Flores Magón,[5] his brothers Enrique and Jesús, and also other collaborators of the Mexican newspaper Regeneración (organ of the Mexican Liberal Party), as Práxedis Guerrero, Librado Rivera and Anselmo L. Figueroa.[6][7] 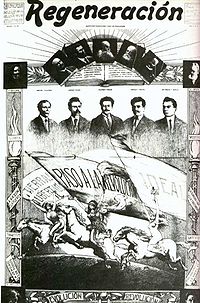 Cover of Regeneración, with portraits of the organizing board of PLM and European anarchists (1910)

The Mexican government and the press of the early 20th century called as magonistas people and groups who shared the ideas of the Flores Magón brothers, who inspired the overthrow of the dictatorship of Porfirio Díaz and perform an economic and not only political revolution. The fight against tyranny encouraged by the Flores Magón contravened official discourse of Porfirian Peace by which the protesters were rated as the Revoltosos Magonistas (i.e. "Magonist rioters") to isolate any social basis and preserve the image of peace and progress imposed by force.[8]

Both Flores Magón brothers, like other members of the Mexican Liberal Party (PLM), used the term magonista[9] to refer to the libertarian movement that promoted; as they felt they were fighting for an ideal and not to elevate in power to a boss or a group, they called themselves "liberals", as they were organized in the PLM, and later "anarchists". The same Ricardo Flores Magón affirmed: Liberal Party members are not magonistas, they are anarchists!. In his literary work Verdugos y Víctimas (i.e. "Executioners and Victims"),[10] one of the characters responds indignantly when he was arrested and judged: I'm not a magonist, I am an anarchist. An anarchist has no idols.

Magonist thinking was influenced by anarchist philosophers such as Mikhail Bakunin and Pierre-Joseph Proudhon, and others such as Élisée Reclus, Charles Malato, Errico Malatesta, Anselmo Lorenzo, Emma Goldman, Fernando Tarrida del Mármol and Max Stirner. They were also influenced by the works of Marx, Gorky and Ibsen. However, the most influential works were the ones of Peter Kropotkin The Conquest of Bread and Mutual Aid: A Factor of Evolution, at the same time they were influenced by the Mexican liberal tradition of the 19th century and the self-government system of the indigenous people.[11]

Indigenous peoples, since the Spanish conquest of Mexico, searched to preserve the practice of direct democracy, decision-making in assembly, rotation of administrative charges, the defense of communal property, mutual aid as the community exploitation and rational use of natural resources, shared anarchist principles raised by the magonists.[12]

The direct influence of indigenous thought in magonism were the teachings of Teodoro Flores,[13] mestizo Nahua, father of the Flores Magón brothers, and the coexistence of other members of the PLM with indigenous groups during periods of organization and insurrection of PLM, between 1905 and 1910, such as the Popoluca in Veracruz, the Yaqui and Mayo in Sonora, and the Cocopah in Baja California.

Fernando Palomares, a Mayo indigenous, was one of the most active members of the Liberal Party who took part in the Cananea strike and libertarian campaign of 1911 in Mexicali and Tijuana.[14][15] 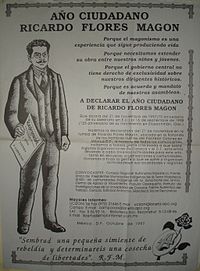 After the end of the armed phase of Mexican Revolution, and after the death of Ricardo Flores Magón in 1922, began the rescue of magonist thought, mainly due to trade unionists in Mexico and the United States. In the post-revolutionary Mexico, the figures of Flores Magón brothers was recollected by governments, considering them precursors of the revolution. Both the insurrection of 1910 as social rights enshrined in the Mexican Constitution of 1917 was due largely to the magonistas, which since 1906 took up arms and drafted an economic and social program.[16]

However, although the demands that led to the revolution in theory were resolved in the Constitution and in the speeches of the revolutionary governments, there was no significant change in the lives of the most vulnerable populations. Also the magonistas considered not fighting to change the administrators of the state, but to abolish them. For this reason, the survived magonistas continued to spread anarchist propaganda. Librado Rivera was persecuted and imprisoned during the government of Plutarco Elías Calles and Enrique Flores Magón, who believed that the Mexican social revolution is not yet over,[17] could enjoy security until the presidency of Lázaro Cárdenas.

The Mexican Anarchist Federation, founded in 1941 and active for about 40 years, edited the newspaper Regeneración and spread magonist thought.

In the 1980s the magonism survived among some youth anarcho-punk groups. The Biblioteca Social Reconstruir, founded in 1980 by the Spanish anarchist in exile Ricardo Mestre and located in Mexico City, was a library where to find anarchist literature and works on Ricardo Flores Magón or copies of Regeneración.[18]

In 1994, when the Zapatista Army of National Liberation (EZLN) took up arms in Chiapas, claimed the ideas of the Flores Magón brothers. In 1997, indigenous organizations, social groups of libertarians and municipal councils of the state of Oaxaca, declared the "Citizen Year of Ricardo Flores Magón" from 21 November (1997) to 16 September 1998.[19]

In August 2000, driven by indigenous organizations in the State of Oaxaca and libertarian groups in Mexico City, the Magonistas Days (Jornadas Magonistas) were held for the 100 years of the founding of the newspaper Regeneración. In the popular uprising of Oaxaca of 2006, took part organizations and youth groups also influenced by anarchist magonistas ideals.[20]