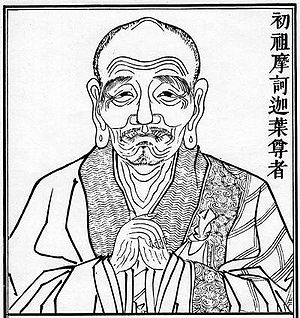 Traditional Chinese illustration of Mahākāśyapa from a woodblock print 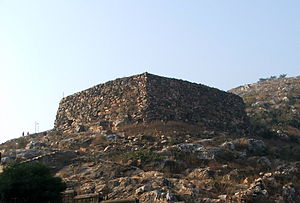 Pipphali Cave in Rajgir, where Maha Kassappa is recorded to have stayed.

Mahākāśyapa (Sanskrit; Pali: Mahākassapa; Japanese: 摩訶迦葉 Maha Kasho or Makakasho) or Kāśyapa was one of the principal disciples of Gautama Buddha and convened and directed the First Buddhist council. He came from the kingdom of Magadha.

Mahākāśyapa is one of the most revered of the Buddha's early disciples, foremost in ascetic practices. He is often depicted in statuary together with Ananda, each standing to one side of the Buddha.

In the Lotus Sutra

In Lotus Sutra Chapter 6 (Bestowal of Prophecy), the Buddha bestows prophecies of enlightenment on the disciples Mahakashyapa, Subhuti, Maha Katyayana, and Mahamaudgalyayana.

According to Zen tradition,[1] Mahākāśyapa was the first to receive Dharma transmission from Gautama Buddha.[2] Zen purports to lead its adherents to insights akin to that mentioned by Śākyamuni Buddha in his Flower Sermon in which he held up a white flower and just admired it in his hand.[3] All the other disciples just looked on without knowing how to react, but Mahākāśyapa smiled faintly, and Śākyamuni Buddha picked him as one who truly understood him and was worthy to be his successor.[4] (This can be explained thus: Mahākāśyapa's spiritual attainment had reached the point where he could understand the hidden meanings conveyed by the Buddha's act, as two people who have gone through the same experiences understand each other completely.)

The words of the Śākyamuni Buddha addressed to Mahākāśyapa are described below:[5]

I possess the true Dharma eye, the marvelous mind of Nirvana, the true form of the formless, the subtle dharma gate that does not rest on words or letters but is a special transmission outside of the scriptures. This I entrust to Mahākāśyapa.[5]

Thus, a way within Buddhism developed which concentrated on direct experience rather than on rational creeds or revealed scriptures. Zen is a method of meditative religion which seeks to enlighten people in the manner that Mahākāśyapa experienced.[4]

Mahākāśyapa was the first, leading the line of transmission;
Twenty-eight Fathers followed him in the West;
The Lamp was then brought over the sea to this country;
And Bodhidharma became the First Father here:
His mantle, as we all know, passed over six Fathers,
And by them many minds came to see the Light.[7]

According to Chinese legend, the monk Ji Gong is a reincarnation of Mahākāśyapa (known as the Taming Dragon arhat).

Mahakasyapa's entire body was enshrined underneath the mountain Kukkutapada where it is said to remain until the appearance of Maitreya.[8] Pali sources say that beings in Maitreya's time will be much bigger than during the time of Sakyamuni. In one prophecy, his disciples are contemptuous of Mahakasyapa, whose head is no larger than an insect to them. Buddha's robe barely covers two of their fingers, making them wonder how tiny Buddha was. Mahakasyapa is said to be small enough in comparison to cremate in the palm of Maitreya's hand.[9] Mahakasyapa wears the pamsukula robe. [10]