From Infogalactic: the planetary knowledge core
Jump to: navigation, search
This article is about the Tirthankara of Jainism. For the Jain mathematician, see Mahāvīra (mathematician).
Not to be confused with Mahavihara.

Mahavira, also known as Vardhamana, was the twenty-fourth and last tirthankara. In Jainism, a tirthankara (maker of the river crossing) is an omniscient teacher who preaches the dharma (righteous path) and builds a ford across the ocean of rebirth and transmigration. Twenty-four tirthankara grace each half of the cosmic time cycle. Mahavira was the last tirthankara of avasarpani (present descending phase).[note 1][6] Mahavira was born into a royal family in what is now Bihar, India. At the age of 30, he left his home in pursuit of spiritual awakening. He abandoned all the worldly things including his clothes and became a Jain monk.[5] For the next twelve and a half years, he practiced intense meditation and severe penance, after which he became omniscient. He traveled all over South Asia for the next thirty years to teach Jain philosophy. Mahavira died at the age of 72 and attained nirvana (final release) or moksha (liberation from the cycle of birth and death).[7] Mahavira's philosophy has eight cardinal (law of trust) principles, three metaphysical (dravya, jiva and ajiva),[8] and five ethical. The objective is to elevate the quality of life.[9]

Mahavira's childhood name was Vardhamana, which means the one who grows, because of the increased prosperity in the kingdom at the time of his birth.[10] He was called Mahavira (the Great Hero) because of the acts of bravery he performed during his childhood.[11][12][13][14] Mahavira was given the title Jīnā (the "Victor" or conqueror of inner enemies such as attachment, pride and greed), which subsequently became synonymous with Tirthankara.[15]

Buddhist texts refer to Mahavira as Nigaṇṭha Jñātaputta.[16] Nigaṇṭha means "without knot, tie, or string" and Jñātaputta (son of Natas), referred to his clan of origin Jñāta or Naya (Prakrit).[15][17][18] He is also known as Sramana.[11]

Although there is reasonable evidence that Parshvanatha, predecessor of Mahavira was a historical figure,[24] Mahavira is still sometimes referred to as the founder of Jainism. On this, famous Indologist Heinrich Zimmer noted:

The foundation of Jainism has been attributed by Occidental historians to Mahavira. There must be some truth in the Jaina tradition of the great antiquity of their religion. We have grounds for believing that he (Parsva) actually lived and taught and was a Jaina.

Mahavira's teachings form the basis for Jain texts. Jain texts prescribe five major vows (vratas) that both ascetics and householders have to follow.[26] These are five ethical principles that were preached by Mahavira:

Mahavira also taught that pursuit of pleasure is an endless game, so we should train our minds to curb individual cravings and passions. That way one does achieve equanimity of mind, mental poise and spiritual balance. One should voluntarily limit acquisition of property as a community virtue which results in social justice and fair distribution of utility commodities. The strong and the rich should not try to suppress the weak and the poor by acquiring limitless property which results in unfair distribution of wealth in society and hence poverty. Attempting to enforce these five qualities by an external and legal authority leads to hypocrisy or secret criminal tendencies. So the individual or society should exercise self-restraint to achieve social peace, security and an enlightened society.[28]

Another fundamental teaching of Mahavira was Anekantavada[29] i.e., pluralism and multiplicity of viewpoints. Mahāvīra employed anekānta extensively to explain the Jain philosophical concepts. Taking a relativistic viewpoint, Mahāvīra is said to have explained the nature of the soul as both permanent from the point of view of underlying substance (nīshyānay), and temporary, from the point of view of its modes and modification.[30] 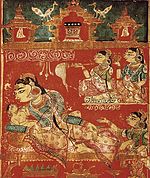 Mahavira was born into the royal Kshatriya family of King Siddhartha and Queen Trishala (sister of King Chetaka of Vaishali).[22] He was born on the thirteenth day of the rising moon of Chaitra in the Vira Nirvana Samvat calendar.[31][32] In the Gregorian calendar, this date falls in March or April and is celebrated as Mahavir Jayanti.[33] His Gotra was Kashyapa.[11][22] Traditionally, Kundalapura in the ancient city of Vaishali is regarded as his birthplace; however, its location remains unidentified.[34]

As the son of a king, Mahavira had all luxuries of life at his disposal. Both his parents were strict followers of Parshvanatha.[10] Jain traditions are not unanimous about his marital state. According to Digambara tradition, Mahavira's parents desired that he should get married to Yashoda but Mahavira refused to marry.[35] According to Svetambara tradition, he was married young to Yashoda and had one daughter, Priyadarshana.[22][36]

At the age of 30, Mahavira abandoned all the comforts of royal life and left his home and family to live an ascetic life in the pursuit of spiritual awakening. He went into a park called Sandavana in the surroundings of Kundalpur. He underwent severe penances, meditated under the Ashoka tree and went without clothes.[12] There is graphic description of hardships and humiliation he faced in the Acharanga Sutra. In the eastern part of Bengal he suffered great distress. Boys pelted him with stones, people often humiliated him.[36] 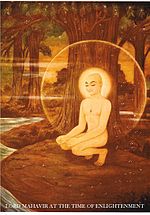 Attainment of omniscience kevalajñāna by Mahavira

After twelve and a half years of rigorous penance, i.e. at the age of forty-three, Mahavira achieved the state of Kevala Jnana. Kevala means "isolation-integration" and Jnana means knowledge. This implies omniscience and release from earthly bondage-corresponding to the "enlightenment" (bodhi) of the Buddhas.[38] This happened under a Sala-tree on the banks of the river Rjupalika (today Barakar) near a place called Jrmbhikagrama.[39] The Acharanga sutra describes Mahavira as all-seeing. The Sutrakritanga elaborates the concept as all-knowing and provides details of other qualities of Mahavira.[34]

For a period of 30 years after omniscience, Mahavira traveled far and wide in India to teach his philosophy. According to the tradition, Mahavira had 14,000 ascetics, 36,000 nuns, 159,000 sravakas (laymen) and 318,000 sravikas (laywomen) as his followers.[40][41] Some of the royal followers included King Srenika (popularly known as Bimbisara) of Magadha, Kunika of Anga and Chetaka of Videha.[37][8]

According to Jain texts, Mahavira attained moksha i.e., his soul is believed to have become Siddha (soul at its purest form).[21] On the same day Gautama, his Ganadhara (chief disciple) attained Kevala Jnana. According to Mahapurana, after the nirvana of tirthankaras, devas do the funeral rites. According to Pravachansar, only nails and hair of tirthankaras are left behind, and rest of the body gets dissolved in the air like camphor.[42][43] Mahavira is usually depicted in a sitting or standing meditative posture with a symbol of a lion under him.[44] Today, a Jain temple, called Jal Mandir stands at the place where Mahavira is believed to have attained moksha.[45]

Mahavira's previous births are discussed in Jain texts such as the Trishashtishalakapurusha Charitra and Jinasena's Mahapurana. While a soul undergoes countless reincarnations in transmigratory cycle of saṃsāra, the births of a Tirthankara are reckoned from the time he determined the causes of karma and developed the Ratnatraya. Jain texts discuss twenty-six births of Mahavira prior to his incarnation as a Tirthankara.[37] Mahavira was born as Marichi, the son of Bharata Chakravarti in one of his previous births.[46]

There are various Jain texts like Kalpa Sūtra that describe the life of Mahavira. The first Sanskrit biography of Mahavira was Vardhamacharitra by Asaga in 853 AD.[47]

Mahavira's teachings influenced many personalities. Mahatma Gandhi was greatly influenced by Mahavira and said, "Bhagwan Mahavira is sure to be respected as the highest authority on Ahimsa. If anyone has practiced to the fullest extent and has propagated most the doctrine of Ahimsa, it was Lord Mahavira."[48][49]

Mahavira proclaimed in India, the message of salvation, that religion is a reality and not a mere social convention, that salvation comes from taking refuge in the true religion and not from observing the external ceremonies of the community, that religion cannot regard any barriers between man and man as an eternal variety. Wonderous to say, this teaching rapidly over topped the barriers of the race abiding instinct and conquered the whole county.

A major event is associated with the 2500th anniversary of Nirvana of Mahavira in the year 1974. In this context, Padmanabh Jaini writes[50]

Probably few people in the West are aware that during this Anniversary year for the first time in their long history, the mendicants of the Śvētāmbara, Digambara and Sthānakavāsī sects assembled on the same platform, agreed upon a common flag (Jaina dhvaja) and emblem (pratīka); and resolved to bring about the unity of the community. For the duration of the year four dharma cakras, a wheel mounted on a chariot as an ancient symbol of the samavasaraṇa (Holy Assembly) of Tīrthaṅkara Mahāvīra traversed to all the major cities of India, winning legal sanctions from various state governments against the slaughter of animals for sacrifice or other religious purposes, a campaign which has been a major preoccupation of the Jainas throughout their history.